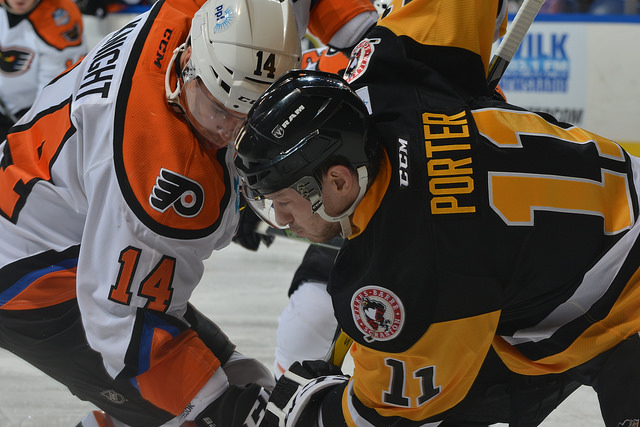 Aube-Kubel Scores at Wilkes-Barre for 7th of Season

Wilkes-Barre, PA – Nicolas Aube-Kubel scored his seventh of the season but the Phantoms comeback efforts were eventually dashed by a late Penguins’ surge in a 5-1 Valentine’s Day final in Wilkes-Barre Township on Tuesday evening. Oskar Sundqvist (15th, 16th) led the first-place Penguins with a pair of goals.

The result evens the season series at 2-2 between the top two teams in the Eastern Conference. The home team has won all four games of the rivalry series that still has eight more encounters on tap beginning with a February 25th rematch at PPL Center. 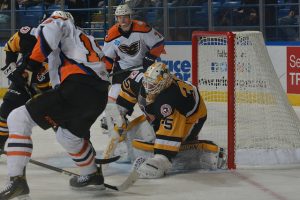 The Phantoms’ record moved to 32-15-2 with the result as the team suffered consecutive regulation losses for just the second time all season. In 49 games on the 2016-17 campaign, Lehigh Valley’s longest losing streak is just two which happened on October 29-30 and again on February 11-14.

The Phantoms overall record in 11 total Valentine’s Day games stands at 4-4-1-2 overall. First-place Wilkes-Barre/Scranton improved their league-leading mark to 37-11-3 as Tristan Jarry recorded 27 stops for the win. Anthony Stolarz made 38 stops in the Phantoms cause.

The game marked the 700th professional contest for Chris Conner who had some of the best seasons of his career in the Penguins organization with both Wilkes-Barre/Scranton and Pittsburgh. 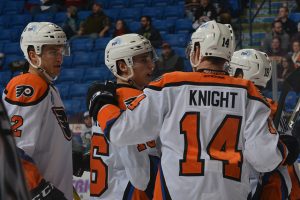 The Phantoms were without some of their key players who were absent from the lineup due to injuries; Taylor Leier, Scott Laughton and Boyd Gordon.

The game could easily have gone back for the Phantoms but every time they needed a key bounce or an officials’ decision it just wasn’t to be….or Jarry would make a big save. Colin McDonald thought he had put the Phantoms on the board in the opening minutes of the second period when a puck bounced off the top of the net and deflected into the goal behind Jarry but the officials waived off the key strike on high sticking. 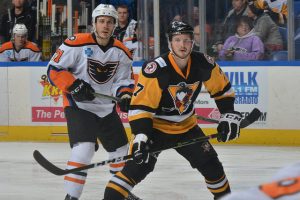 Wilkes-Barre/Scranton gained early momentum with a power-play conversion by Derrick Pouliot (4th) from the right point at 5:37 for a 1-0 advantage. Dominik Simon (8th) struck at 17:03 on a steal in the corner by Jean-Sebastian Dea to make it 2-0 at the first intermission.

Lehigh Valley had a carry-over power play to begin the second period but Oskar Sundqvist raced away and barely tapped through his shorthanded opportunity past the skates of Anthony Stolarz for a 3-0 Penguins advantage.

Just seconds later came McDonald’s apparent conversion from behind the net but the tally that was initially ruled a goal was eventually waived off after the officials’ discussion.

Lehigh Valley would strike at 9:10 into the second period when rookie Aube-Kubel rushed up the left-wing for a sharp-angle shot that went off the pads of Jarry. Aube-Kubel follwed his shot, picked up the rebound and then went wide behind the net for an opportunity on the other side which he rifled through Jarry to cut the deficit to 3-1. 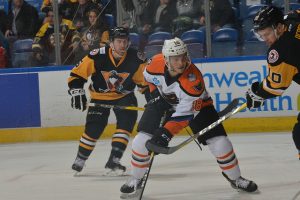 “I took the puck in neutral zone with speed,” Aube-Kubel said. “I just wanted to put the puck on the net and create some chances. And then the wrap-around I got lucky when it hit their player.”

The Phantoms had the better of the play for almost the entirety of the second period but the wind was taken out of their sails when Dominik Simon found Dea on the right boards to snipe over the near shoulder of Stolarz and off the back-bar and back out. Dea’s 13th of the season in the closing minutes of the second period provided the Penguins with a 4-1 lead after 40 minutes.

Andy Miele rushed forward with Greg Carey on a 2-on-1 for a glorious opportunity to snag one of them back but Miele’s drive rang off the left post and out. Greg Carey had numerous opportunites on the day but his powerful blasts were either swallowed in by Jarry or were just glanced away.

Oskar Sundqvist concluded the scoring at 4:20 into the third with his offering from the left corner that appeared to deflect some off Samuel Morin and then off the leg of Stolarz on an unfortunately sequence of bounces.

The Penguins out shot Lehigh Valley 43-28. The Phantoms were 0-for-6 on the power play while Wilkes-Barre/Scranton finished 1-for-7.

The Phantoms return to PPL Center this weekend for a pair of games against the Hartford Wolf Pack. Friday night is meLVin’s Birthday Bash with all his mascot friends. Saturday is 90’s Night as the Phantoms bring on the retro-style fun. Tickets for upcoming Phantoms home games are available online HERE.