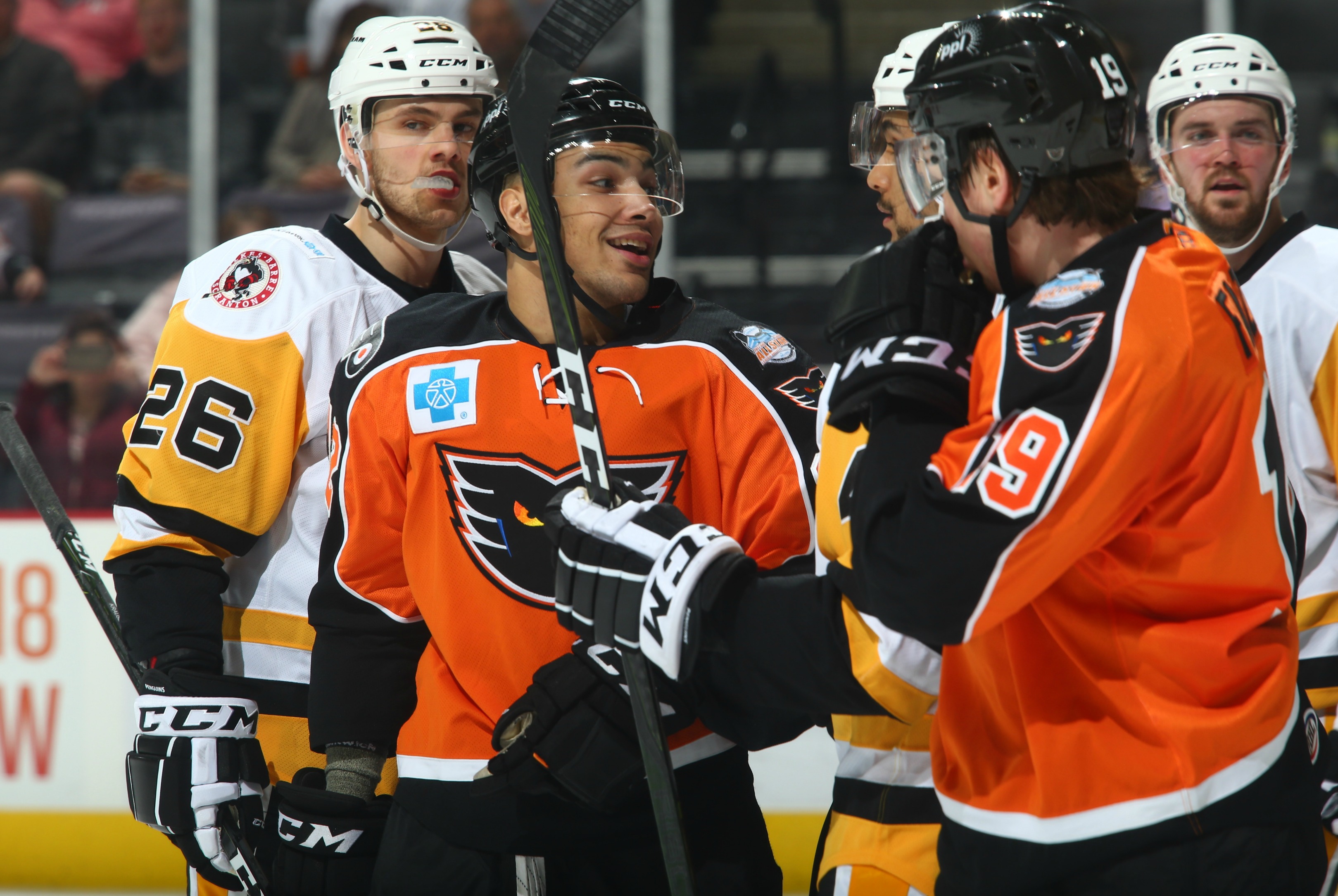 Lehigh Valley, PA – The AHL’s postseason doesn’t officially get underway for nearly a month but there was a playoff atmosphere inside PPL Center Saturday evening as the Lehigh Valley Phantoms welcomed their in-state rivals, the Wilkes-Barre/Scranton Penguins, to downtown Allentown. Entering Saturday’s tilt, just three standings points separated the Phantoms and Penguins for the top spot in the Atlantic Division as the two sides continue to push towards the 2017 Calder Cup Playoffs. 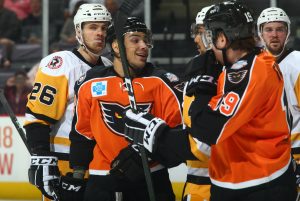 It was the visiting Penguins though who found a way to outlast the Phantoms as goaltender Tristan Jarry authored a 35-save gem as part of a 4-0 win in front of a standing room-only sellout crowd of 8,836 raucous fans. All told, Lehigh Valley out shot Wilkes-Barre/Scranton 35-30 but it was the last line of defense in Jarry who handed the Phantoms just their third setback over the team’s last nine games (6-2-1).

Lehigh Valley’s Alex Lyon turned in a solid effort of his own between the pipes with 26 saves on 30 Penguins’ shots. 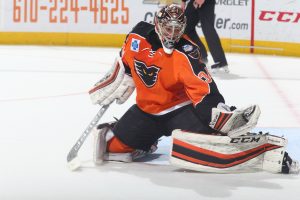 Despite Saturday’s result, the Phantoms remained in sole possession of second place in the tightly-contested Atlantic Division. What’s more, Lehigh Valley’s magic number (points needed to guarantee a spot in the 2017 Calder Cup Playoffs) shrunk to 14 following the Bridgeport Sound Tigers’ 4-3 loss at the hands of the Hartford Wolf Pack. The Phantoms are now 42-20-4 overall this season and continue to boast the second-most wins in the Eastern Conference (42) along with the Easts’ second-highest standings points total (88).

Saturday’s game marked the return of third-year defenseman Robert Hagg to Lehigh Valley’s lineup. A second-round selection (#41 overall) by the Philadelphia Flyers in the 2013 NHL Entry Draft, Hagg had missed the previous 10 games due to injury and is in the midst of a strong campaign in which he’s tallied seven goals, seven assists and 14 points across 50 games. 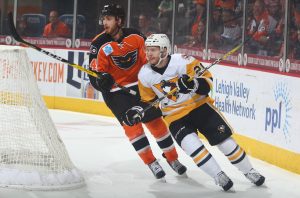 Saturday’s rivalry showdown was skated in front of yet another standing room-only sellout crowd within PPL Center. With Saturday’s capacity crowd, Phantoms fans have now produced 15 sellouts overall this season and have generated standing room-only sellout crowds in seven of Lehigh Valley’s last 10 home outings. Saturday’s crowd (8,836) marked the second-largest crowd to enjoy a Phantoms game at PPL Center this season behind only the 8,869 fans who were on hand when Lehigh Valley tangled with Wilkes-Barre/Scranton back on February 25.

The Penguins opened the scoring just past the midway point of the first period when a seemingly kicked-in conversion by Blueger was allowed to stand 12:58 into the opening frame. After a side-angle stash by Blueger was denied by Lyon, the Wilkes-Barre/Scranton forward directed the disc just inside the right post with his skate for his sixth goal of the season. Kostopoulos and Zach Aston-Reese assisted on the even-strength strike, which proved to be the only goal scored in the first period of play despite a combined 17 shots on goal. 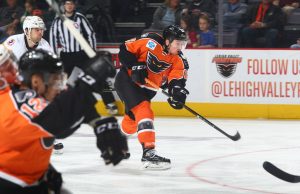 The Penguins doubled their lead just over five minutes into the second stanza when Barry Goers’ offering from the right point was expertly redirected atop the Lehigh Valley goal crease by Krause and into the back of the Phantoms’ cage. Brett Stern collected the secondary assist on Krause’s first goal of the year, which came 5:07 into the middle frame.

Wilkes-Barre/Scranton extended its advantage to a 3-0 edge a little over seven minutes later when a centering pass by Troy Josephs inadvertently deflected off the skate of Penguins’ forward Burton before sliding between Lyon’s pads and across the goal line. Josephs and Krause assisted on the five-on-five conversion netted 12:18 into the second period, which marked Burton’s fifth tally of the season.

The Penguins made the final dent on the score sheet with just over a minute left in regulation when, while on the power play, Kostopoulous poured in his team-leading 24th goal of the year. Tim Erixon and Aston-Reese assisted on the man-advantage marker scored 18:46 into the final frame.

The Phantoms are back in action at PPL Center on Sunday, March 26 when they welcome the Bridgeport Sound Tigers, AHL affiliate of the New York Islanders, to downtown Allentown for a 5:05 p.m. showdown. Enjoy two games for the price of one on Sunday as the annual Guns N’ Hoses game (Lehigh Valley Police vs. Lehigh Valley Firefighters) immediately follows the Phantoms clash with the Sound Tigers.

A limited number of tickets remain for Sunday’s game and can be purchased HERE.