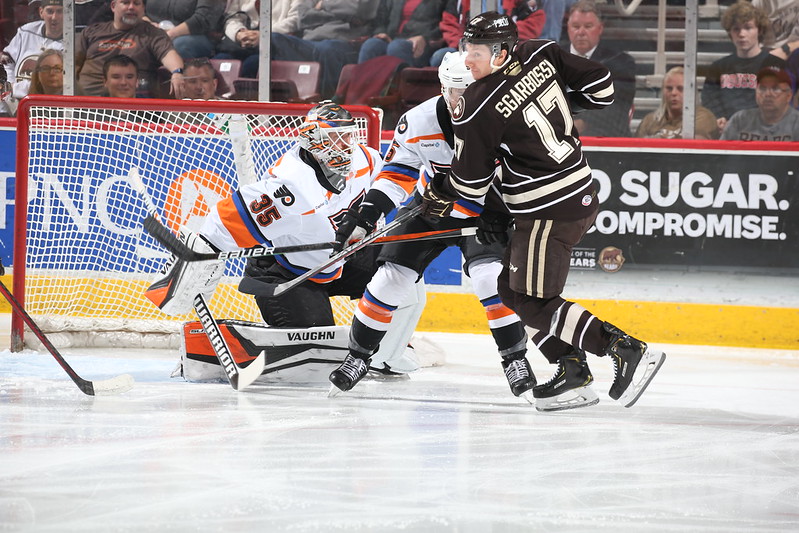 Hershey, PA – Pat Nagle maneuvered one way and pushed across the other way as he stopped everything the Hershey Bears’ relentless attack threw at him throughout the game in a 42-save masterpiece at Giant Center on Saturday night. The 2-0 victory, in which the Phantoms were outshot 42-20, set a new Lehigh Valley record for most saves in a shutout and was the third-highest total of saves in a shutout in Phantoms’ franchise history. The night marked the final away game of the season for the Phantoms.

Cooper Zech (1st) and Linus Sandin (7th) scored against Zach Fucale in the third period to break a scoreless tie and that was all Nagle needed. Lehigh Valley held the Bears to 0-for-7 on the power play, including 1:20 of 5-on-3 advantage for Hershey in the first period. The Phantoms also killed almost 3:30 of a 6-on-5 attack at the end of regulation after the Bears had pulled their goalie for an extra skater.

Nagle recorded his second shutout of the season and also his second career AHL shutout. The 34-year-old veteran has spent the majority of his career in the ECHL where his 202 wins rates third-most all-time in league history. He also has 16 shutouts in the ECHL. But he never had one in the AHL until January 29 at Hartford in his last game with the Phantoms before departing for the Olympics.

That was a special moment. But this one was an even more magnificent performance with some of the showstopping saves he came up with in successfully frustrating the Hershey Bears who were shut out for the third time in their last four games. 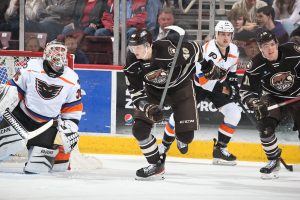 A double-save sequence off his right pad down low in the second period drew ooh’s and ah’s. His point-blank save diving across with the glove in the third period again served notice that he would not be beaten in this game. The closest the Bears came to scoring was probably in the second period when Brett Leason was sprung free on a breakaway and rifled a shot past the glove of Nagle that rang off the post and rebounded directly out.

Another try in the second period appeared to handcuff Nagle and got behind him in the blue paint but Zech was there to sweep it out of harm’s way.

The Phantoms were being outshot 31-12 when Lehigh Valley pushed its way into the zone in the opening minutes of the third period. Isaac Ratcliffe in the left circle drew a pair of defenders while Linus Sandin was also tied up in the vicinity and taken down with a Hershey player. Ratcliffe nudged the puck toward the slot which the defense had left open and the hustling Zech, trailing the play, zoomed right up there to slam home his first goal of the season past the glove of Fucale for a 1-0 lead at 1:57 into the third period.

The Phantoms had another strong sequence to double their advantage a few minutes later. Ratcliffe connected with Day driving hard up the right boards.  Inducing a Bears’ defender towards him, Day connected with Sandin in the high-right slot who had time to stop the pass and then fire the critical goal past the glove of Fucale for a 2-0 lead.

Hershey never stopped pressing. And the Phantoms spent the majority of the last 10 minutes of the game down a man while the Bears had their sixth and seventh power plays and then had the pulled goalie. But the team stepped up with several big shot blocks and pass deflections. And Nagle made more and more impressive stops practically all the way to the finish.

One power-play setup in the third period featured a cross-seam pass by Mike Sgarbossa from the right circle finding former Phantom Mike Vecchione inside the left dot. Vecchione offered a strong bid towards the far post from close range but Nagle’s glove was again too good.

The former Lehigh Valley record for most saves in a shutout was set by Dustin Tokarski on February 13, 2018 with 40 denials in a 5-0 win at the Brideport Sound Tigers.

The Phantoms’ franchise record for most saves in a shutout is still held by Scott Munroe who made 46 saves for the Philadelphia Phantoms on November 9, 2008 in a 2-0 win against the Providence Bruins.

The Lehigh Valley Phantoms finished 8-4-2 in the season series against the Hershey Bears. The Phantoms have three home games remaining including First Responders Night on Tuesday when the Phantoms host the Springfield Thunderbirds at PPL Center. The Phantoms also have home games on Wednesday and Saturday.