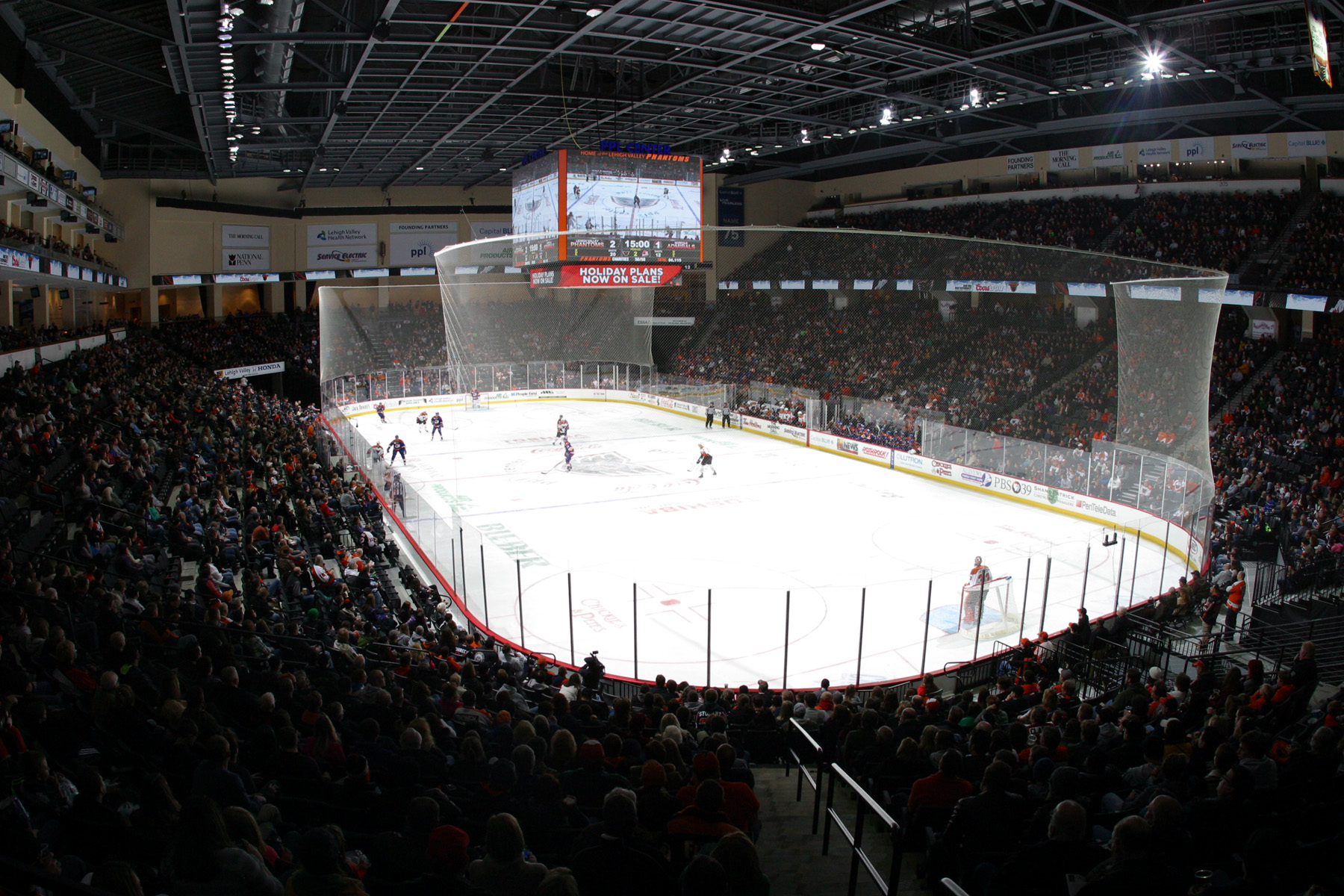 Lehigh Valley, PA – About 500 fans more than the listed seating capacity of PPL Center packed into the Phantoms’ new home on Saturday night and were treated to another thrilling night of hockey in the form of a heart-stopping 3-2 shootout victory over the Norfolk Admirals. Newcomer Adam Comrie, recalled from Reading of the ECHL just a few hours earlier, scored the game-winner in the eighth round in his Phantoms debut. And rookie goalie Martin Ouellette excelled in his first AHL start and was a perfect 8-for-8 in the shootout.

The huge turnout of 8,918 shattered the Lehigh Valley Phantoms previous attendance record of 8,687 established two weeks earlier against the Wilkes-Barre/Scranton Penguins on December 13. Seating capacity of PPL Center is 8,420 so that means there were 498 additional fans packed into every nook and cranny in the spacious venue via Standing-Room Only tickets thus enhancing the electric atmosphere that has become enjoyably common during the team’s inaugural season home contests. It was the seventh sellout of the season for the Phantoms in 15 home games and was also the team’s 10th night drawing 8,000 or more fans. 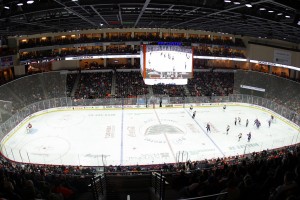 After the game, the players had their own opportunity to thank the fans personally for the incredible atmosphere and noise-level inside PPL Center. Fans were allowed onto the ice after the game to meet the Phantoms on Player Photograph Night in which perhaps another PPL Center record was established: Most Selfies!

Nick Cousins (7th) and Jason Akeson (6th) scored for Lehigh Valley while Zack Stortini posted his first multi-point night with a pair of assists. Akeson added a helper along with his goal for a multi-point performance as well.

Boosted by the tremendous fan support, the Lehigh Valley Phantoms have responded with an impressive home mark of 10-2-3. The Phantoms are on a game four-game home win streak and six-game home point streak (5-0-1). Fans have almost a 50/50 chance of seeing exciting overtime drama when they come to PPL Center where the Phantoms have played 7 of their 15 home dates to an extra session.

The eight-round shootout was truly something to behold. Newcomer Martin Ouellette from the University of Maine and second-year highly-touted prospect John Gibson matched each other save for save through seven gripping rounds before Adam Comrie finally converted in the eighth round with a little, sneaky push through the five-hole Gibson while carry the puck across somewhat from left to right.

“It was great coming in (this morning),” Comrie said. “All the guys were so welcoming. It was so much fun playing in front of all these fans tonight. It’s obviously great to get in the shootout and put one in.”

Throughout the game, Lehigh Valley blasted a team-record 45 shots at John Gibson including nine in the overtime period as Terry Murray’s new line combinations appeared to generate the additional offensive chances he was hoping for. 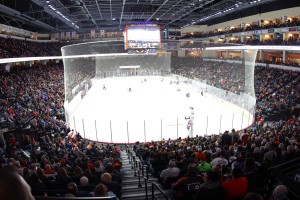 While the offense was getting things cranked up right from the start with 18 shots in the first period. It was Martin Ouellette’s performance on the other end that ended up stealing the show.

“It was a little nerve-wracking at the start,” Ouellette said. “But once you get into the game those nerves go away and you get into a zone. It’s great to get the first win out of the way right away.”

Nick Cousins opened the scoring for Lehigh Valley late in the first period with his double-deflection shot from the top of the left circle. After Zack Stortini neatly found him from behind the goal, Cousins drive banked off two Norfolk Admirals and perfectly to the far-side just past the reaching glove of Gibson for a 1-0 lead at the debut intermission.

Lehigh Valley extended the advantage early in the second with Jason Akeson’s fine power-play goal carrying the puck over from the slot to the right circle then snapping with pinpoint accuracy to the far, high corner beating Gibson’s blocker.

The Phantoms 2-0 lead would last less than two minutes however with Norfolk’s Louis Leblanc slamming home a rebound from the left-circle during an odd-man rush.

Lehigh Valley tried to carry the 2-1 lead all the way to the finish but fell just short. The Admirals equalized with 2:32 to go on a play eerily similar to the winning goal Hershey had scored late in the third period just 24 hours earlier. Chris Wagner found himself open on the back-door on the left of the cage and was able to tip in an impressive-cross ice feed from Max Friberg from the right boards.

The overtime was yet another wild affair as has become typical in the league’s new, experimental format. Ouellette and Gibson were on their toes with one sparking save after another. Lehigh Valley cranked up nine chances at Gibson but were unable to convert in the overtime as well as in the opening seven rounds of the shootout in the spectacular goaltenders’ duel. Petr Straka came the closest in the third round when his shot was drive through the glove of Gibson and almost bounced in. But Gibson got just enough for the puck to bounce in the blue behind him and then barely wide to the right post.

Comrie finished the longest shootout in Lehigh Valley Phantoms history in the eighth round and then Antoine Laganierre never got off a shot when the puck rolled harmlessly off his stick in his chance to equalize in the bottom of the round.

The shootout was the longest for the Phantoms franchise in exactly 366 days. The Adirondack Phantoms won in a nine-round shootout at the Springfield Falcons on a game-winning goal by Kyle Flanagan on December 26, 2013. The longest shootout in Phantoms’ franchise history was April 15, 2015 when Mark Alt converted in the 15th round against the Binghamton Senators. That game was also the second longest shootout in AHL history eclipsed only by a 16-rounder between Utah and Cleveland a decade ago.

Lehigh Valley opens a stretch of five consecutive road games on Wednesday night with a New Year’s Eve clash at the Binghamton Senators at 6:05. The Phantoms’ first games of 2015 will take place on Friday, January 2 and Saturday, January 3 down south in Norfolk, Virginia against the Admirals. Then the Phantoms head way up north to St. John’s, Canada for a pair of contests against the IceCaps on January 10 and 11.

The thrilling win closed out the home-portion of the 2014 schedule and was the last Phantoms home game for nearly three weeks. Lehigh Valley returns to PPL Center on Friday, January 16 against the Albany Devils and Saturday, January 17 at the Binghamton Senators on Legends Night with Bobby Clarke. Tickets are going fast for the next Phantoms’ home games and the jam-packed crowd in the 2014 home finale showcased again the importance of purchasing tickets in advance. Tickets are available at PPLCenter.com or by calling 610-347-TIXX (8499) or by visiting the Mealey’s Furniture Box Office inside PPL Center.