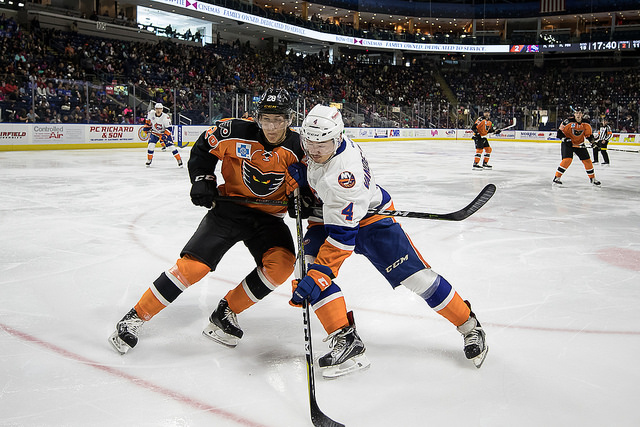 Bridgeport, CT – Danick Martel has been making it look like child’s play. And he continued that trend in front of thousands of exuberant children in a morning-start Kids Day game at Bridgeport on Wednesday. Martel’s league-leading 14th goal of the season in just 14 games extended his streak to six straight with a goal as Lehigh Valley was on its way to a 4-2 comeback road victory.

The wake-up call for the Phantoms was slightly belated as evidenced by a poor start and a 2-0 deficit but four straight unanswered goals for Phil Varone (3rd), Danick Martel (14th), Oskar Lindblom (3rd and Tyrell Goulbourne (2nd) turned the tables on the Sound Tigers. Alex Lyon notched a season-high 42 saves in a magnificent performance between the pipes. His 17 saves in the first period kept the Phantoms within striking distance for their second victorious omeback from a two-goal deficit this season. 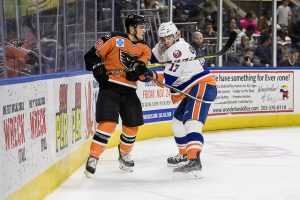 Martel’s 14 goals places him six ahead of Daniel Sprong of Wilkes-Barre/Scranton who is second in the league with eight. The third-year pro also took sole possession of the AHL lead in points with 19 by notching a goal and an assist in the game.

His six-game goal streak equals the longest for a Lehigh Valley skater initially accomplished by Petr Straka who had a six-game streak in November, 2015. The Phantoms franchise record is now just one away for Martel; Shawn McCosh in 1996-97 and Mike Maneluk in 1999-2000 both had seven-game goal streaks in the early years of the Philadelphia Phantoms.

The game was the opener of six straight on the road for the Phantoms which is their longest such stretch of the season. Lehigh Valley improved to 9-3-2 with the victory and stands at 2-0-0 against the Sound Tigers while Bridgeport had their three-game win streak come to an end as they fell to 6-6-0. The

The visiting Lehigh Valley Phantoms were still hitting the snooze alarm while the Bridgeport Sound Tigers had the “Early-Bird catches the Phantom” approach. Bridgeport was buzzing in the Phantoms zone for almost the entire period and dominated the shot-count to the tune of a 19-3 advantage at one point. Rookie defenseman Sebastian Aho blasted home his sixth of the season from the right point for a 1-0 lead. Later it was veteran Steve Bernier on a put back at the side of the net on the power-play to delight the thousands of youngsters screaming and hooting and hollering all game long.

Alex Lyon made one dazzling save after another in keeping the Phantoms competitive while the team in front of him was initially unable to find its stride. Lehigh Valley was perhaps fortunate to only be down by two at the opening intermission.

The second period was a different story and Lehigh Valley stormed out of the gates with a pair of goals just 51 seconds apart to tie the score at 2-2. Phil Varone connected in the slot for a put-back of a a T.J. Brennan shot at 1:04 to get the Phantoms on the board. Misha Vorobyev also assisted on the tally. 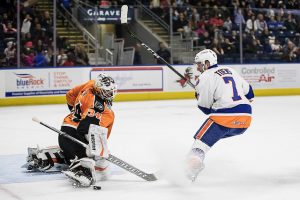 Mike Vecchione prevented the Sound Tigers from clearing the zone and then Nicolas Aube-Kubel connected across the ice for a wide open Martel who blasted through netminder Kristers Gudlevskis from the right dot on a powerful, rising laser-beam to the top corner over the goalie’s glove. And with those two goals in the opening two minutes of the second period the issues and sub-par play of the opening frame were in the rear-view mirror for the Phantoms who had quickly rallied to even the score.

Martel collected a T.J. Brennan shot behind the net and found Oskar Lindblom between the circles who powered home the tie-breaking goal at 13:45 into the second period. Lindblom’s third goal of the season was his first that he scored off his stick. The 20-year-old rookie from Sweden had two earlier goals this year that were deflections off his skate or leg.

In the meantime, Lyon was still heavily relied upon to come up with the big stops. With just a few seconds remaining in the second period he somehow sprawled to his left for a dazzling denial on former Adirondack Phantoms captain Ben Holmstrom to preserve the one goal advantage.

Bridgeport had a strong push in the opening minutes of the third period but Lyon stood tall again. The Sound Tigers out shot the Phantoms 16-6 in the final frame in their urgent comeback efforts but it was the Phantoms who would successfully find the back of the net. 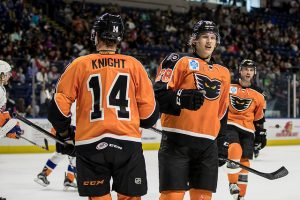 Goulbourne’s breakaway straight at Gudlevskis came on a nifty behind-the-back spin from the left boards by Phil Varone shortly after T.J. Brennan had cleared the zone while denying a Sound Tigers scoring chance. Goulbourne’s snipe to the blocker side was his second goal in the last four games. The Phantoms hung on from there to post their ninth win of the season.

Lehigh Valley finished 1-for-5 on the power play while Bridgeport was also 1-for-5. The Sound Tigers out shot the Phantoms 44-27.

The Phantoms road-swing continues Saturday night against the Hershey Bears with a 7:00 p.m. engagement at Giant Center in ChocolateTown.