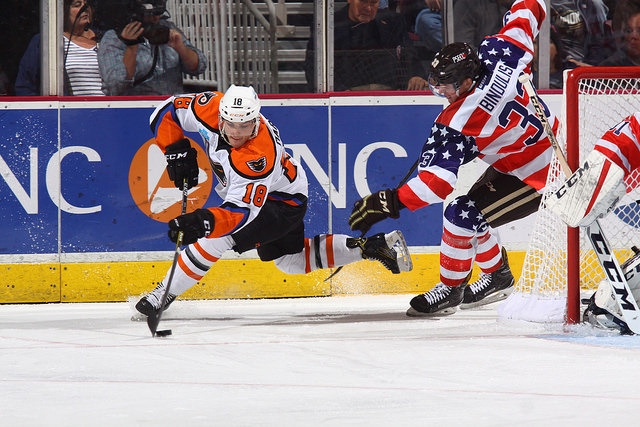 Hershey, PA – Danick Martel finally had a game without scoring a goal and the Hershey Bears ended their five-game winless home-streak against the Phantoms with a 6-1 decision on Saturday night at Giant Center.

Greg Carey (5th) broke Pheonix Copley’s shutout bit in the third period but that was all the offense for the Phantoms. The Phantoms moved to 1-1-0 in the opening week of their six-game road-trip. The regulation loss was just the fourth of the season for the Phantoms in their 15th game as the team’s record stands at 9-4-2. The Phantoms are 2-1-0 against Hershey this year as the Bears avenged earlier setbacks to Lehigh Valley from October 7th (7-2) and October 15th (4-3 in a shootout). 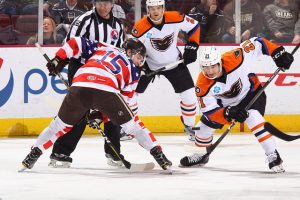 Danick Martel’s six-game goal streak came to a close as the AHL’s leading scorer did not light the lamp for the first time since October 25th. Martel’s streak is tied for the longest in Lehigh Valley history with Petr Straka who had a six-game streak in November, 2015. The Phantoms franchise record for longest goal streak remains at seven games held by both Shawn McCosh and Mike Maneluk.

Hershey stormed out of the gates early and Garrett Mitchell (3rd) lit the lamp driving into the net and contacting Alex Lyon who was knocked down in a simultaneous collision with teammate Phil Varone who had Hershey’s Liam O’Brien escorting him along.

The Phantoms almost answered shortly thereafter but T.J. Brennan’s high-slot rocket on the power-play rang squarely off the post and bounced away. 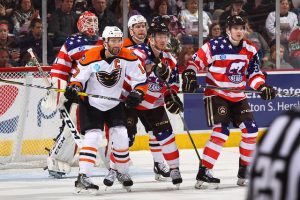 Matthias Bau converted on the first of his two power-play goals on the rebound of a Boyd shot from the left circle. The easy tap-in gave the Bears a 2-0 lead with under 2:30 left in the first.

The Bears built on their lead in the closing seconds of the period when Tyler Lewington’s point-shot escaped the clutches of goalie Alex Lyon and was knocked into the cage on a crease scramble. Hershey led 3-0 at the break and were out-shooting the Phantoms 16-3.

Lehigh Valley had their best push in the opening minutes of the second period and out shot Hershey 11-0 in the onslaught. But Copley had the answer every time including a breakaway denial on Chris Conner.

Shortly after Hershey withstood the Phantoms’ third power-play opportunity they Bears would rush into the zone with a 3-on-2 and Wayne Simpson scored from the slot for a 4-0 lead.

Riley Barber’s bar-down snipe in the slot at 4:09 into the third extended the advantage to 5-0 and then Bau capped the scoring with a backdoor conversion on the power play again. 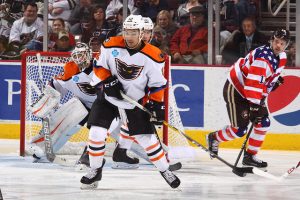 Greg Carey (5th) scored on the power play on a fine cross-ice feed by Phil Varone with 8:00 remaining to put the Phantoms on the board. Colin McDonald also assisted on the play.

Hershey out shot Lehigh Valley 33-25. The Bears were 2-for-3 on the power play while the Phantoms finished at 1-for-5. The two teams will next meet on Friday, December 1st at PPL Center.

The Phantoms travel north of the border for their next games on the road-trip with a Wednesday night engagement at the Belleville (Ontario) Senators and a Friday night trek to the Laval (Quebec) Rocket.