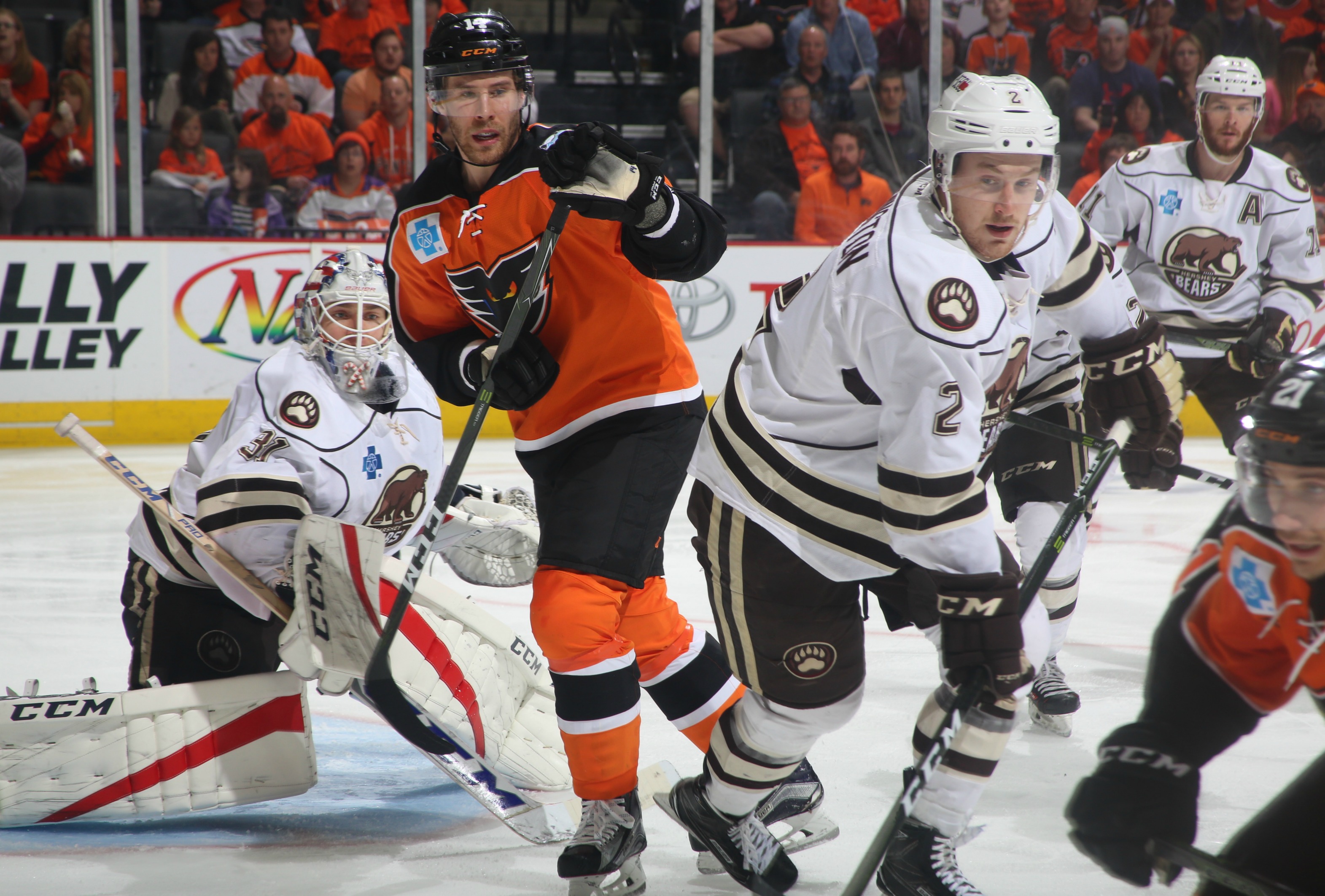 Lehigh Valley, PA – An incredibly memorable season for the Lehigh Valley Phantoms came to an end Sunday evening as the Phantoms skated to a 3-2 decision against the Hershey Bears in decisive Game 5 of their division semifinals series. With Sunday’s outcome, Hershey claimed the best-of-five series three games to two as, for just the second time in AHL Calder Cup Playoffs history, the road team won each and every game of the five-game series. 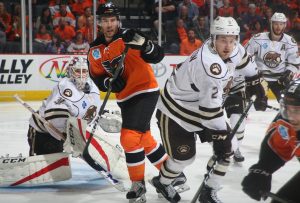 Sunday’s game capped an incredibly successful third campaign for the Phantoms in Lehigh Valley, which saw the team capture 48 wins and 101 standings points. Lehigh Valley’s 48 wins was good for second among all 30 AHL clubs during the regular season and marked the franchise’s highest win total since the 2004-05 campaign. Meanwhile, the Phantoms were one of just four AHL teams during the regular year to reach the 100-point mark as they posted their highest points total since the Calder Cup championship season of 2004-05 and the franchise’s sixth 100-point campaign in team history.

Lehigh Valley’s 48 wins and 101 standings points helped earn the team second place in the tightly-contested Atlantic Division as the Phantoms qualified for the Calder Cup Playoffs for the 11th time in franchise history. 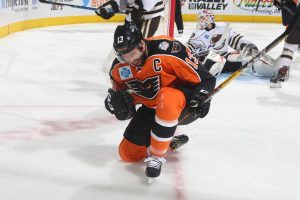 “The first goal this year was getting into the playoffs,” said Phantoms Head Coach Scott Gordon. “The organization hadn’t been in the playoffs in seven years and from day one that was our focus. Along the way, you put up 48 wins and 101 points and play in a division that really there weren’t a whole lot of easy nights and that really says a lot about how the guys played all year.”

Four of the five games in the division semifinals were decided by just a single goal with two of the contests having to be settled in overtime. Both the Phantoms and Bears each claimed an overtime tilt in the rivalry series while Lehigh Valley captured the only multi-goal triumph with a 4-1 victory in Game 4, which forced decisive Game 5 back at PPL Center on Sunday.

“I don’t think we can ask our players to play any better,” Gordon added. “We certainly gave ourselves a chance to win every single game and we didn’t get the bounces when we needed them. I can’t take anything away from our players. Our players played great. When it’s all said and done, I don’t know there’s that much we could possibly change. We generated chances, we defended well, we didn’t give up a lot.” 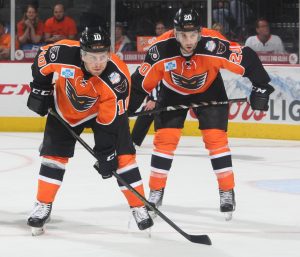 Hershey will go on to face the Providence Bruins in the division finals after the Bruins ousted the top-seeded Wilkes-Barre/Scranton Penguins with a 2-1 Game 5 win at Mohegan Sun Arena earlier in the day.

Veteran defenseman T.J. Brennan paced all Phantoms in scoring this season with 60 points – the highest single-season point total by any skater in the three-year history of the Lehigh Valley Phantoms. Brennan’s 60 points placed him in a tie for the top scoring spot among all AHL blueliners and was tied for eighth overall among all AHL skaters. His stellar campaign saw him pace all AHL defenders with 21 goals this season as he earned his third AHL First All-Star Team recognition of his decorated career.

Meanwhile, Greg Carey led all Phantoms with a career-high 28 goals this season. Carey’s 28 conversions was good for sixth among all AHL skaters during the regular year and marked the highest single-season goal total in Lehigh Valley Phantoms history. 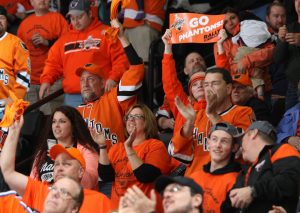 The 2016-17 campaign brought another season in which the Phantoms enjoyed tremendous support from their incredible fans as the team enjoyed 16 standing room-only sellouts inside PPL Center. For the third straight year, more than 300,000 fans poured into downtown Allentown to support the Phantoms while another 14,000 raucous fans filed into PPL Center during the postseason in creating some of the most energetic and intense excitement downtown Allentown has experienced since the team’s arrival.

Colin McDonald (2nd) and Taylor Leier (1st) provided the offense for the Phantoms on Sunday in support of goaltender Martin Ouellette who authored a strong 23-save performance.

Hershey opened the scoring just over five minutes into the first period when a second effort by Galiev at the side of the Lehigh Valley goal crease produced the dynamic winger’s third goal of the series. Tom Gilbert and Chandler Stephenson assisted on the even-strength strike tallied 5:32 into the opening frame. 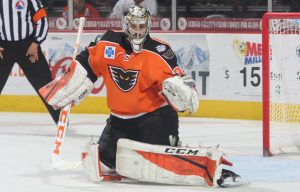 The Bears doubled their lead just past the midway point of the opening frame when a right point offering by Gilbert was altered en route by the shaft of Thomas’ stick before settling in the back of the Phantoms’ cage. Gilbert and Christian Djoos collected assists on Thomas’ first conversion of the postseason, which came 11:04 into the first period.

The Phantoms remained resilient though and sliced Hershey’s lead in half less than three minutes into the second period when, while on the power play, Travis Sanheim’s shot from the high slot kicked off the end boards to the side of the goal crease where McDonald won a battle for the loose puck before swatting home his second goal of the series. Sanheim and T.J. Brennan assisted on McDonald’s man-advantage marker punched in 2:40 into the middle stanza.

Hershey re-established its two-goal advantage just over six minutes into the third period when a perfect cross-crease pass from Nathan Walker connected with a slashing Williams down the right wing who promptly snapped home his first goal of the playoffs. Riley Barber garnered the secondary assist on the five-on-five conversion tallied 6:16 into the final frame of regulation.

The never-say-die Phantoms kept pressing though and trimmed the deficit to just a single goal with still better than seven minutes left in regulation when Leier darted down the left wing before chipping in his first goal of the series. Scott Laughton and Samuel Morin assisted on the even-strength strike tallied 12:50 into the third period.

Despite a late-game surge fitting of the resiliency displayed by the Phantoms all season long, that would prove to be as close as Lehigh Valley would get as the Bears escaped with the series win.