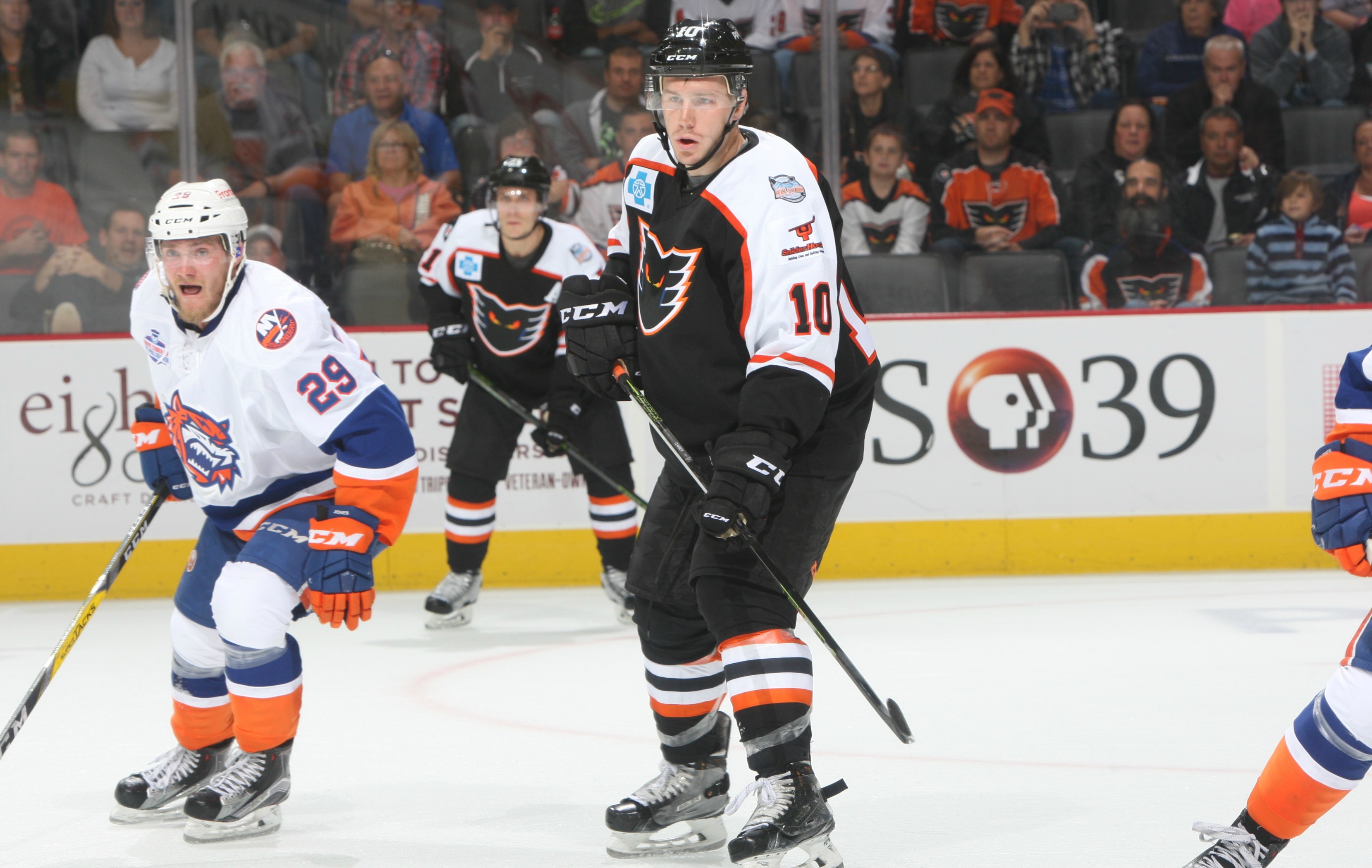 Lehigh Valley, PA – Colin McDonald and Greg Carey both converted their first goals of the season Friday evening as the Lehigh Valley Phantoms, proud AHL affiliate of the Philadelphia Flyers, paid tribute to the legacy of the late Ed Snider, the co-founder and former owner of the Flyers. Fans were treated to a moving video tribute of Snider while the Phantoms took the ice in specialty jerseys, which will be auctioned off online to benefit the Ed Snider Hockey Foundation. 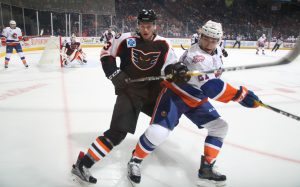 In the end, it was the visiting Bridgeport Sound Tigers, however, who captured the hard-fought affair with a 5-2 decision in front of 7,072 fans at PPL Center.

After leading the Springfield Falcons with 26 tallies last year, Carey landed his first with the Phantoms on Friday while Lehigh Valley’s captain, McDonald, converted his first of the new season after depositing 14 goals a season ago.

Reigning All-Star goaltender Anthony Stolarz made his second consecutive start between the pipes for the Phantoms netminder showcased his post-to-post athleticism throughout the evening in a 26-save performance.

Friday’s contest didn’t just include thrilling moments during play though as the evening also featured two Hometown Hero presentations, including a special edition in the third period honoring Sam Miele, the grandfather of Phantoms’ center Andy Miele. The moment stirred the PPL Center crowd to its feet as Andy presented his grandfather with a Phantoms jersey showcasing Andy’s number 21. 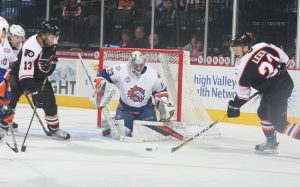 Carter Verhaeghe (goal, assist) and Bracken Kearns (2 assists) paced the offensive effort for the Sound Tigers while Christopher Gibson earned his second win of the season as he turned aside 18 of Lehigh Valley’s 20 total shots.

Neither side found the back of the net in the first period despite a combined 13 shots on goal. The Phantoms dominated puck possession in the opening frame and generated the better of the scoring chances in the game’s first 20 minutes thanks their blazing speed and offensive creativity. The goaltenders kept the rivalry tilt scoreless though as Stolarz turned aside the six Sound Tigers shots he faced in the first period while Gibson answer each of the Phantoms’ seven first-period offerings.

The Sound Tigers broke the scoreless dead lock early in the second period though when Kearns authored a cross-crease pass to Joshua Winquist who was able to convert his first goal of the season just inside the right post. Verhaeghe garnered the secondary assist on the even-strength strike notched just 47 seconds into the middle stanza. 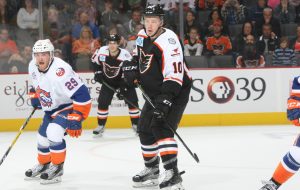 Bridgeport doubled its advantage with just over five minutes remaining in the period when, in the midst of a Lehigh Valley power play, Kellen Jones intercepted the Phantoms’ entry which kick started an odd-man rush that was capped off by a scorching one-timer from the right wing by Connor Jones for his first goal of the season. The shorthanded marker came 14:31 into the middle frame.

The Phantoms bounced right back though and sliced the Sound Tigers’ lead in half just over a minute later when a left wing shot by Jordan Weal produced a rebound at the top of the goal crease that was promptly swatted home by McDonald for his first goal of the young season. Travis Sanheim collected the secondary assist on the power play tally netted 15:37 into the second period.

The Sound Tigers stretched their lead to a 4-1 advantage less than a minute into the third period when Ross Johnston feathered a cross-crease pass to Colin Markison who made no mistake in snapping home his first goal of the season. The five-on-five tally came 42 seconds into the final frame in regulation.

But once again, the Phantoms wouldn’t back down. Just over six minutes into the third period, brilliant passing at neutral ice between Miele and Chris Conner generated a breakaway for Carey who made absolutely no mistake in converting his first goal of the season.

Bridgeport responded just over four minutes later though as Verhaeghe notched his first goal of the year from Kearns and Adam Pelech 10:24 into the final frame to seal the outcome.

The Phantoms are back in action at PPL Center on Saturday, October 22 when the Hartford Wolf Pack, the AHL affiliate of the New York Rangers, invade downtown Allentown. Saturday’s game will feature a post-game autograph session with Phantoms players so be sure to stick around after the game for a chance to meet your favorite Phantoms up close and personal. A limited number of tickets remain for Saturday’s rivalry showdown and can be purchased by clicking HERE.