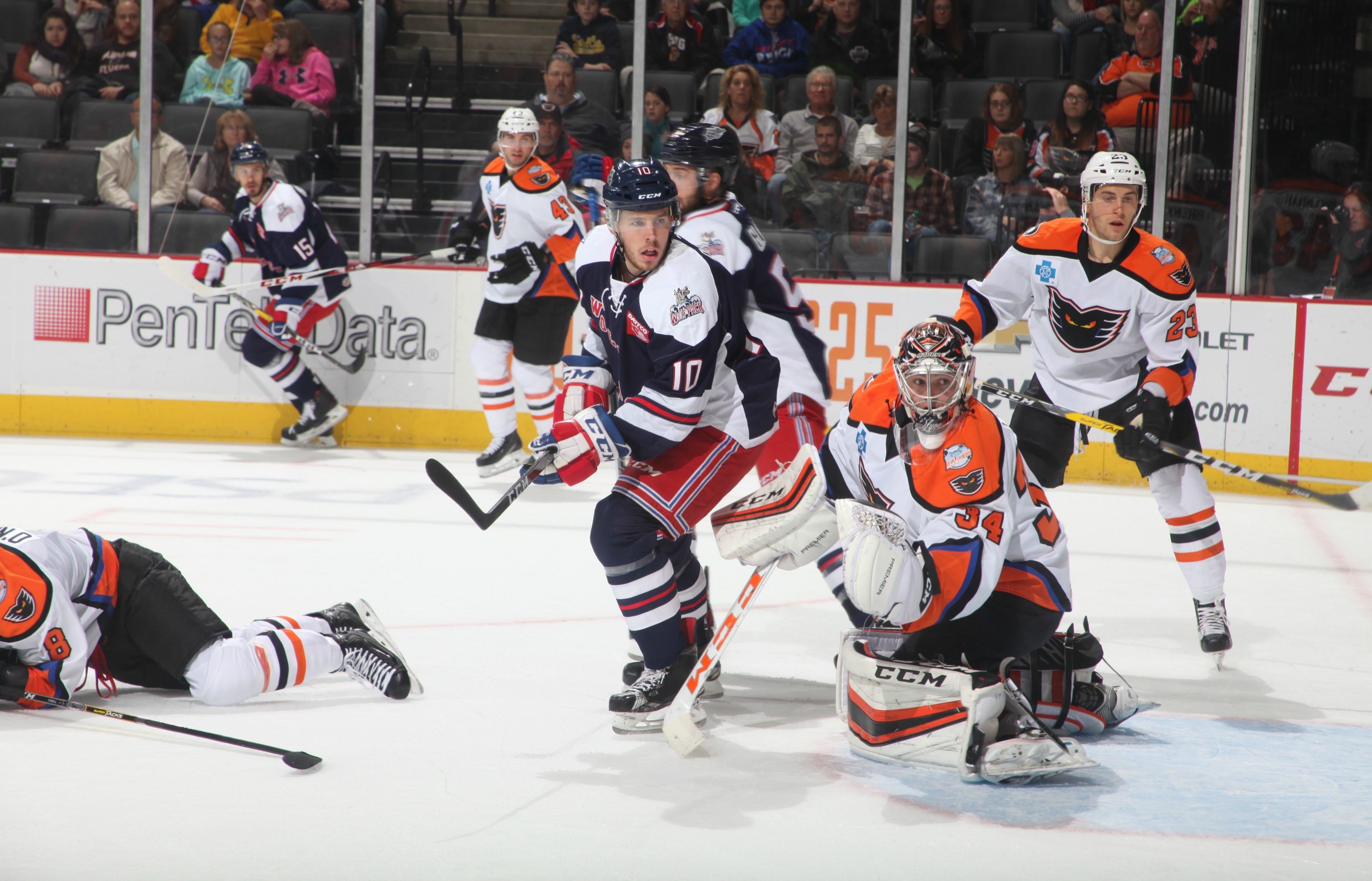 Lehigh Valley, PA – A frenetic third-period left the PPL Center fans breathless from the back-and-forth action as the Lehigh Valley Phantoms rallied from a pair of deficits to forge a regulation tie against the visiting Hartford Wolf Pack.

Games don’t get much wilder than the exciting engagement between the two Atlantic Division rivals in the Saturday Night Showdown. Trailing 3-1 entering the final frame, the hosts pushed forth with a dramatic comeback effort on goals by Andy Miele, Mark Zengerle and Chris Conner. Also scoring for the Phantoms earlier in the game was Corban Knight.

Alex Lyon performed capably in net in his professional debut turning aside 29 Wolf Pack drives in the overtime decision.

Tanner Glass scored a pair of goals for the visitors and Nicklas Jensen eventually converted in the three-on-three extra stanza. 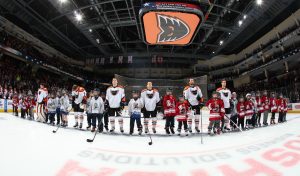 The decision almost went the Phantoms way in regulation. A crazy sequence late in the third saw the Phantoms hit the post twice in the closing minutes. Andy Miele was the first to find the iron with about four minutes to go. And just a few moments later Taylor Leier hit the base of the right-iron banking the puck across the crease and out. The goal-light actually came on for Leier’s offering but the referee deemed the close-call to be no goal and there was no video-review or coach’s challenge of the play.

Following the insanity, the fans were invited to stick around and meet the players in another one of the team’s terrific engagements with the fans. The Post-Game Autograph session proved to be a wonderful success yet again. 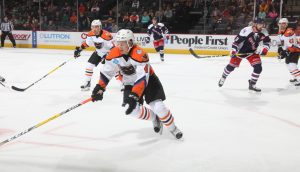 The game was the first of eight entanglements between the Phantoms and Wolf Pack this year and also marked the beginning of a busy stretch in which the two foes shall proceed to meet two more times within the next 11 days. Lehigh Valley travels to Hartford for a rematch on Friday night marking the commencement of five consecutive on the road for Scott Gordon’s contingent.

32-year-old NHL veteran Tanner Glass opened the scoring 3:57 into the game with his first of the season on a deflection of a blue-line slapper by Michael Paliotta.

Lehigh Valley equalized 7:51 into the second period with Corban Knight taking advantage of a Wolf Pack miscue and racing in for a shorthanded breakaway. The top-shelf snipe over the shoulder of big Magnus Hellburg was the first penalty-kill goal for the Phantoms this season.

A pair of consecutive penalties late in the second period allowed the Pack to regain momentum with John Gilmour and Justin Fontaine both scoring through screens. One of the goals may have been deflected off a Phantoms defensive stick as well. The back-to-back man-advantage strikes provided Hartford with a 3-1 margin after 40 minutes. 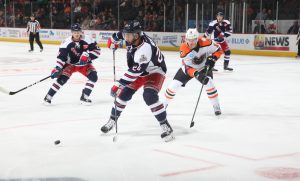 But the Phantoms donned their comeback hats for the third and got to work. Greg Carey chased down a puck in the corner with help from Colin McDonald on the forecheck and then quickly fired a strike to a cutting Andy Miele in the middle who was able to fire in his first goal in a Phantoms sweater. The even-strength strike at 5:05 into the third made it a one-goal margin again.

Shortly after that the continual Phantoms pressure eventually forced a penalty on Hartford to break up a Danick Martel drive to the net. On the subsequent power play, Lehigh Valley would eventually score with Mark Zengerle curling one home while being slammed down on the left of the slot after Taylor Leier had found him from the other side. The goal was technically not a power-play goal because the Hartford player had just stepped foot out of the box but it was clearly a result of the power-play set up the Phantoms had enjoyed.

The crowd erupted for the 3-3 deadlock at 8:03 into the third but it was just 93 seconds for the visitors to re-establish their own momentum with their first shots of the period. Ryan Graves bomb from the left point was kicked away off the right leg of Alex Lyon but Glass was there to pot the sharp-angle rebound thus forging a 4-3 advantage for the Baby Blue Shirts yet again. 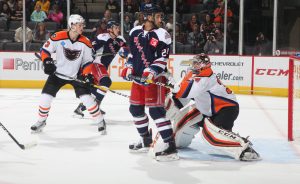 This time there would be just a 73-second gap between goals. Chris Conner at 10:59 into the third on the left of the cage received a wide wrap-around assist through the crease by Danick Martel. Typically it is Conner who is dishing out such helpers but this time he was on the receiving end of a terrific play that came just moments after the speedy Martel had almost scored on the breakaway.

Somehow the 4-4 deadlock would remain through the closing nine minutes of regulation despite multiple spectacular chances for both sides throwing all caution to the wind in the incredible sequence of odd-man rushes. Lehigh Valley hit two posts in those closing minutes but eventually it would be Nicklas Jensen to cut from the right-wall and roof a rising wrister past the glove of Lyon for the winner in the first overtime contest of the season for both sides.

Lehigh Valley’s record moves to 1-1-1 while the Hartford Wolf Pack now stand at 2-1. The Pack out shot the Phantoms 34-30. Hartford was 2-for-6 on the power play while Lehigh Valley officially finished at 0-for-5.

The Phantoms travel to Hartford for a Friday night rematch in what will be the first of five straight tilts as the visitors. The Lehigh Valley Phantoms return home on Saturday, November 5 to take on the Springfield Thunderbirds on 80’s Night. Tickets are available at PPLCenter.com or fans can click HERE.