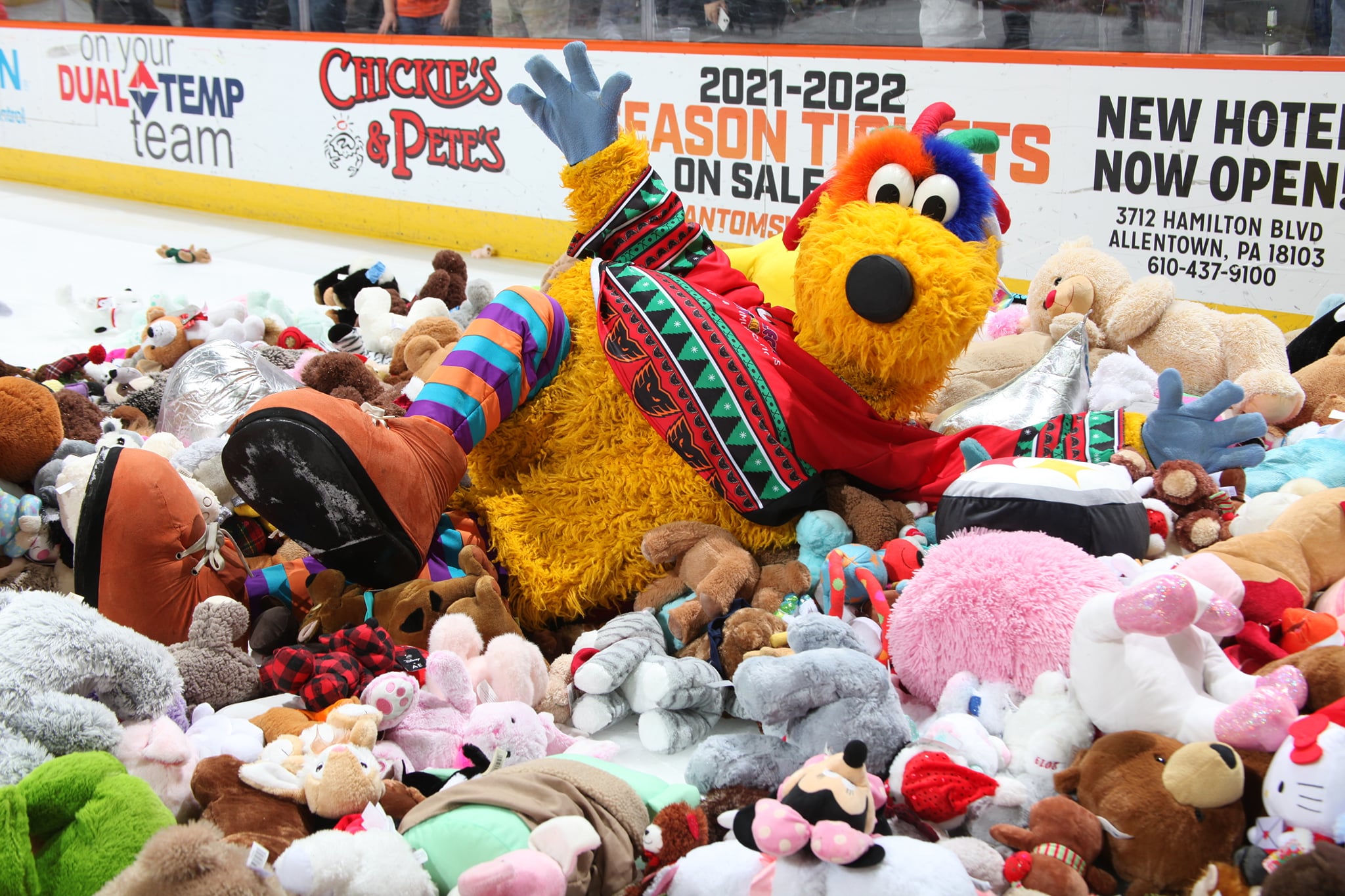 Phantoms Spook Away The Monsters 4-2

Lehigh Valley, PA – Gerry Mayhew scored with 10:59 remaining in the first period to bring thousands of stuffed animals raining onto the ice in the team’s seventh Teddy Bear Toss game and the Lehigh Valley Phantoms defeated the Cleveland Monster 4-2 on Saturday at PPL Center.

Egor Zamula scored a tying goal in the second period while Adam Clendening and Maksim Sushko scored back-to-back early in the third period in breaking a 2-2 tie.

Starting goalie Felix Sandstrom left the game after one period due to non-COVID related illness issues. Relief goaltender Pat Nagle was outstanding in his 40 minutes with 21 saves on 22 shots to engineer the victory. 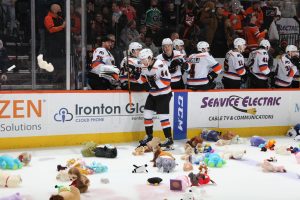 Cam York connected with a speeding Wade Allison rushing up ice on the power play. Allison was denied on the left side of the cage by goalie Daniil Tarasov but Mayhew was there on the other side to pot the rebound for his team-leading eighth goal of the season to spark the Teddy Bear Toss Mania at PPL Center!

Cole Clayton struck from center-point on the power play to even the score at 1-1 for Cleveland (10-8-5).

After Nagle entered the game to begin the second period he was tested early. A breakaway denial of Carson Meyer also resulted in the first penalty shot for an opponent this season. Nagle stuffed that as well to keep the game tied at 1-1.

Tyler Sikura converted down low a few minutes later to put Cleveland ahead 2-1.

Egor Zamula fired it home from center point on the power for his second of the season to forge a 2-2 tie.

Adam Clendening joined as a trailer on an odd-man rush with Matt Strome who also had Sushko in the middle. But Clendening was there to bury it against his former team to give the Phantoms a 3-2 lead. It was a well-placed by Strome dodging a couple sticks in picking up his second assist of the game. 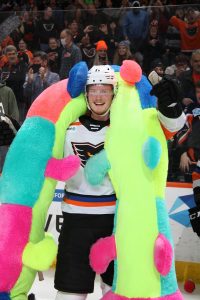 Just 75 seconds later it was Maksim Sushko intercepting a pass at center and taking the shot himself on a 2-on-1 to beat Tarasov for a 4-2 advantage.

Nagle was outstanding in his relief effort. Unexpectedly called into duty, the 34-year-old veteran netminder had just rejoined the Phantoms earlier in the week. Nagle has 198 career wins in the ECHL rating fifth all-time and first among active goalies. This was his first win with the Phantoms and his 17th all-time in the AHL, 16 of which have come in the last three years after he turned 32 years old.