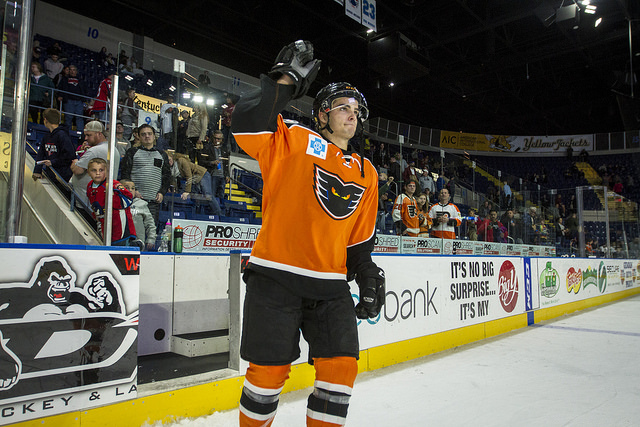 Springfield PA – Danick Martel continued with his torrid early-season scoring pace via two more goals leading the Lehigh Valley Phantoms to their sixth consecutive victory in a 5-2 decision at the Springfield Thunderbirds on Friday night. Martel’s eighth and ninth of the season propelled the rising star once again into sole possession of the AHL lead in lamplighters. 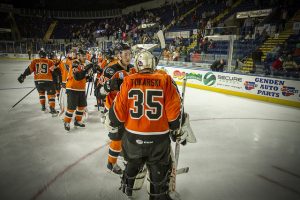 Oskar Lindblom, Cole Bardreau and Will O’Neill also scored goals for the Phantoms. For each it was their first of the season. Dustin Tokarski repelled 26 out of 28 Springfield drives to improve to 2-0-0 since joining Lehigh Valley a couple weeks ago.

Lindblom added an assist with his first goal of the year while Chris Conner tacked on a pair of helpers. Mike Vecchione notched an assist on the last Phantoms goal of the night to extend his point streak to six games.

The Phantoms swept the two-game home-and-home series from Springfield and improved to 7-1-1 overall. Lehigh Valley is tops in the AHL in wins and standings points (15).

Lehigh Valley broke through with three goals in the first period and then tacked on a couple more in the early minutes of the second to push their way through to a 5-1 lead. 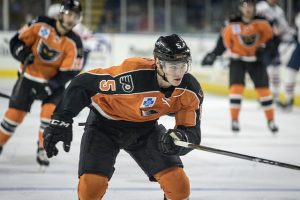 Danick Martel’s first of the night came on the power play just nine minutes into the game. Lindblom had initially found Conner for a point-blank chance that was blocked by the pad of goalie Samuel Montembeault. But Lindblom collected the puck behind the goal and spotted Martel on the opposite side who wasn’t quite able to pull the trigger on the forehand as he collected the pass. But wheeling around and shoveling a backhander while his back was turned to the net would work just as well. The elevated effort went over the left shoulder of the T-Birds netminder for the first strike of the night.

Just 55 seconds later it was Will O’Neill who would score from the left point through a Colin McDonald screen on the Springfield goalie. Mikhail Vorobyev and Radel Fazleev neatly played keep-away in the left corner and Vorobyev kept the play alive with his smooth hands before dishing to O’Neill behind him for the second goal of the game.

The Thunderbirds responded at 13:28 on a long drive from the top of the right circle following a crisp cross-ice pass from veteran Alexander Grenier. The shot to the far post just did sneak through the blocker side of Tokarski to cut the Phantoms margin in half to 2-1.

And a few minutes later it appeared to be on the table for Springfield to capitalize with an equalizer when they went on the power play. But a save off Tokarski was quickly gunned down ice by Reece Willcox up the left boards allowing Cole Bardreau to show off his speed and race past the the Springfield rear-guards on their power play. Bardreau made it look easy winning the race to the puck and he converted on the breakaway for his first of the year in just his second game of the season since joining the team following an injury in the Flyers preseason training camp. 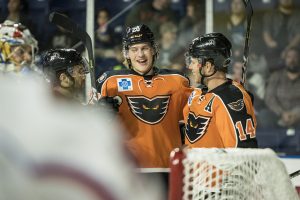 The Cornell Connection of Willcox to Bardreau had combined to put the Phantoms ahead at 3-1 with 1:29 remaining in the first period.

It was just a few seconds into the second for the visitors to pounce again. Philippe Myers held the puck away from a Springfield pursuer in his zone and then connected with Chris Conner through the center circle who offered a deep puck angled into the right corner. Corban Knight was the first one there to track down the roller and his quick centering pass was perfectly timed for a Lindblom conversion as the young Swedish talent was crashing the net. It was just 15 ticks into the middle stanza for the Phantoms to extend their advantage to 4-1. A quick review on the video replay to determine if there was any distinct kicking motion upheld the original ruling on the ice that Lindblom’s first goal of the season was indeed a good one.

Mark Alt almost extended the lead a few minutes later but his drive from the point which was potentially deflected then clanked off the left iron and bounced away.

Martel found the puck in his own zone and started a breakout before speeding up to join the rush into the Springfield end. Vecchione at center led Aube-Kubel across the blueline who then smartly dished to his left for the onrushing Martel who blasted through the new Thunderbirds goalie Harri Sateri for his second of the game and league-leading ninth of the year. More importantly, the Phantoms enjoyed a 5-1 lead before the midway point of the contest. 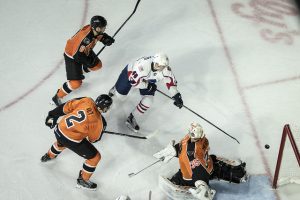 Juho Lammikko got one of them back for Springfield with a power-play marker before the second period concluded and then the teams traded chances throughout a run-and-gun third period that ultimately did not tield any offensive results. Aube-Kubel hit the cross-bar on a bullet in the opening minutes of the third. And Martel was one-on-one with a defender late in the game with a chance to record a franchise-record fourth hat trick but he wasn’t able to pull off the feat this time around.

The Phantoms were 1-for-4 on the power play while Springfield finished at 1-for-5. The Thunderbirds out shot Lehigh Valley 28-27.

Lehigh Valley returns to PPL Center on Saturday, October 28 when it hosts the Hartford Wolf Pack, AHL affiliate of the New York Rangers, for the first time this season. Saturday’s game features a Post-Game Autograph Session with Phantoms Players where fans are encouraged to stick around after the game to snag an autograph from some of their favorite Phantoms. Only a limited number of tickets remain for Saturday’s game and can be purchased online by clicking HERE.