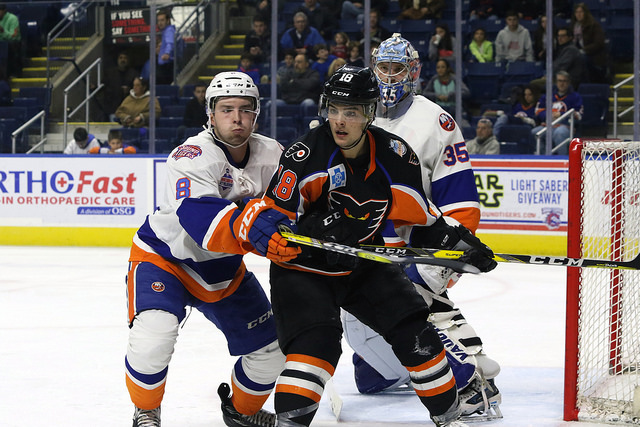 Bridgeport, CT – Danick Martel snapped home a tie-breaking strike with 12:20 remaining in regulation that eventually held up as the game-winner for the Phantoms who prevailed 3-2 at Bridgeport in a hard-fought Sunday matinee. With the win, Lehigh Valley leapfrogs ahead of the Sound Tigers in the ultra-strong Atlantic Division standings and moves into a deadlock with first-place Wilkes-Barre/Scranton for the most total standings points in the AHL with 31.

Taylor Leier (6th) and Colin McDonald (11th) also socked home tallies for the Phantoms. McDonald’s goal represented his third lamplighter in the last four games and also moved the team’s captain into a tie for the AHL lead in goals. 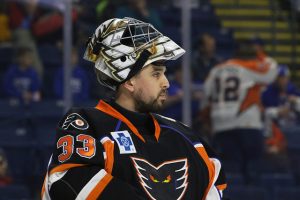 Martin Ouellette turned aside 19 of 21 Bridgeport drives for the win in his first Phantoms start of the season after playing in seven games with Reading in the ECHL this year. The third-year-pro was playing in his 18th career Phantoms game and had a carry-over shutout streak from last season; Ouellette’s final two starts of 2015-16 were 4-0 shutout wins at St. John’s on April 2 and at Wilkes-Barre on April 8. He finally allowed a goal at 10:17 into the second period to conclude his carry-over shutout streak from the season before at 155:37.

The Phantoms won their second straight on the road as well their third in their last four overall to improve to 15-6-1 (31 points) overall. Lehigh Valley has won its last four straight road contests dating back to their last setback which was at Bridgeport on November 19. The Phantoms are 10-3 overall away from PPL Center.

Lehigh Valley also recorded a win against the only team to have enjoyed consistent success against them this season. The Phantoms entered the game with an 0-3 record against Bridgeport while racking up a 13-3-1 mark against the rest of the league. But Lehigh Valley never trailed in the fourth matchup against the lone squad that has had its number.

The Phantoms raced out to a 2-0 lead in the first period on goals by Leier and McDonald while dominating the opening 20 minutes of play with a 14-3 shots advantage. 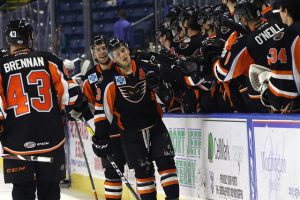 Corban Knight’s intercept and long stretch pass connected with Leier in stride and sprung the third-year winger on a clean breakaway from the blueline. Leier converted low blocker on Sound Tigers goaltender Stephon Williams for the 1-0 lead and then was rewarded for his efforts with a hard slam throwing him into the corner by chasing defenseman Devon Toews. Leier, now sporting a noticeable shiner around his eye from an errant stick that got him late in Saturday’s game at Hershey, shook off the violent collision to join his teammates in celebration of the 1-0 lead.

Knight would set up the next goal as well at 12:07 but this time it was from behind the Bridgeport net finding the cutting Colin McDonald racing into the slot who met the timing play with a powerful blast through Williams for a 2-0 lead.

Bridgeport would surge back in the second and begin to put the Phantoms on their collective heels a bit. A pair of goals just 51 seconds apart would pull the Sound Tigers right back into the game and also represented their only tallies of the evening. 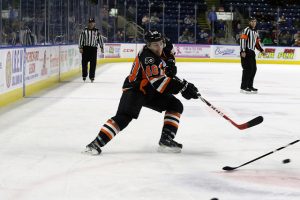 Travis St. Denis capped a monster four-goal weekend with a backhander in the slot after a right-pad save by Ouellette on Scott Mayfield. St. Denis had yet to score at the professional level before his four-goal explosion in the last three games and this one put Bridgeport on the board at 10:17 into the middle period.

Less than a minute later it was 35-year-old Bracken Kearns with a chip from the slot on the power play for his eighth of the season and suddenly the game was back to square one with the score once again even.

Martel’s winner at 7:40 into the third period came on a fine entry by a cutting Robert Hagg who had rotated up to the left circle. Drawing a defender over to his side left Martel more open in the slot to drive through the game-winner. Jordan Weal also assisted on the play for his team-leading 24th point. Weal did not score a goal for the first time in four games but has scored 3-4-7 in his last four and also has 5-4-9 in his last six contests.

The Phantoms had an opportunity to deliver a knockout punch on a power play opportunity with just 5:01 remaining but were unable to cash in. It was the first time in four games the Phantoms failed to produce a power-play goal. Lehigh Valley had two power play strikes in each of the previous three contests going a combined 6-for-20 but this game at Bridgeport the Phantoms finished at 0-for-4. 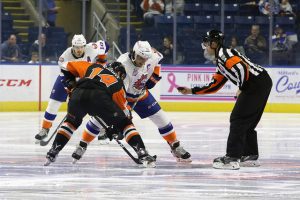 Bridgeport had a late chance of their own with a penalty and a pulled goalie with seven seconds remaining affording the Sound Tigers a 6-on-4 advantage in their last-gasp efforts. But the big blast from hard-shooting Ryan Pulock at the point was deflected wide by veteran Stephen Gionta as time expired.

The Phantoms out shot Bridgeport 28-21. Lehigh Valley was 0-for-4 on the power play while Bridgeport finished at 1-for-6.

The Phantoms are then back in action at PPL Center for a pair of games next weekend against the Rochester Americans to open a six-game homestand, the team’s longest of the season. Friday, December 9 is Youth Winter Hat Night courtesy of PPL for the first 2,500 kids 14 and under. Saturday, December 10, it’s the annual Teddy Bear Toss presented by Dan’s Camera City where fans are encouraged to bring new or gently used teddy bears and stuffed animals to the game and throw them onto the ice when the Phantoms score their first goal. All bears/stuffed animals will then be donated to Valley Youth House to be distributed to children across the Lehigh Valley. A limited number of tickets remain for both Friday and Saturday’s games and can be purchased online HERE. 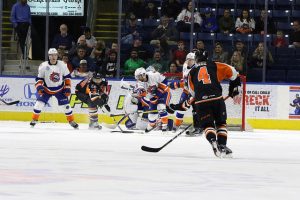