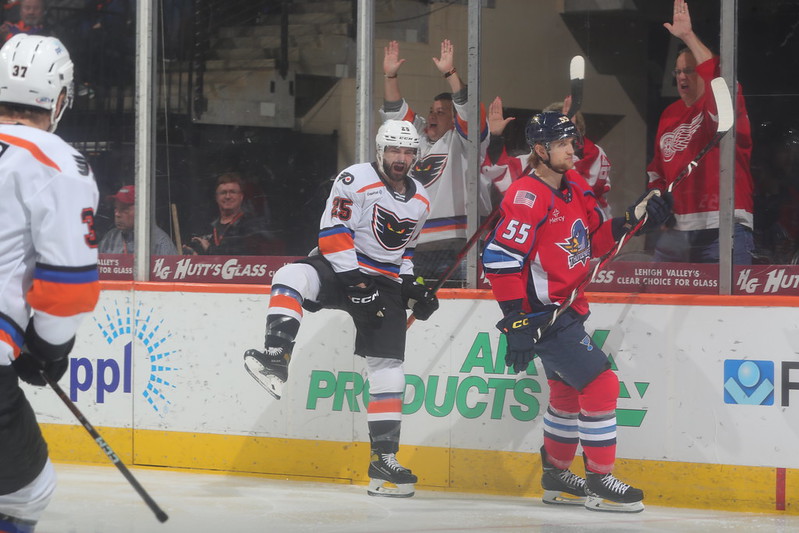 Lehigh Valley, PA – Cooper Marody’s first game in Allentown was a memorable one. He scored a goal on his first-ever shift at PPL Center and later had a nifty backhand assist on Louie Belpedio’s game-winner in the third period to lead the Phantoms to a hard-fought 2-1 win over the Springfield Thunderbirds on Friday night at PPL Center.

It was a fight all the way to the finish. Lehigh Valley (4-5-1) successfully killed off two minutes of six-on-
five extra attacker time by Springfield (5-5-2) in a stretch that included key blocks by Max Willman and Zayde Wisdom to grind out the win. Sam Ersson (21 saves) recorded his second victory in a row.

The return to PPL Center for the Phantoms’ first home game in two weeks was also the return of the WFMZ-69 Phantoms Coat Drive. Fans contributed over 1,100 new and gently used coats to benefit homeless veterans courtesy of the Victory House as well as Salvation Army programs. 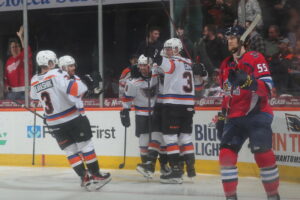 Marody had not played since the season opener on October 15 at Wilkes-Barre/Scranton and had also been sidelined before that through the Philadelphia Flyers’ training camp with an injury. But he showed he was ready to return right from his first shift when he got to a rebound in the crease of an Adam Ginning backhander to give the Phantoms the early 1-0 lead just 1:57 into the game. Cal O’Reilly also received an assist on the Phantoms’ fastest goal of the season. It was the Captain’s 539th career helper, eighth-most all-time in the American Hockey League.

But Springfield was coming hard and had the Phantoms on their heels for much of the first period. Sam Ersson made 12 strong denials in the opening frame including a beauty with his right toe after a rebound on a breakaway chance by Matthew Highmore and Drew Callin.

Lehigh Valley was much stronger in an exciting second period which opened with a fight between Garrett Wilson and Luke Witkowski. Breathless action and big saves on both ends of the ice kept the PPL Center fans on the edge of their seats to begin the period with Sam Ersson and Joel Hofer making some of their best stops of the evening.  Lehigh Valley outshot Springfield 10-4 in a solid second period effort and maintained their slim 1-0 advantage.

The Thunderbirds came out hard to open the third and equalized in the opening minutes on the eighth goal of the campaign for Nathan Todd who got a friendly bounce off the end boards. His bank off Ersson tied the game at 1-1. It appeared Ersson may have kicked the puck into the net by accident on the initial shot by Luke Witkowski from center-point but the goal went for Todd.

Marody had developed several other strong chances after his game-opening goal and made another solid connection for the eventual game-winner. His nifty backander from the left boards and through traffic connected with a cutting Louie Belpedio who dangled through the defense to stuff a backhander between the pads of Hofer for a 2-1 lead with 14:19 remaining. Cam York received a secondary assist on the play for his seventh point of the season to move into a tie for the team lead with Tyson Foerster. 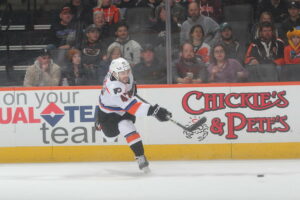 Springfield pulled Hofer with over two minutes for a 6-on-5 attack but could not find the equalizer. Willman and Wisdom were among those making big blocks down the stretch. Wisdom’s play came with just 10 seconds left to essentially seal it for Lehigh Valley.

The relatively clean game also saw the Phantoms’ streak of four consecutive contests with a power-play goal come to an end. Both teams went just 0-for-1 on the power play. Lehigh Valley outshot Springfield 26-22 and the team has outshot their opponents four times in the last five games

The Phantoms conclude their homestand Saturday for a rematch of last week’s 3-2 overtime thriller against Laval. It’s 90’s Night as well as Scout Night for the 7:05 puck drop at the PPL Center.