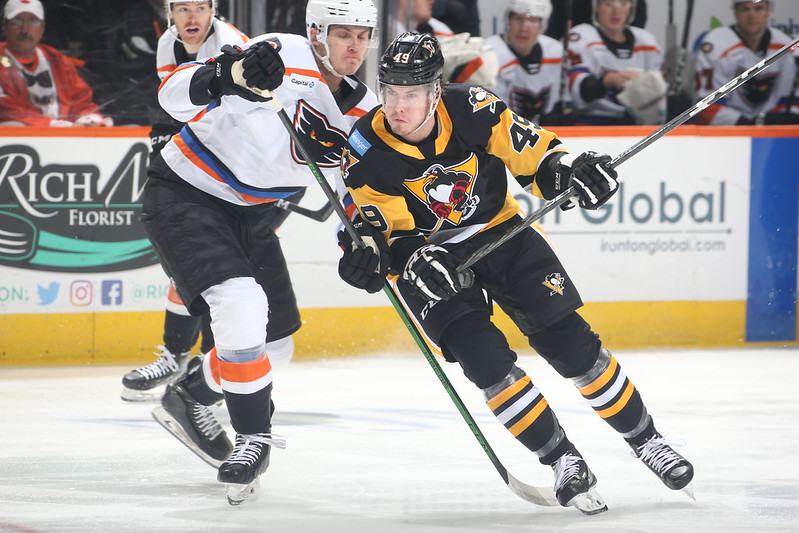 Lehigh Valley, PA – Cooper Marody (5th) drew the Lehigh Valley Phantoms even in the first period, but the Wilkes-Barre/Scranton Penguins scored a 4-1 win over the Orange and Black on Saturday night at PPL Center. Garrett Wilson earned an assist in his return to the lineup following a two-week absence with a lower-body injury. Pat Nagle made 31 saves for the Phantoms.

Both teams hit pay-dirt on the man-advantage, as Lehigh Valley (14-13-3) finished the night 1-for-4 to Wilkes-Barre/Scranton’s (14-9-5) 1-for-4 effort. Before special teams later dominated the opening frame, Sam Houde scored even-strength for the Pens only 4:25 into the New Year’s Eve showdown. Following a crafty offensive zone entry for Wilkes-Barre/Scranton, Houde redirected a shot from Filip Hallander in the low-slot for his fifth tally of the season.

Cooper Marody brought the Phantoms even with a power-play goal at the 8:00 mark. After Tyson Foerster’s blast from the left point off the pads of Taylor Gauthier sent everyone scrambling, Marody cleaned up a juicy rebound for his fourth goal in his last four home games at PPL Center. Artem Anisimov and Garrett Wilson both recorded the assists with touches down low on the scramble.

Before the stanza expired, the Penguins recaptured a one-goal lead on a power-play goal of their own. Valtteri Puustinen banged home his 12th marker of the season following a lively carom off the end boards. Alexander Nylander and Mitch Reinke earned the power play helpers at 14:31. Shots after 20 minutes were 9-6 Penguins.

Wilkes-Barre/Scranton netminder Taylor Gauthier recorded his first career American Hockey League win in his debut, and a highlight reel stop midway through regulation tilted momentum in his club’s favor. Gauthier led his team’s penalty kill with a 3-for-3 effort in the second period alone, including a series of acrobatic saves on Max Willman.

Soon after a Pens’ goal line stand, Drake Caggiula added an insurance marker at 12:44 to provide Wilkes-Barre/Scranton a 3-1 lead after 40 minutes. Corey Andonovski finished the scoring with an empty-netter with 4:22 remaining.

The Phantoms will open 2023 with a three-game road-trip beginning on Friday, January 6 at the Rochester Americans. The next home games are Friday, January 13 and Saturday, Janaury 14 against the Bridgeport Islanders and Syracuse Crunch