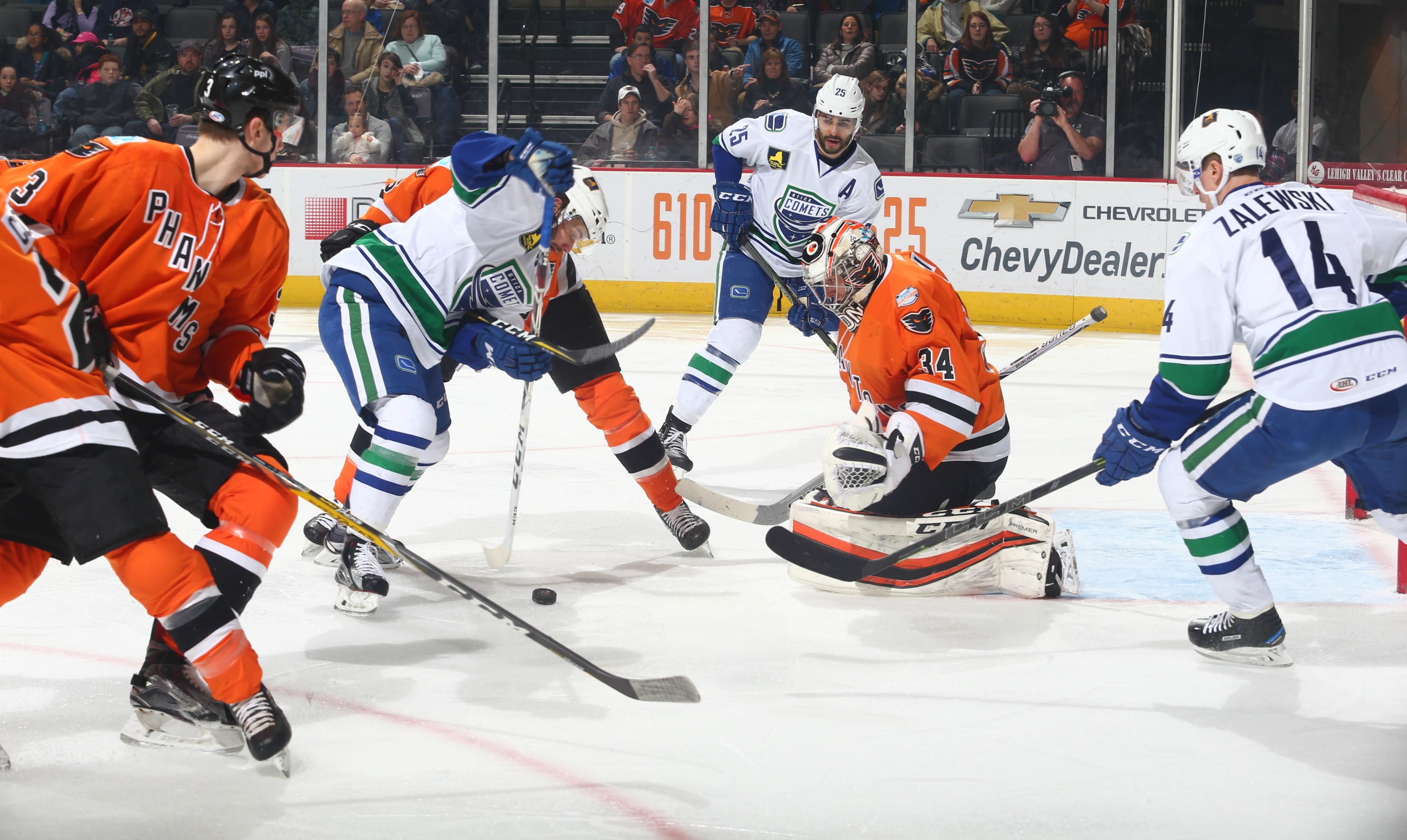 Lehigh Valley, PA – Alex Lyon backstopped the Lehigh Valley Phantoms to their third victory in a row and fifth in their last six in a 4-1 decision over the Utica Comets in front of yet another sellout crowd at PPL Center on Saturday night. Colin McDonald (22nd), T.J. Brennan (18th), Nicolas Aube-Kubel (8th) and Travis Sanheim (10th) all scored for Lehigh Valley.

The Phantoms 39th win comes with still 16 games remaining in the regular season. The team has a chance to become the first in franchise history to record 50 wins in a season. The Philadelphia Phantoms in 1996-97 recorded a franchise-record 49 triumphs in the squad’s inaugural season at Spectrum. 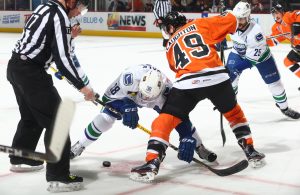 The Phantoms maintained their four-point gap behind the first-place Wilkes-Barre/Scranton Penguins and still hold one game-in-hand while also anxiously awaiting the upcoming six head-to-head tilts between the two rivals in the culminating four weeks of the regular season. Utica had entered the game red-hot with a six game win streak and eight-game point streak. The Comets had not lost a regulation decision since the Phantoms last played in Utica on February 19 in a 7-4 verdict.

Another sellout crowd of 8,681 fans jammed into PPL Center at the corner of Seventh and Hamilton representing the Phantoms 14th standing-room only crowd of the season and their 60th Phantoms regular-season sellout contingent since the initial opening of the dazzling new facility less just two seasons earlier.

After the game, the fans were allowed onto the ice for a post-game open skate with the Phantoms players to mingle and talk hockey while also accepting hundreds of photos and autographs along the way. It was another great fan interaction opportunity with the the team’s players to delight kids and adults alike celebrating an exciting W. 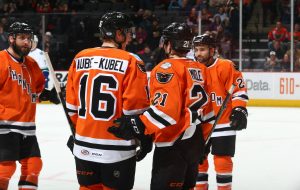 Lyon is on a roll. The rookie goaltender out of Yale University recorded a 31-save shutout at Wilkes-Barre/Scranton on Wednesday representing his fourth clean sheet of the season. He was very close to making it back-to-back shutouts in his next start on this Saturday occasion against Utica when Cody Kunyk jammed through a faceoff win with just 6:44 remaining on the Comets’ 37th shot of the game. Lyon’s 24th win of the season keeps him in a tie for second-most in the AHL with Tristan Jarry of Wilkes-Barre/Scranton.

Lehigh Valley streaked out to a 1-0 lead on the first shot of the game when Scott Laughton offered a spinorama pass from the bottom of the left circle that perfectly connected with Colin McDonald on the backdoor who slammed home the game’s opening strike while some fans were still settling into their seats. Cole Bardreau also received a secondary assist on the play with the Phantoms taking the initial advantage just 41 seconds after opening puck-drop.

Brennan’s goal represented his team-leading 50th point of the season. He becomes the fourth player ever for Lehigh Valley to reach the 50-point mark joining Nick Cousins and Jason Akeson in 2014-15 and Chris Conner in 2015-16.

After that it was Alex Lyon stealing the show repeatedly as he faced an 18-shot barrage in just the first period alone from the hard-charging Utica Comets. On one exchange, Lyon tumbled over and was practically on all fours facing towards the corner when he appeared to knock away a close-range offering with his RIGHT hand that usually holds his stick. He fell to his belly and successfully stopped another shot with his leg. And somehow after all of that, Lyon had kept the Comets out of the net.

T.J. Brennan doubled the Phantoms lead to 2-0 at 9:34 into the first on the back-end of a double-minor power-play. His one timer from the right circle powered top-shelf past Comets netminder Michael Garteig would go for his 18th goal of the season, five of which have come against Utica. Brennan’s most recent goals had been at Utica on February 19 when he recorded his third career hat trick.

The shot barrage continued for the Comets with a variety of drives coming on the rush, others from outside, and others from in close. No matter. Lyon stopped them all for Scott Gordon’s gang.

“A win’s a win. You don’t want to criticize a win too much,” said head coach Scott Gordon. “But there’s definitely a certain level of play that we had Wednesday and Friday vs. what he had tonight. As long as we come from the game knowing that there’s a better level of play that we’re capable of it’s not a big deal. I think that’s got to be the takeaway.”

Lehigh Valley finally pushed back past the midway point of the middle frame with a few opportunities of their own. Miele carried behind the net and created a wrap-around chance of sorts when he found Aube-Kubel rushing to the left hash. The conversion from the speedy rookie winger at 12:16 of the second pushed the Phantoms advantage to 3-0 and was the deflating moment for the previously energetic Comets squad. Miele’s helper represented his second of the game.

Utica was outshooting the Phantoms by a 30-13 margin at that point yet found themselves down 3-0 as Lehigh Valley made the most of their limited chances while the Comets remained stymied by the solid goaltending of Lyon.

“I think the two games before this we had really good games,” Miele said. “You’re bound to have games like this. That’s when it’s important for goalies to take over the game and our goalies have been doing that for us lately. That gives us a lot of confidence to do our thing up front.” 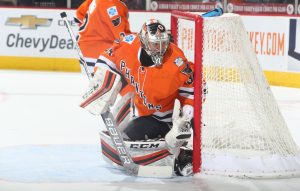 A faceoff win late in the third prevented Lyon from his second consecutive shutout when Cody Kunyk jammed home his 12th of the season putting the Comets on the board.

Travis Sanheim reached double-digits in goals with his long range empty-netter from behind his own blue-line to conclude the scoring with five seconds left. Immediately after the goal Sam Morin dropped the gloves with Utica’s Darren Archibald in their last opportunity to settle whatever score they had while also providing even more entertainment and excitement for the exuberant and appreciative Phantoms Phaithful.

The Phantoms are 2-0 on their four-game homestand and improved to 17-2-1 against the North Division. Lehigh Valley is 24-0-0 when leading after two periods and are the only team in the AHL with a completely unblemished record in such situations. The Phantoms reached the four goal mark for the 32nd time this season and are 29-2-1 when scoring four or or more. Lehigh Valley at 3.65 goals per game is the highest scoring offense in the American Hockey League.

The Phantoms were out shot by Utica 37-27. Lehigh Valley was 1-for-5 on the power play while the Comets finished at 0-for-3.

The homestand continues with back-to-back games against the division leaders. The Syracuse Crunch are tops in the North and will invade PPL Center on Wednesday evening. Then it’s the Wilkes-Barre/Scranton Penguins arriving on Friday and currently holding a precarious four-point advantage over the resilient Phantoms in the hotly contested Atlantic Division race. The Phantoms will don St. Patrick’s Day themed green jerseys as part of the team’s Celtic Celebration Night. A limited number of tickets remain for the team’s upcoming games on the homestand and can be purchased by clicking HERE.