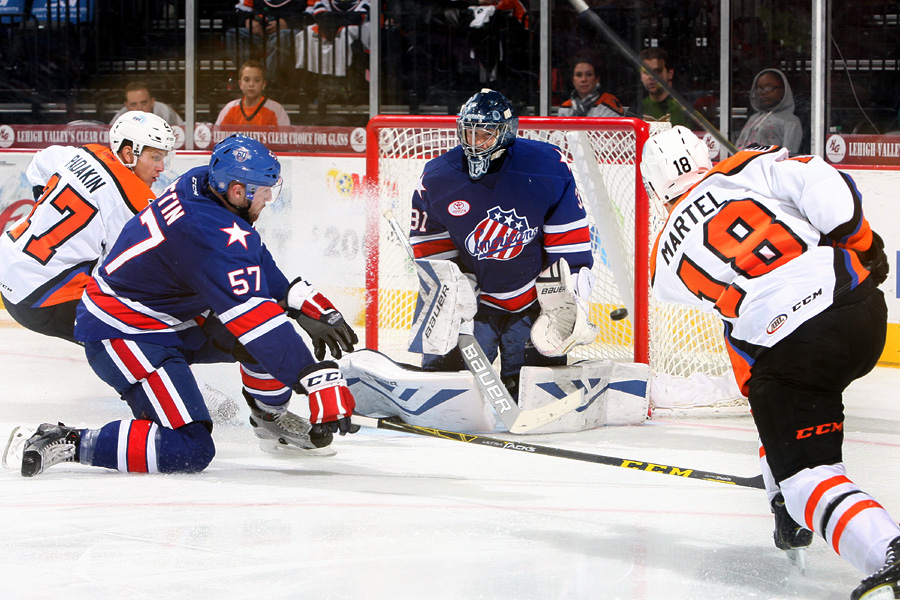 Lehigh Valley, PA – The Lehigh Valley Phantoms began the scoring early and didn’t let up until the very end in a 7-1 annihilation of the visiting Rochester Americans on Friday night at PPL Center. The Phantoms reached their highest offensive output since moving to the Lehigh Valley.

Similar to Wednesday’s 6-3 win at the Binghamton Senators, Friday night featured a balanced attack with six different goal scorers. Danick Martel (4, 5) found his form again with a pair of strikes while Chris Conner (5), Kevin Sundher (1), Taylor Leier (4), Nick Cousins (5) and Petr Straka (8) all found the back of the net as well. 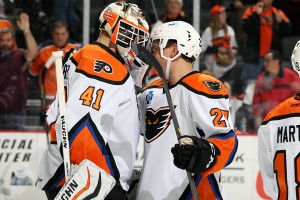 Not to be out-done, Anthony Stolarz was stellar between the pipes with 33 saves on 34 shots in earning #2 Star of the Game honors behind only the rookie Martel. Phantoms head coach Scott Gordon has been especially pleased with the young talent’s abilities.

“Yea he’s a guy that plays with a lot of energy and speed,” Gordon said. “He competes
every shift. He had that injury earlier in the year and it took him two or three games to get to where he is now. The last few games he has picked up his game to where we thought it would be after training camp.”

For Nick Cousins, the recent goals are especially satisfying after spending the last 12 days on the sideline following an injury on October 30 against St. John’s. Cousins scored in his return to the lineup at Binghamton on Wednesday and then made it a two-game goal streak with his quick blast on Friday while trying a surprisingly unique method of attempting to score which apparently is effective for the third-year pro.

“I was coming out of the corner and (Chris) Conner made a nice play,” Cousins said. “I saw that I had a little room so I closed my eyes, shot it and I was fortunate enough to have it go in.

Cousins finished with one goal and two assists for the game.

The offensive output actually could have been even higher believe it or not. Kevin Goumas almost scored on a breakaway in the second period as he was hauled down. He was offered the first-ever penalty shot at PPL Center but was denied on the goaltender’s blocker-side. Nick Cousins still has the lone penalty-shot goal in Lehigh Valley history with his hat-trick clinching strike on the road at the Toronto Marlies last March. 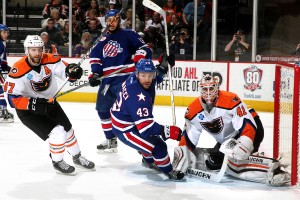 Tim Brent assisted on the team’s second goal to extend his point-streak to six consecutive games.

Rookie defenseman Christian Marti handcuffed Rochester goalie Nathan Lieuwen with a right-wing shot that was deposited easily on the backdoor by Martel for the 2-0 lead. That assist officially marked the young Swiss blueliner’s first career point.

Lieuwen had a tough night for the Americans and went the distance in the game surrendering all seven goals.

The game also marked the return of Jason Akeson. One of the franchise’s all-time leading scorers with 225 career points placing him fourth, Akeson was not as noticeable throughout the blowout contest. He had a couple quality opportunities at net by Stolarz was able to repel his former teammate on both occasions.

The last time the Phantoms franchise scored six or more in consecutive games came at the very beginning of the 2011-12 season when the Adirondack Phantoms defeated the Connecticut Whale (now the Hartford Wolf Pack) and Bridgeport Sound Tigers by identical 6-3 scores on October 8 and October 14.

The last time the Phantoms franchise scored seven (or more) goals in a game was April 1, 2011 when the Adirondack Phantoms defeated the Albany Devils by a 9-5 count which also equaled the most goals in a game in the history of the team originally established by the Philadelphia Phantoms in their inaugural season 1996-97. 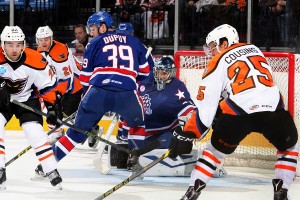 The game marked the lone Allentown appearance for the Buffalo Sabres affiliation this season. Lehigh Valley will travel to Rochester for a rematch encounter much later in the season with their March visitation.

The Phantoms conclude their weekend homestand on Saturday evening against the Albany Devilsfor their lone sojourn to PPL Center of the 2015-16 campaign.

Limited seats are remaining for the team’s last home game in two weeks are available at PPLCenter.com or by calling 610-347-TIXX (8499). 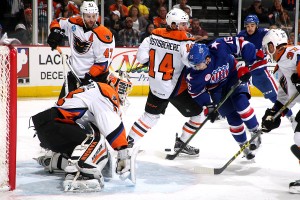