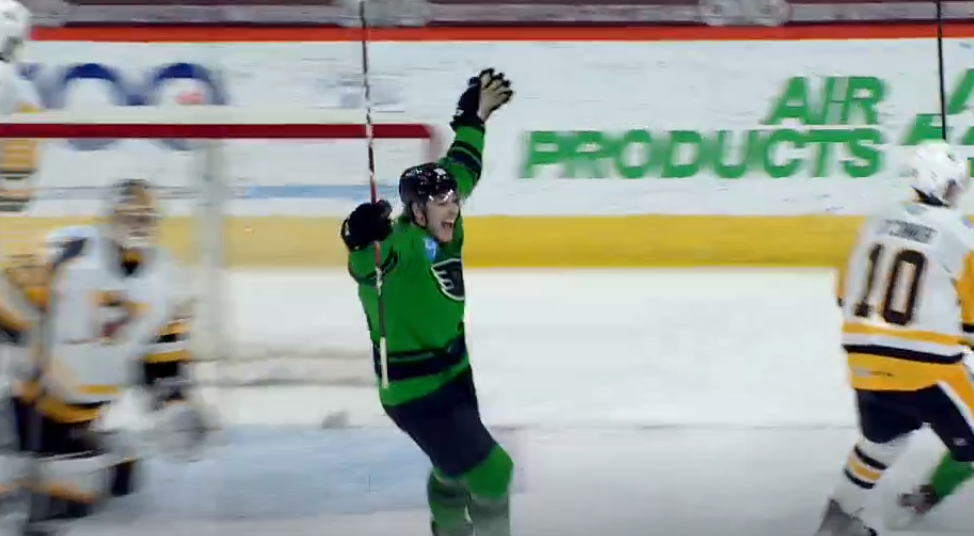 Phantoms Return With 5-4 Win Over Penguins

Lehigh Valley, PA – Tanner Laczynski scored in overtime on a wrister from the left circle in an exciting 5-4 win against the Wilkes-Barre/Scranton Penguins at PPL Center on Sunday afternoon. Laczynski had just scored his first pro goal one period earlier when he tied the score at 4-4 early in the third.

Wade Allison (2nd) and Tyson Foerster (2nd) both scored for a second consecutive game and Chris Mueller (2nd) added to the offense as well. 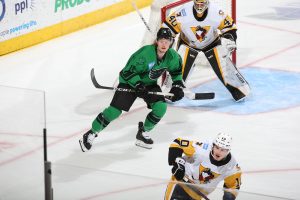 The Phantoms were returning to PPL Center for their first home game in over two weeks and also welcomed a larger crowd in their first game with 15% capacity allowed. That meant several more fans were able to join us for this thriller in what was their first live game in over a year.

First-place Lehigh Valley (8-2-2) leads the AHL with five overtime wins and also with seven overtime games played. The Phantoms’ previous four overtime victories had all been on the road.

Wilkes-Barre/Scranton (5-4-4) lost in overtime in its second consecutive meeting between the two clubs. Ryan Fitzgerald had scored the winner at their place on Monday, March 8.

The Phantoms took to the ice wearing specialty dark green jerseys in belated celebration of St. Patrick’s Day following the postponement of their scheduled game on March 17. 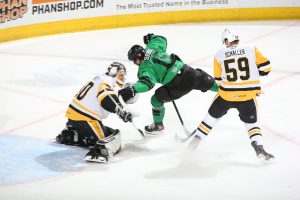 A scoreless first period showcased the intensity of a team hungry to get back to action after a pair of postponed games earlier in the week.

Then the floodgates opened with seven combined goals in the second period including six in barely more than 10 minutes.

Wade Allison struck from the top of the right circle with his powerful snapper off the far post for his second career goal in as many games. His conversion just 14 seconds into the middle frame marks the fastest goal the Phantoms had scored in a period this season. Egor Zamula had spotted him across the ice for the assist.

The Penguins wasted little time in equalizing with Nick Schilkey scoring at the net-front on the rebound of a slapshot by defenseman Cam Lee that was put in behind goalie Felix Sandstrom by Nick Schilkey (3rd) for a 1-1 tie at 1:47 into the second period.

Just 47 seconds later it would be the Phantoms retaking the lead on a quick mini-breakaway for Tyson Foerster with Logan Day identifying him flying up the middle from the right wing. Foerster put the puck to his backhand to flip the go-ahead goal over the right-pad of Penguins’ netminder Shane Starrett for a 2-1 advantage on a play also assisted by Isaac Ratcliffe.

Linus Sandin from the right wing found Chris Mueller on the backdoor to bang home another Phantoms’ tally at 4:45 into the second for a 3-1 lead on a nice secondary assist by Allison.

The Penguins surged back with consecutive goals of their own. Drew O’Connor (3rd) deflected a point shot by Billy Sweezey at 9:17 and then Jonathan Gruden (2nd) found the rebound of his own breakaway at 10:07 to even the count at 3-3 just 50 seconds later.

The Penguins took their first lead with 2:31 remaining in the middle frame on Bellervie’s shot flying up the left win on a 3-on-1. Bellerive opted to fire the puck himself.

The Phantoms evened the score at 6:55 into the third period with Derrick Pouliot receiving a pass from Mason Millman after a fallen Allison kept the play alive along the left board. Pouliot dashed around a D and was deep in the right circle when he flipped an offering back to Laczynski in the deep slot who was able to get off a quick shot through two enguins defenders attempting to tie up his stick. The rookie from Ohio State beat Starrett past the right skate for his first pro goal and a 4-4 tie.

Both teams had power-play chances to break the deadlock in the closing minutes. The Phantoms had a man advantage with 9:44 that generated a couple nice tries but nothing into the back of the net. Then Lehigh Valley’s AHL leading penalty kill was put to the test again in a critical moment after Drew O’Connor stripped the puck away and then was infracted on his way to the net. But the Phantoms’ broke up Wilkes-Barre/Scranton’s best chances on that power play as well.

Johnathan Gruden tripped up Zayde Wisdom with just 1:15 left giving the Phantoms a glorious chance in the final moments but the Penguins preserved the tie into overtime and killed the rest of the man advantage at the beginning of the extra period as well. Play had just resumed to 4-on-4 when Pouliot connected on a lead pass to Laczynski who maybe didn’t get all of is shot from the top of the left circle in beating Starrett towards the glove side for the winning tally.

The Phantoms return to PPL Center on Wednesday night taking on the Hershey Bears at 7:05 p.m. Lehigh Valley then plays a home-and-home weekend set against the Binghamton Devils which includes a road game to Newark on Friday followed by a home game back at PPL Center on Saturday. Tickets are on sale to the general public for all Phantoms home games at PhantomsHockey.com and PPLCenter.com