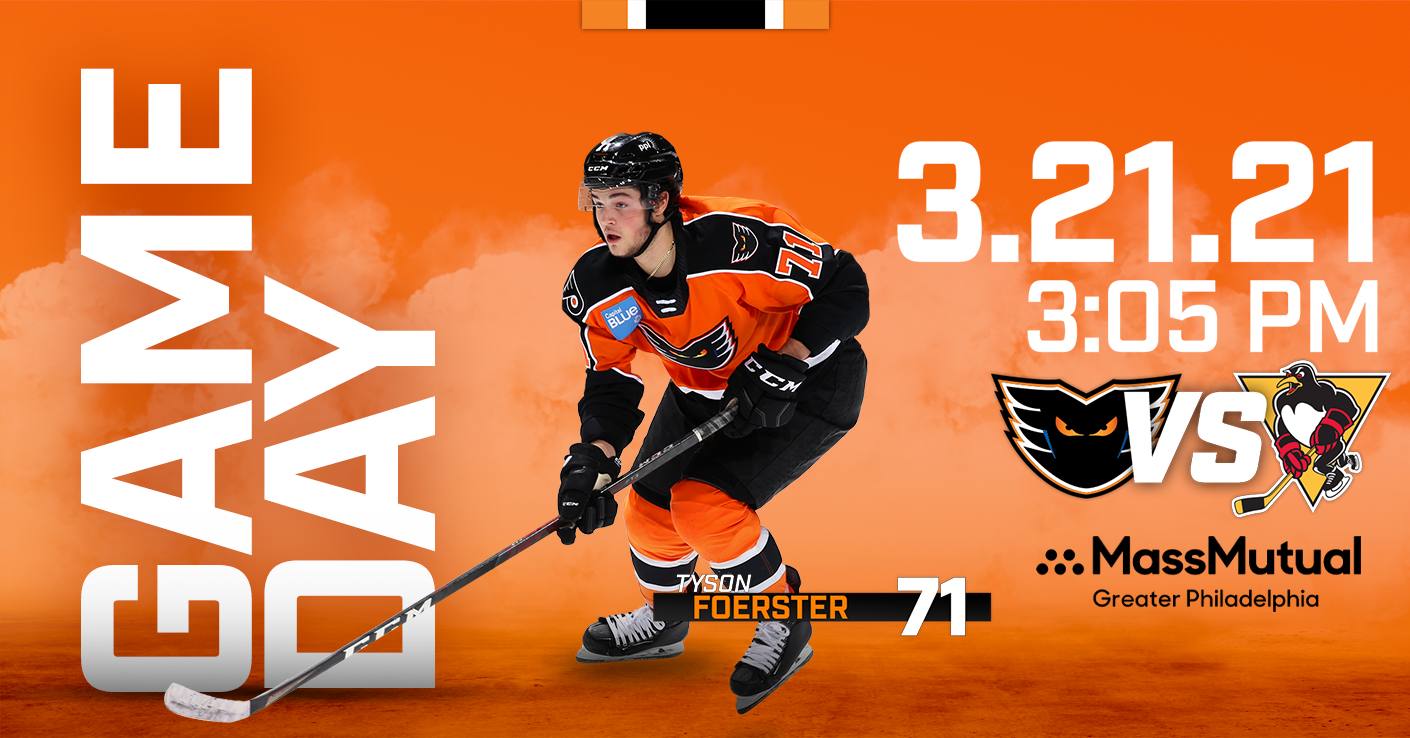 Today’s Game – The first-place Lehigh Valley Phantoms return to PPL Center taking on rival the rival Wilkes-Barre/Scranton Penguins in the team’s first Sunday home game of the year. This is the 12th game of the season for the Phantoms and the team’s fourth home game. Lehigh Valley is 2-0 on Sundays with a pair of victories at Hershey this season. The Phantoms are 2-0-1 at PPL Center and are 1-1-1 vs. the Penguins. This is Game 5 out of 10 between the Phantoms and Penguins.

Last Time Out – The Phantoms improved to 4-1-0 against the rival Hershey Bears with an impressive 4-1 win at Chocolate Town on Sunday afternoon. Wade Allison scored a goal in his pro debut and rookie Tyson Foerster also scored his first pro goal. Ryan Fitzgerald and Derrick Pouliot both had a goal and assist on the team’s two power-play goals while Zane McIntyre was terrific in net with 32 saves on 33 shots to improve to 7-1-1.

Postponed – The Phantoms had a pair of postponed games last week due to league COVID-19 protocols. Lehigh Valley’s home game on Wednesday, March 17 against the Binghamton Devils and then the away game Friday, March 19 at the Wilkes-Barre/Scranton Penguins were both called off. Make-up dates for these postponed games have not been announced.

Rescheduling – Lehigh Valley will play the Binghamton Devils at PPL Center on Sunday, April 11 at 5:05 p.m. This is the make-up date of a game that was postponed on Saturday, March 13 due to league COVID protocols affecting the Devils. Tickets for the March 13 game are good for the April 11 date.
The American Hockey League also has announced that the Phantoms will resume a suspended game at Newark on April 26 at 6:00 p.m. The game of March 10 was stopped after one period with the score tied at 1-1. The game will be completed from that point.

First Time! – Wade Allison’s snappy wrister from the top of the left circle at Hershey on March 14 went off the post and into the net for his first career pro goal in his pro debut. It was Allison’s first game in over a calendar year since the cancellation of his 2019-20 season at Western Michigan University the year before. Tyson Foerster converted on a 2-on-1 just a couple minutes into that same game on March 14 at Hershey for his first pro goal as well. The Flyes’ first-rounder in 2020 from the Kingston Frontenacs of the OHL had several close calls to scoring his first before knocking it in on the rush with David Kase set up on a nice lead pass forward by Garrett Wilson.

Milestone for Gordo – Head coach Scott Gordon has 396 career wins including 175 wins with the Lehigh Valley Phantoms and 221 wins with the Providence Bruins. Only five other coaches in AHL history have reached the 400 Win milestone.

Best in the League – The Phantoms boast the two highest scoring active players in the AHL. Cal O’Reilly is first with 619 points while Chris Mueller is second among all active AHL players with 568 points and is first with 242 goals. The 35-year-old Mueller also leads all active AHL’ers in games played with 780. O’Reilly is captain with his fourth AHL team (also with Rochester, Utica, Iowa). Mueller has won the Calder Cup twice (Toronto 2018 and Texas 2014).

Let’s Stay Late – The Lehigh Valley Phantoms have played six overtimes in eleven completed games to lead the AHL in extra-period hockey. Lehigh Valley has the most overtime wins (4).The Phantoms have all four of their overtime wins on the road this season with Ryan Fitzgerald (Feb 6 at Hershey), David Kase (February 14 at Hershey), Max Willman (February 20 at Binghamton) and Ryan Fitzgerald again (March 8 at Wilkes-Barre/Scranton) scoring the winners. Binghamton’s Brett Seney (February 10) and Wilkes-Barre/Scranton’s Frederick Gaudreau (Feburary 27) have victimized the Phantoms in the 3-on-3 session. Ryan Fitzgerald became just the third player in Lehigh Valley history to score two overtime goals in a single season.

Scouting the Penguins – Wilkes-Barre/Scranton has dropped two straight against Syracuse since a six-game point streak. Friday night they Penguins fell to the Crunch 5-2 despite 41 shots on goal against Chris Gibson. Big Czech center Radim Zohorna leads the team with nine points but has been recalled to Pittsburgh. Nick Schilkey also has nine points including seven assists. 30-year-old Tim Schaller has 276 games of NHL experience primarily with Vancouver, Boston and Buffalo and also leads WBS with four goals tying him with second-year pro Jordy Bellerive. Rookie speedster Felix Robert scored both of his goals against the Phantoms.

The Series – Lehigh Valley is 1-1-1 against the Penguins this year including a 4-3 overtime win at Wilkes-Barre in their last meeting on Monday, March 8 when Ryan Fitzgerald scored the winner. Frederick Gaudreau had an overtime goal for the Penguins on February 27 in their only visit to PPL Center this season but the former long-time Nashville Predator and Milwaukee Admiral is now up with Pittsburgh. Max Willman has scored three goals against WBS.

Upcoming – The Phantoms return to PPL Center on Wednesday night hosting the Hershey Bears. Then the Phantoms have a home-and-home series against the Binghamton Devils including a Friday night clash in Newark following by a Saturday night rematch in Allentown.