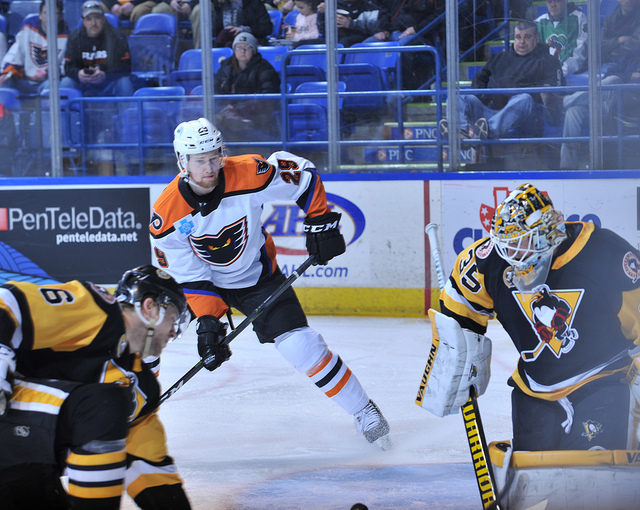 Wilkes-Barre, Pa. – Rookie forward Pascal Laberge scored his first goal as a pro to break a 1-1 tie in the second period helping push the Lehigh Valley Phantoms to a 3-1 victory at the rival Wilkes-Barre/Scranton Penguins on Wednesday night. 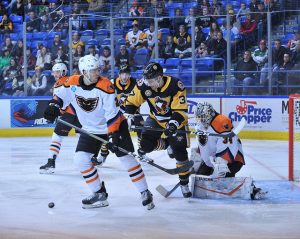 Laberge only joined the lineup just two weeks ago having fully recovered from hip surgery last September. The 20-year-old lit the lamp in his fourth game of the season on a cross-ice feed by Chris Conner who spotted an open Laberge on the backdoor on the left of the cage.

Connor Bunnaman (15th) and Byron Froese (1st with Phantoms) also scored for Lehigh Valley while Misha Vorobyev contributed a pair of assists for his first multi-point game since January 25. Alex Lyon turned in a 27-save performance in the victory while pushing the Phantoms to their second win in the last three games.

The Phantoms improved to 3-1-1 at Mohegan Sun Arena at Wilkes-Barre/Scranton (27-23-8). The two rivals will still meet five times in the remaining 17 games of the regular season.

Lehigh Valley (29-24-6) also pulled to within three points of the fourth-place Providence Bruins for the final playoff spot in the Atlantic Division and the Phantoms are also just four points back of the third-place Hershey Bears.

The Phantoms opened the scoring at 11:25 into the first period on Connor Bunnaman’s one-timer from the left slot. Vorobyev on the left-boards flipped the pass into the middle for the rookie forward to fire in the goal on the stick-side of Tristan Jarry for a 1-0 lead. Veteran defenseman David Schlemko also assisted on the play as the Phantoms recorded a power-play goal for a third consecutive game.

Wilkes-Barre/Scranton responded in the opening minutes of the second period when Adam Johnson (17th) jumped on the rebound of a Matt Abt shot that caromed off the left leg of Lyon. 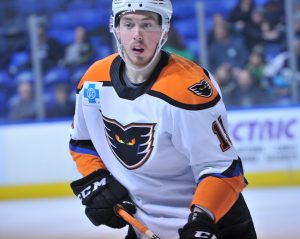 But the Phantoms re-took the lead just over two minutes later on the eventual game-winning conversion by Laberge at 4:03 into the second period.

The Phantoms carried the play for much of the first and second periods but only held a one-goal lead entering the third. Wilkes-Barre/Scranton increased its urgency in the final frame and had a number of close calls for equalizers but Lyon slammed the door every time. A penalty at 7:02 into the third providing the Penguins their third power play was a particularly dangerous spot but the league’s top penalty-kill unit again pulled through with a number of key blocks and big stops from Lyon. The Phantoms have killed 19 of the last 20 power plays they have faced over the last seven games.

Froese scored his 15th of the season and his first with the Phantoms to essentially seal the win in the closing minutes. Froese had joined the Phantoms three weeks earlier in a trade with the Montreal Canadiens organization. He had scored 14 goals with the Laval Rocket prior to joining the Phantoms.

Greg Carey and David Kase pressured on the forecheck and forced the Penguins to push the puck to the right point where Froese held the line. Carey went in behind the goal with more pressure leading to his connection with Kase out in front. The rookie winger from the Czech Republic was back in the lineup for just his third game following a three-month layoff with injury and smartly found Froese on the right of the cage for an open tap-in. 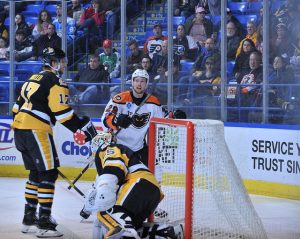 Froese was tripped up in the neutral zone with 1:30 left trying for an empty-netter but found Tyrell Goulbourne who had the puck roll off his stick and miss the open goal-mouth off the right side of the cage. But the missed opportunity was no problem for the Phantoms who had already virtually locked the victory to that point.

Lehigh Valley was 1-for-3 on the power play while holding the Penguins to 0-for-3. The Phantoms out shot Wilkes-Barre/Scranton 34-27.

The Lehigh Valley Phantoms open a five-game homestand this weekend with Friday and Sunday games against the Charlotte Checkers who currently pace the entire 31-team American Hockey League. Friday at 7:05 p.m. features Phantoms hockey card packs for the first 6,500 fans presented by Upper Deck. Sunday at 1:05 p.m. includes postgame photographs with the players on the ice for fans who stay after the game. Please be aware that Daylight Savings Time is this weekend. Tickets are available at PPLCenter.com

NEXT TIME OUT: The Lehigh Valley Phantoms return to PPL Center for a pair of games against the Charlotte Checkers on Friday and Sunday.