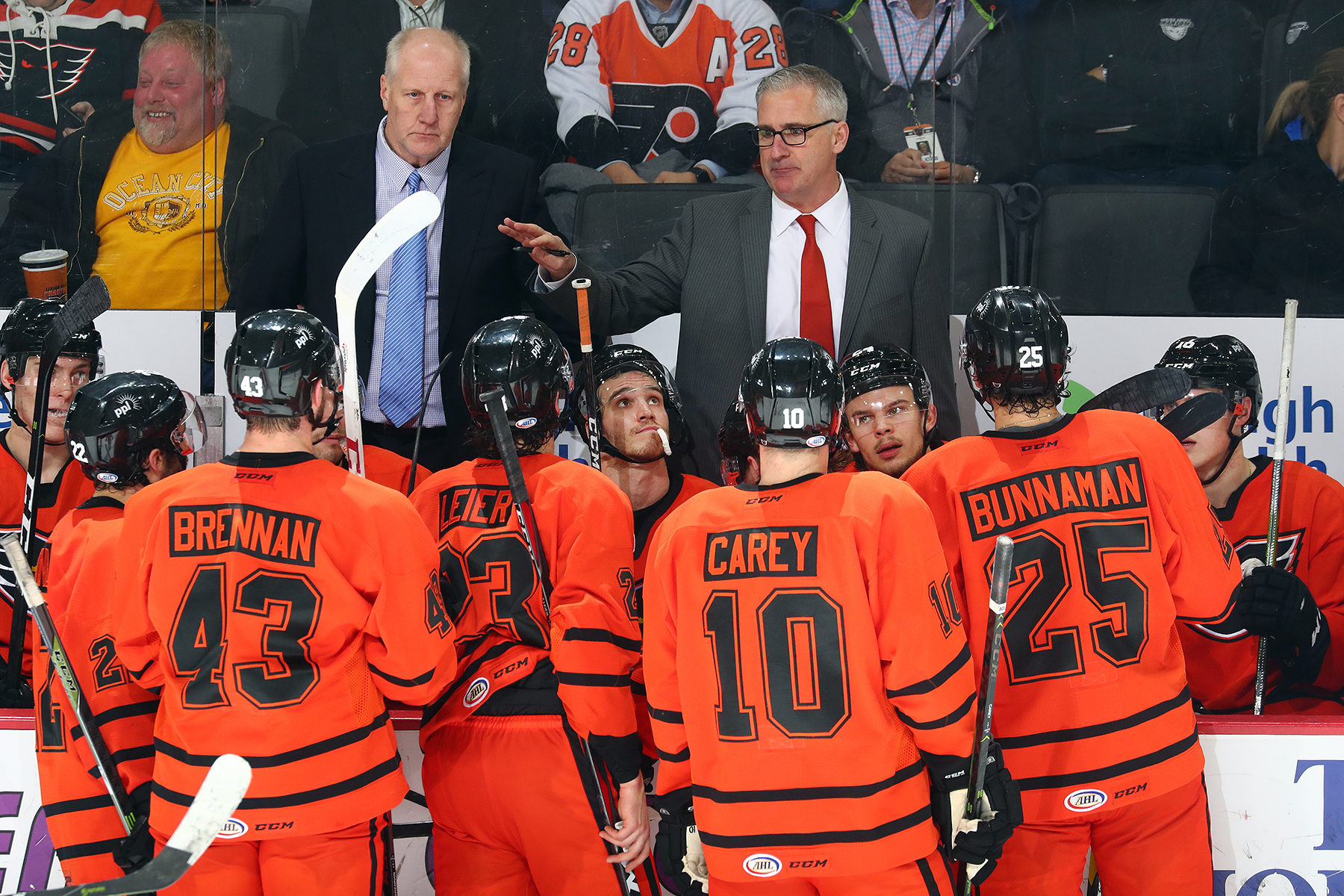 Lehigh Valley, PA – Kerry Huffman slid into his role as the new, acting head coach of the Lehigh Valley Phantoms and the players responded commendably in a complete performance and a 5-0 victory over the Hershey Bears on Wednesday night at PPL Center. 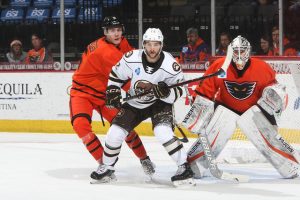 Alex Lyon’s 18-save shutout was good for his fifth blank sheet all-time and his first in a couple seasons. And Chris Conner’s pair of assists pushed him past 500 points in the American Hockey League as the 34-year-old veteran winger became the 94th player to reach the impressive milestone.

Kerry Huffman, 50, was officially the team’s head coach for the first time ever after over two seasons as an assistant coach. The former Philadelphia Flyers defenseman was joined by acting assistant Kjell Samuelsson who stepped onto the bench again alongside his former defensive partner “a few” seasons ago when they were teammates.

Lehigh Valley (16-9-2) players entered the game with the mindset of winning for their new head coach in the absence of the recently promoted Scott Gordon who took over as interim head coach of the Philadelphia Flyers earlier in the week.

“Can’t say enough about that,” Alex Lyon reiterated about their motivation in playing well for Huffman. “I’m sure you guys get the impression but everybody in here really loves him. Just so excited for him for his opportunity, as well as Gordo moving up there. But it’s Huffer’s first coaching job so for him to get in here and have this opportunity, we all want to do everything we can to make sure it’s successful for him.” 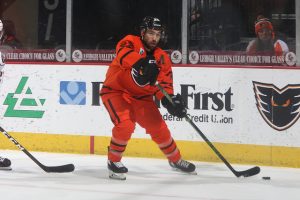 Alex Lyon faced a few tricky chances from the Bears scattered among the 18 total shots against but mostly had a more routine night thanks to the clamp-down performance by the defense in front of him. The closest Hershey came to scoring came early in the second period when Jayson Megna shot from the left circle under the right pad of Lyon. While the puck was slowing dribbling behind him, Lyon appeared to think he was on top of the puck. Defenseman Mark Friedman sprinted in to address the danger and pull the puck out practically on the goal-line.

“I like to think that I save his bacon more!” Lyon quipped of the goal-saving moment. “No, I’m kidding. He was great tonight. And Phil Samuelsson pushed another one out of the way too. Sometimes those things go your way and sometimes they don’t. It’s just good to be on the right side of it.”

Lehigh Valley benefited from an almost-accidental goal to open the scoring just over 13:00 into the game. Philip Samuelsson’s shot from the left point was deflected off the stick of Alex Krushelnyski and then bounced off the shin-pad of Mike Vecchione and through Vitek Vanecek for a 1-0 lead. Vecchione did not appear to realize that the puck had hit him and tried to give the credit to Krushelnyski who led the high-five line at the bench. But whether he knew it at the time or not, Vecchione had scored his eighth of the season and also scored for a second consecutive game.

The Phantoms scored consecutive goals over the right shoulder of Vanecek about three minutes apart in the second period on a pair of powerful blasts. Misha Vorobyev up the left boards neatly left a puck in the high slot to perfectly meet Carsen Twarynski in stride who cranked up a slapper to the upper-left corner at 5:24. And then at 8:18 into the second period, it was an errant clear by a Hershey defenseman that hit off a stanchion and bounced out to an awaiting Aube-Kubel who was also ready to strike to the upper-left portion of the cage for a 3-0 lead. 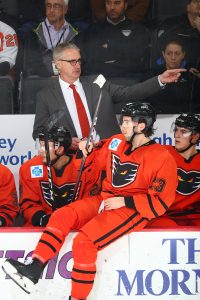 The Phantoms capped the scoring in the third period with a pair of power-play strikes.

Greg Carey’s team-leading 14th goal of the season came on a mid-air swat from the right of the cage following a rebound off a T.J. Brennan center-point blast. Chris Conner from the left boards had slid the puck over prior to the shot to record his milestone 500th point in the American Hockey League.

The Phantoms also scored with 3:09 remaining on a power play AND a delayed penalty. Taylor Leier had just been high-sticked when another scramble down low caused headaches for the Bears. This time it was Bunnaman with the backhand conversion for his sixth of the year, half of which have come against Hershey’s netminder Vanecek.

Lyon’s fifth career shutout now ties him with Dustin Tokarski for the most ever with Lehigh Valley. It was also the 17th shutout in Lehigh Valley history and the second this season, both of which have come against Hershey. Interestingly, the night also represented the 100th all-time shutout in the history of the Phantoms franchise.

Just a month ago, Conner had celebrated his 800th professional game and also his 300th AHL assist in an awesome stretch of milestone that led to 500th AHL point tonight. The fourth-year Phantom is the all-time leading scorer in Lehigh Valley history with 171 points which also rates 10th all-time for the Phantoms franchise.

Lehigh Valley out shot the Bears 34-18. The Phantoms were 2-for-7 on the power play while the penalty kill went a perfect 3-for-3.

The Phantoms return to action at PPL center on Friday evening against the Syracuse Crunch on “Wizard Night” and then will travel to Hershey for a Saturday rematch before a three-day holiday break.