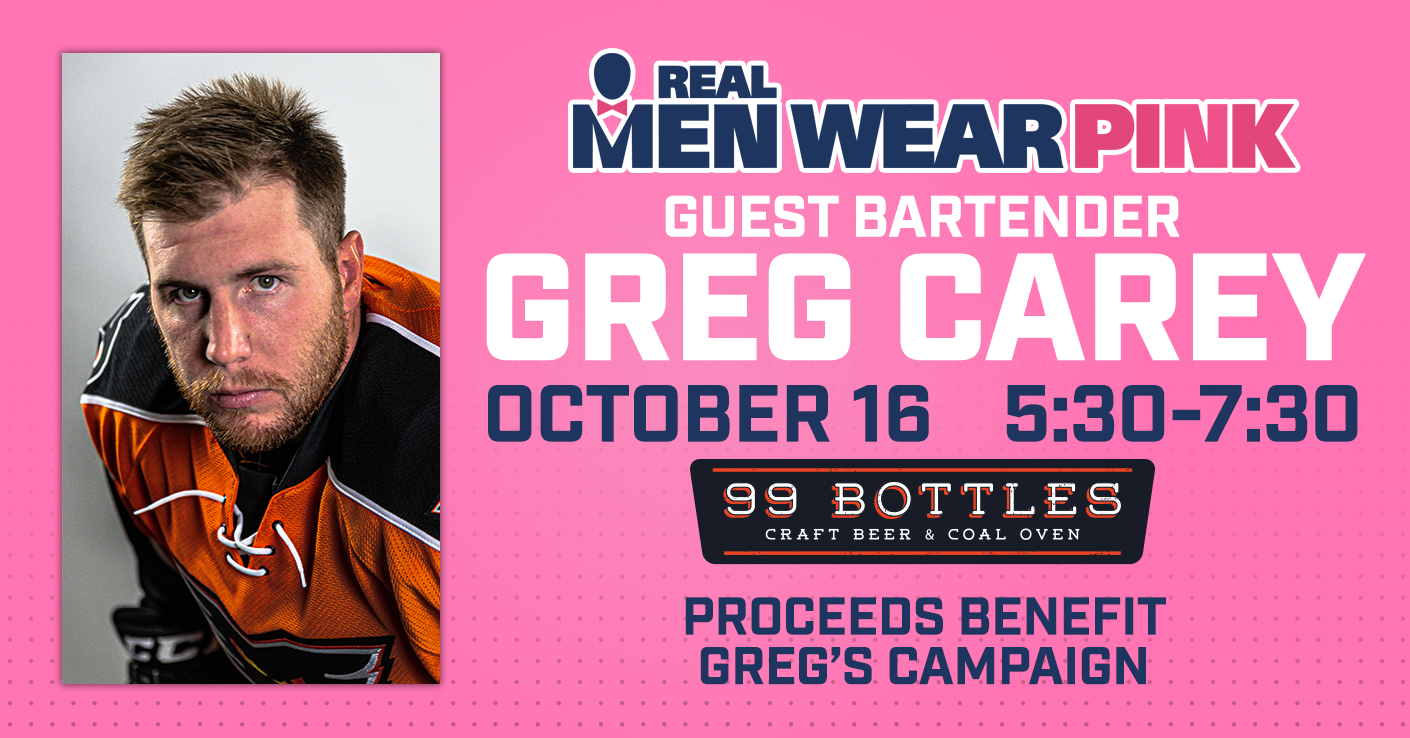 “The Real Men Wear Pink Campaign is definitely one of the larger ones that we have here during the year and it’s something that we take a lot of pride in,” Carey said.  “The last couple years we have had some great success with it and I’m just hoping to keep that going.  Obviously some of the guys that have done it in the past are now gone, but I’m happy to fill their shoes and do the best I can in trying to raise awareness.

“Breast cancer affects everyone, and that doesn’t matter if you’re a man or a woman.  The past few years here in Lehigh Valley, I’ve seen a number of brave people and families that have been affected by cancer in one way or another.  I’d like to consider myself a leader on the ice and because of that, I’m in a position where I can make a difference within this community.  If I can help to raise money and awareness through the Real Men Wear Pink Campaign, well then I’m going to make that happen.”

To help bolster Carey’s Campaign to raise $10,000, the forward will be hosting a guest bartending event at 99 Bottles inside of PPL Center on Wednesday, October 16, from 5:30 to 7:30 p.m.  There will be both food and drink specials that night as well as a raffle with multiple prizes in which all of the proceeds will go towards Carey’s Campaign.

“I can sling a couple cocktails,” Carey said smiling.  “I was hurt a couple years ago and I kind of put myself through bartending school via YouTube.  I can craft a couple specialty cocktails that night and I look forward to seeing the people come out and have some fun.”

Fans can also assist Carey by donating to his cause via his page by clicking on the link HERE.

The Real Men Wear Pink Campaign is designed to give men a leadership role in the fight against breast cancer. Men around the nation will use the power of pink to raise awareness and money for the American Cancer Society’s breast cancer initiatives, including innovative research, patient services and education around screenings and risk reduction.

Every day, the American Cancer Society is saving more lives from breast cancer than ever before. They’re helping people take steps to reduce their risk of breast cancer or find it early, when it’s easier to treat. They provide free information and services when and where people need it. They fund groundbreaking breast cancer research and they’re working to ensure access to mammograms for women who need them.

For the fourth consecutive year, the Phantoms will again be partnering with the American Cancer Society for their annual Pink in the Rink game on Friday, December 6.  The night will both help raise awareness and salute the brave men and women who are battling or have battled breast cancer.  The game will also feature a special pink Phantoms Ball Cap Giveaway presented by Service Electric Cable TV & Communications to the first 6,500 fans in attendance. Tickets for the game can be purchased by clicking HERE and a portion of each ticket price will go back to help Carey’s Real Men Wear Pink Campaign.

Prior Phantoms Representatives for the Real Men Wear Pink Campaign

For the past four years, a member of the Lehigh Valley Phantoms has participated in the ACS Real Men Wear Pink Campaign.  Together, with the support of the fans, they have managed to raise over $40,000 to help raise awareness for and battle breast cancer.