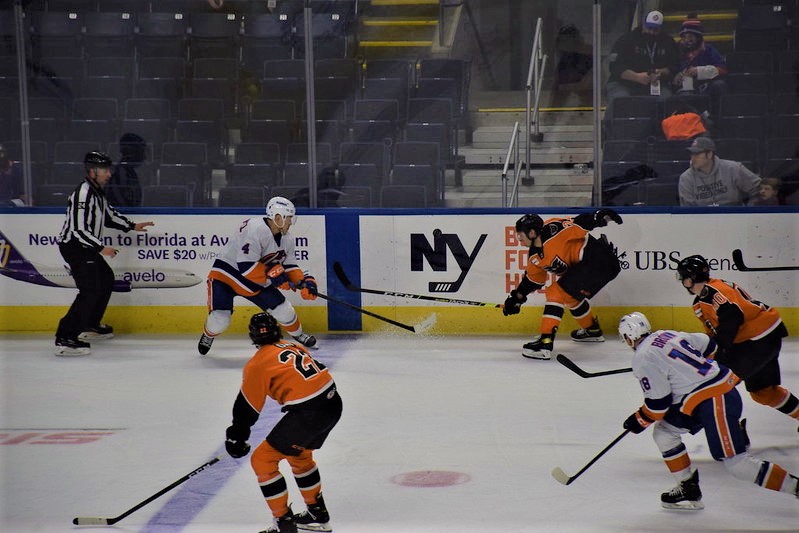 Bridgeport, CT – Nick Lappin (3rd) pulled the Phantoms to within a goal in the second period but a stingy Islanders defense with a shot-block mentality would hold the Phantoms out the rest of the way in a 4-1 Bridgeport victory in a Wednesday morning game.

Lehigh Valley (14-15-8) saw their two-game win streak come to an end as they missed out on an opportunity to pass the .500 mark. It was only the second time in the last two months in which the Phantoms were held to only one goal.

The Lehigh Valley Phantoms were making their second-ever visit to Bridgeport’s annual Morning Kids’ Day Game and were playing in a morning start-time for the fourth time ever. The Phantoms won in Bridgeport 4-2 in an early start four years ago but were unable to find the comeback rally on this occasion during the team’s first visit to Webster Bank Arena in two years. Lehigh Valley is now 2-2-0 in morning starts.

Islanders first-rounder Simon Holmstrom (6) opened the scoring from the right of the cage for a 1-0 lead with 6:06 remaining in the first period. Bridgeport had been pushing and Felix Sandstrom made some nice saves to keep the Islanders out. Lehigh Valley also generated some strong scoring chances on 35-year-old veteran goalie Cory Schneider. Former Bridgeport Sound Tiger Ryan MacKinnon almost scored his first goal as a forward but was denied point-blank on one of Schneider’s strongest saves of the game. The Phantoms out shot the Islanders 10-8 in the first period.

Bridgeport (16-18-8) took stronger control of the game in the second and opened a 2-0 lead on Andy Andreoff’s (8th) goal down low on the rebound of a Chris Terry blast from the left circle. Sandstrom scrambled over to his right for a terrific save on the initial drive but Andreoff pushed through the rebound with 15:33 remaining in the second.

Lehigh Valley got on the board two minutes later on some continued strong play from the fourth liners. MacKinnon got to the puck behind the goal and worked it around to Brennan Saulnier on the right boards who quickly set up Logan Day for a one-timer from center point. Lappin was at the doorstep to redirect the drive and pull the Phantoms to within a goal at 2-1. It was Lappin’s second goal in the last fourth games and his third of the season. It was also an appropriate reward for the hard-working fourth line who played a strong game consistently generating good chances.

Jeff Kubiak (4th) received a cross-crease pass from Arnaud Durandeau with 9:12 left in the third to give Bridgeport a 4-1 advantage and close the scoring.

Lehigh Valley is 1-2-0 against Bridgeport this season. The Phantoms have three games remaining against the Islanders, all in April.