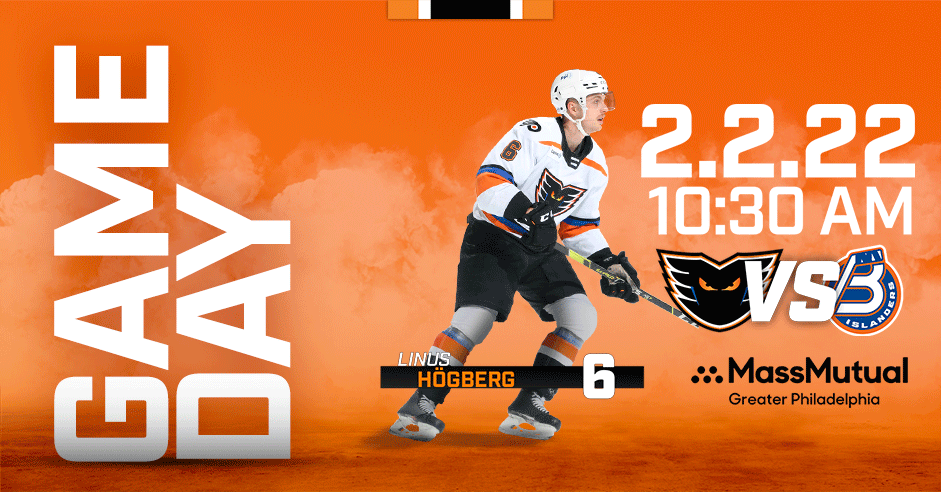 TODAY:  Rise and Shine, Phantoms Fans!!
It’s a morning-style GAMEDAY presented from Bridgeport by MassMutual. The Lehigh Valley Phantoms look to go over .500 for the first time this season as they pprovide the opposition in the annual Bridgeport Islanders’ Morning Game at Webster Bank Arena. The Phantoms are 14-14-8 overall and are 11-3-3 in their last 17 games. The last-place Bridgeport Islanders are 15-18-8 but have been playing well and are looking to keep it tight in the standings.

LAST TIME: Cal O’Reilly scored a pair of shorthanded goals to tie a franchise record and the Phantoms rallied from behind for a 3-2 victory over the Hershey Bears. Linus Sandin scored the game-winner with under 6:00 remaining just a couple minutes after he set up O’Reilly’s breakaway shortie that tied it.

TRANSACTIONS: Jackson Cates has been recalled to the Flyers’ Taxi Squad

News and Notes:
– Lehigh Valley is 2-1-0 all-time in morning games including a 4-2 win at Bridgeport on November 8, 2017 and a 4-0 shutout win for Anthony Stolarz at Hartford on November 2, 2016. The Phantoms lost in their most recent morning game, 2-1, on November 18, 2019 at Springfield.
– Cal O’Reilly’s two shorthanded goals on Sunday tied a franchise record. The only other player to accomplish the feat was Jason Akeson who scored two shorthanded goals for the Adirondack Phantoms on March 21, 2014 at the Utica Comets.
– Lehigh Valley has gone 11-3-3 in its last 17 games after a beginning that saw just three wins in the first 19 games at 3-11-5.
– Linus Sandin is on a three-game point streak (1-3-4) since his return to the Phantoms after making his NHL debut last week.
– Cal O’Reilly has 15 points (5-10-15) in his last 11 games including five multi-point games in that stretch.
– Defenseman Adam Clendening has 12 points (2-10-12) in his last 12 games including four multi-point games in the last nine.
– 11 Phantoms players this season have also suited up for the Philadelphia Flyers: Wade Allison, Connor Bunnaman, Jackson Cates, Morgan Frost, Gerry Mayhew, Isaac Ratcliffe, Linus Sandin, Felix Sandstrom, Max Willman, Cam York, Egor Zamula

UP NEXT: The Phantoms have a morning game on Wednesday, February 2 at the Bridgeport Islanders and then return to PPL Center on Friday, February 4 againt the Providence Bruins on Season Ticket Holder Appreciation Day.