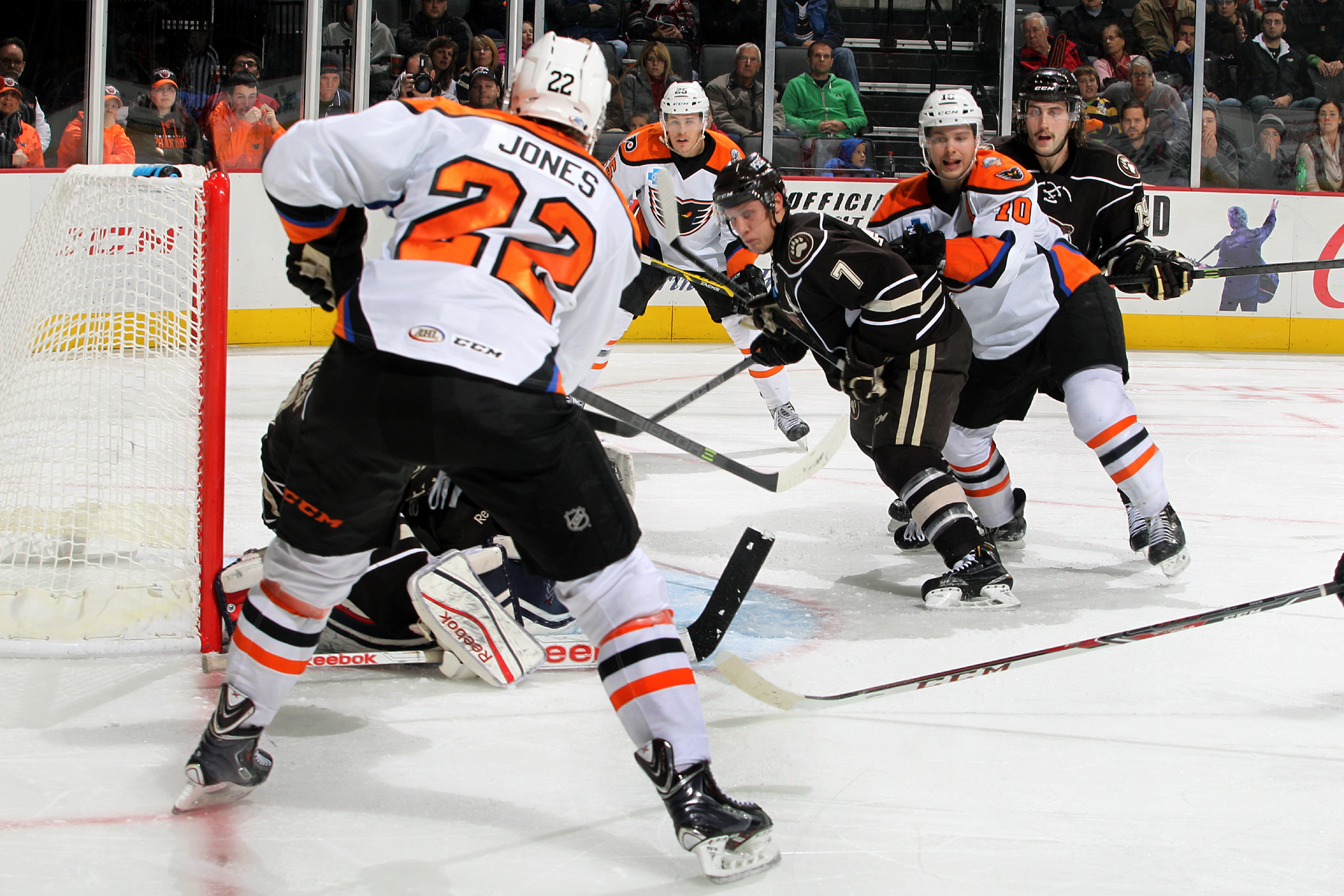 Lehigh Valley, PA – Less than 24 hours after his loan to the Phantoms by the Philadelphia Flyers, Blair Jones made an instant impact in Lehigh Valley registering an assist and netting the shootout game-winner Wednesday evening as the Phantoms captured a dramatic 3-2 victory over the Hershey Bears in front of 6,991 fans at PPL Center. With the win, Lehigh Valley improved to 7-6-1 on the year and is now an impressive 4-1-1 in its new home. The Phantoms also improved to 5-1-1 in one-goal games.

“That’s a good look at maybe what overtime will be in the NHL some day,” said Phantoms head coach Terry Murray. “If they want a copy of that video I’ll send it to them. That was very exciting.”

Murray’s raves were in reference to a wild, back-and-forth seven minute overtime session that featured multiple breakaways for both sides.

Andrew Gordon and Brandon Manning scored for Lehigh Valley in regulation while Rob Zepp was masterful between the pipes once again as he compiled 27 saves in earning his seventh win of the season.

The Phantoms found their scoring touch early when Jones fed a perfect cross-ice pass to Gordon at the right side of the net who made no mistake in driving home his fourth goal of the season. Jones, who hadn’t played since the Flyers hosted the Detroit Red Wings on October 25th, displayed instant chemistry with his new club as the Phantoms scored just 3:21 into the contest garnering the game’s opening goal for the fifth time this season. The Phantoms improved to 3-2 when scoring first this year.

“He had a big play on the first goal obviously,” Murray said of Jones. “He played a significant amount of minutes and I thought he handled it pretty well. I know he’s a skilled player and he’s got a resume with a lot of points.”

Meanwhile, the secondary assist went to Robert Hagg as the 19-year-old defender garnered his eighth point in just his 14th game of the year.

But the Phantoms didn’t settle for a one-goal advantage in the game’s early stages as Lehigh Valley doubled its pleasure three and a half minutes later when Manning snapped in his fourth goal of the season with a high-slot wrist shot 6:50 into the opening period. The conversion extended Manning’s goal-scoring streak to a Lehigh Valley season-high three straight outings. The only assist on the even strength strike went to Nick Cousins who set up the tally with a clean faceoff win in the Hershey zone. The helper was Cousins’ team-leading eighth assist and 12th point of the year.

Lehigh Valley’s two-goal advantage remained throughout much of the second frame despite a bevvy of scoring opportunities for both sides. The Phantoms nearly added another conversion near the midway point of the period when, while on the power play, Hagg fed a slap pass to the low slot which was redirected by Cousins just off the outside of the left post of the Hershey goal. The Bears promptly countered with a series of man-advantage scoring chances, which were expertly denied by a tenacious Lehigh Valley penalty kill coupled with Zepp’s stalwart efforts in goal.

Hershey was able to cut the Phantoms’ lead in half just prior to the second intermission when Dane Byers deposited his fourth goal of the season at the 17:12 mark of the middle stanza. Chris Connor and Kris Newbury assisted on the man-advantage marker.

The Bears then leveled the contest 3:30 into the final frame when Newbury burned his former team notching his league-leading 10th goal of the season. Byers and Connor Carrick assisted on the five-on-five tally which gave way to a host of drama to close Wednesday’s festivities.

With a level score at the close of regulation, Phantoms fans enjoyed bonus hockey for the third time in just six games at PPL Center. And there were chances galore in the overtime period. A shorthanded breakaway by Hershey’s Joel Broda was sent just wide before Kevin Goumas, celebrating his 23rd birthday, missed on a breakout chance at the other end. All told, the Phantoms amassed seven shots in overtime but were unable to solve Bears netminder Philipp Grubauer.

That is, until the shootout.

In the first shootout in the history of PPL Center, Jones was able to beat Grubauer high to the glove side while Zepp denied shootout attempts from Stanislav Galiev, Chandler Stephenson and Dustin Gazley sealing the victory for the Phantoms.

With the win, Zepp improved to 7-3-1 on the season and allowed just two goals against for the seventh time in 11 appearances. Grubauer suffered the shootout defeat for the Bears despite 37 total saves.

Lehigh Valley is 2-0 on its five-game homestand, the team’s longest of the season. The Phantoms look to continue their success this Friday and Saturday during their Movember Weekend hosting the Worcester Sharks and St. John’s IceCaps back-to-back. Friday is another Orange-Out T-Shirt Giveaway Night celebrating the power of the mustache in the team’s continued push to raise funds and awareness for men’s cancer issues. Saturday will feature mustache face-painting in the concourse from the Phantoms Wives and Girlfriends.

Tickets are available for both games at the Mealey’s Furniture Box Office at the main entrance of PPL Center or at 610-347-TIXX (8499) or online at PPLCenter.com

OT Period- No Scoring.Penalties-Conner Her (tripping), 0:44.