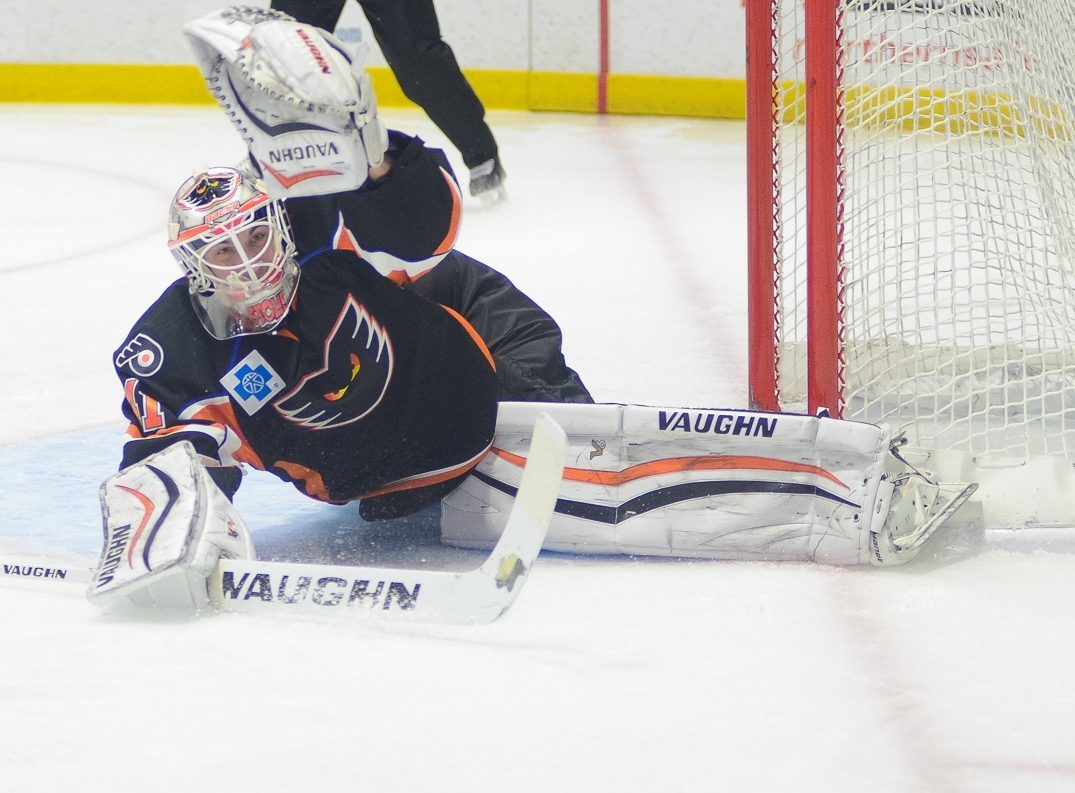 Utica, NY – The Lehigh Valley Phantoms received a sparkling 28-save performance from goalie Anthony Stolarz in one of his best games of the year en route to a 3-1 road victory at the Utica Comets to open their three-game road swing.

Veteran defenseman Andrew MacDonald contributed two assists, a number of blocked shots and passes, and was perhaps the Phantoms best skater throughout much of the night. Evan Rankin (1st), Jesper Pettersson (1st) and Danick Martel (8th) provided the goal-scoring punch for the Lehigh Valley attack. 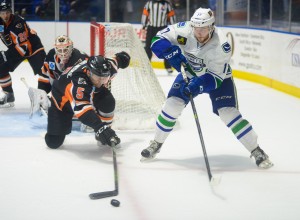 It was a return to the scene where he took a minor injury just one week prior for the 21-year-old Stolarz who is in his second season at the professional level. Last Wednesday in Utica, Stolarz had to depart after the first period and then sat out for the team’s next games on Friday and Saturday. But feeling 100% again, Stolarz would be tested early and often as the Comets fired away from all angles and also worked their way in for a few tries in tight.

In one of his best saves of the year, Stolarz acrobatically flashed out the right leg to rob Mike Zalewski on a point-blank drive culminating their speedy odd-man rush into the zone. Without having played for a little while after his brief sojourn to the injury side of the roster Stolarz was pleased with his ability to step right back into the swing of things.

“It’s huge for me,” Stolarz said. “Confidence is sky-high. To miss a week and come back and be able to play as well as I did tonight I think is a good boost for me and a good boost for the team. I need to give the shout-outs as well to the trainers and strength and conditioning staff! Patty (Dragoone) and Joe (Mele) for helping me get back as quick as I can. Hopefully this isn’t something that will be bothering me and I’ll be good the rest of the year.”

The Phantoms were out shot in the first period 12-4 but were able to emerge with a 1-0 advantage thanks to the determination of Stolarz and also of Tyrell Goulbourne. The swift skater cruised deep up the right wing and carried behind Utica goalie Richard Bachman before Goulbourne would then drop for a trailing Evan Rankin who nicely powered through his first of the season. Andrew MacDonald also received credit for the first of his two helpers on that play. 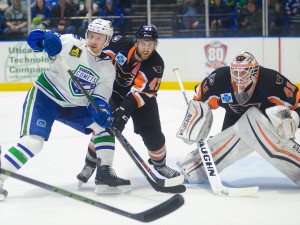 After hanging onto the lead despite the relentless Comets’ attack of the first period, the Phantoms would turn their game around in the second period and generate the majority of the chances in the first few minutes. But after a Taylor Leier double-minor penalty for high sticking it was time for the Phantoms penalty kill to get to work. Lehigh Valley limited Utica throughout the nearly three-and-a-half minutes of their third and fourth power plays of the game.

“I remember looking up and at that point we were outshooting them 7-4 in the second period,” head coach Scott Gordon said. “And then (almost) four minutes (on the power play) they got one shot…. Our penalty kill did a good job tonight and obviously Stolie is a big part of that too.”

Utica would get the early jump in the third period and quickly even the count at 1-1. Stolarz came to the side of the crease to play the puck and found himself tangled in some incidental contact with a Utica player. That allowed Mike Zalewski to carry wide behind the goal and connect with Alex Friessen crashing into a completely open net for his fourth of the year.

But Lehigh Valley would continue to battle and would take the lead and tack on a little breathing space with goals just 1:25 apart midway through the third period.

Brandon Alderson, carrying the puck along the right wing, would induce a penalty but was able to use his long reach to hang onto the puck away from the desperate attempts of the Utica defense to obtain possession. That allowed the Phantoms to pull their goalie on the delayed penalty and Andrew MacDonald stretched up to the left corner to support Alderson. MacDonald smartly found an open teammate across the ice and his pass from the left corner fired over to Jesper Pettersson at the top of the right circle was perfectly placed for the young Swedish defenseman to crank up a one-timer for his first goal of the season. 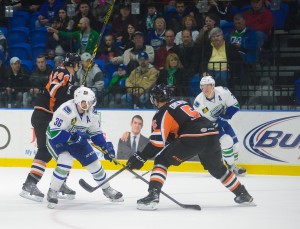 Pettersson’s goal that gave the Phantoms the lead at 9:10 into the third period was the third of his pro career and his first time scoring against a team other than Wilkes-Barre/Scranton or a goalie other than Matt Murray. It was also the third straight time for a Pettersson lamplighter to hold up as a game-winner.

Just 1:25 later it would be rookie Danick Martel flying up the left wing after an interception. With Aaron Palushaj joining the play up the middle for their two-on-one, Martel would opt to take the shot himself and drove his eighth of the season off the right arm of Bachman and into the net for the 3-1 lead.

Utica pulled their goalie with three minutes left in their hopes of narrowing the margin but the Phantoms defense continued to stay strong in an extended 6-on-5 kill that included a couple more solid defensive stops from MacDonald.

The Phantoms improved to 10-11-1 with the victory while Utica’s four-game win streak came to an end as their record dipped to 9-9-2. Lehigh Valley has found the away-ice scenarios in the American Hockey League to not be so disadvantageous after all as their 6-5 road record can attest. The Phantoms do not return to Utica this season and finished with a 1-1 record at the Memorial Auditorium. The Comets make their first ever visits to Allentown in February with a pair of PPL Center invasions.

Utica out shot the Phantoms 29-18. Stolarz made 28 saves to improve to 8-4-1 while lowering his goals-against average to 1.89 which rated fourth in the AHL. His .932 save percentage currently places as seventh-best.

Rookie center Joe Rehkamp made his American Hockey League debut wearing jersey #44 for the Phantoms and thus became the 21st player to skate at the forward position in their injury-plagued season. 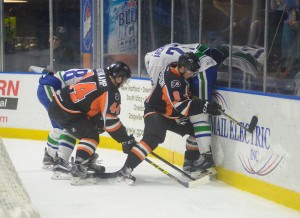 The Lehigh Valley Phantoms continue their three-game road swing with a weekend renewal of their Pennsylvania rivalries. Friday night they travel to the Wilkes-Barre/Scranton Penguins to face the top team in the AHL. Saturday night at Hershey will be the 200th meeting all-time between the Phantoms and Bears in the 20-year history of their rivalry series. All the action can be heard both nights beginning with the Countdown to Faceoff at 6:20 on 1470-AM, FOX1470.com and the iHeartRadio app.