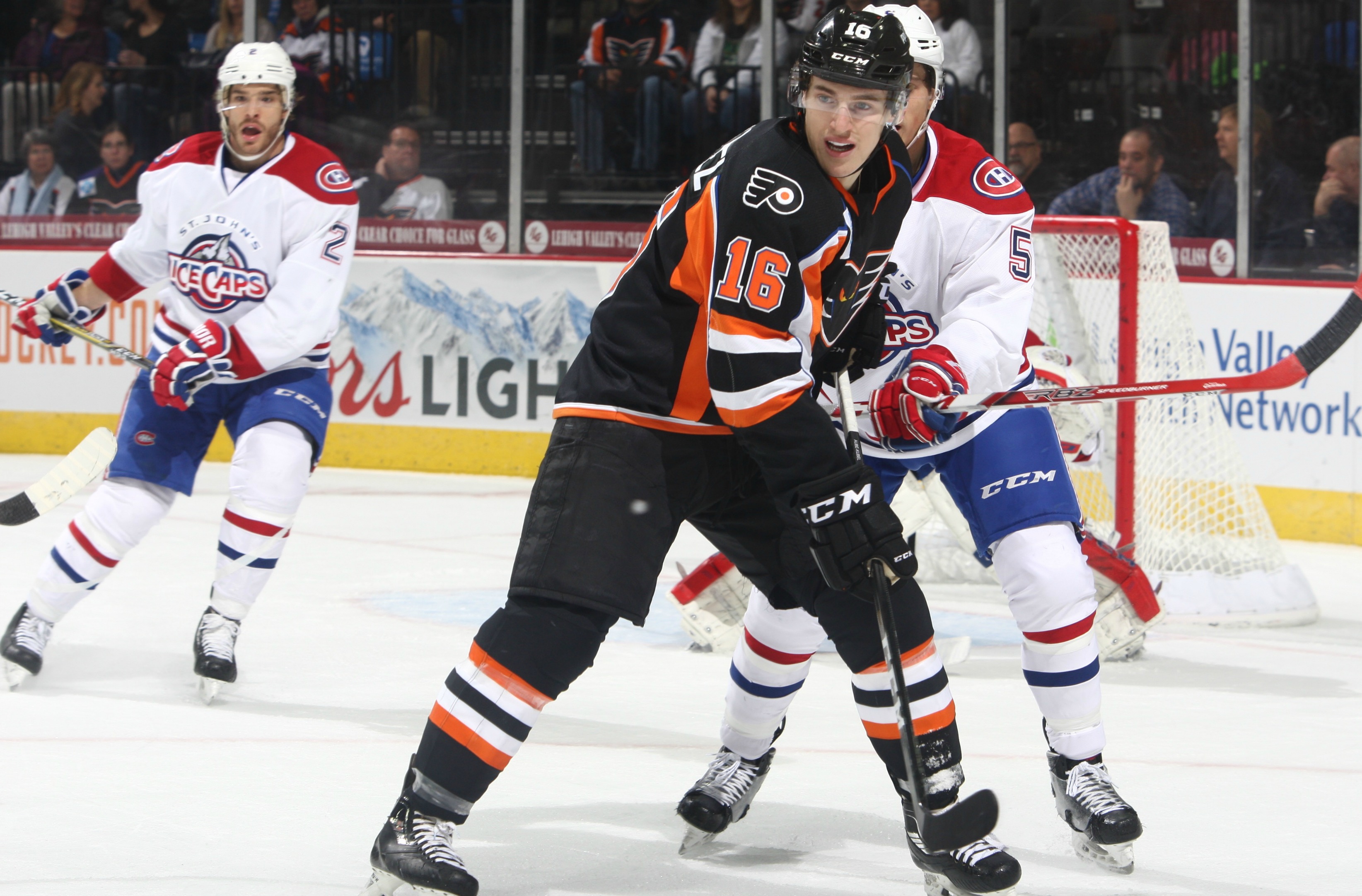 Lehigh Valley, PA – The Lehigh Valley Phantoms finished just short in their efforts for a perfect 3-0 homestand as the visiting St. John’s IceCaps rallied for an exciting 4-3 win at PPL Center on a late goal for Charles Hudon breaking a third-period tie. The Phantoms had several quality opportunities in the closing minutes for an equalizer but Yann Danis made a pair of big saves while a couple of other shots missed just wide.

Colin McDonald (18th) on the backdoor tied the game with just 7:11 left on a backdoor feed from Will O’Neill who had rotated almost up to the end-line. But Hudon’s winner in the slot with 4:33 left would hold up for the affiliates of the Montreal Canadiens. 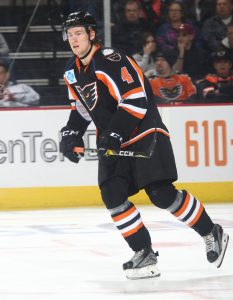 The Phantoms also received goals from Robert Hagg (5th) and Mark Zengerle (10th). But ultimately it was a five-minute stretch early in the second period in which St. John’s scored three goals that would prove to be the difference.

The weekend finale marked the 100th home game at PPL Center for the Lehigh Valley Phantoms and another sellout crowd of 8,450 filed into the still-sparkling facility at the corner of Seventh and Hamilton for the team’s ninth capacity crowd of the season and 56th all-time. And the fans were encouraged to stick around later than normal for the post-game autograph session and their opportunity to hang out with the players they cheer for so loyally.

While the Phantoms were hopeful of a comeback in the third period it was just wasn’t in the cards this time around despite the late tying goal for the team’s captain.

“We just slipped a little bit and it cost us the game but overall I thought we played pretty well,” Colin McDonald said. “They just got that last one at the end there.”

The Phantoms have pushed forth with five comeback wins in the third period this season and were hoping for a sixth. While it’s not the ideal way to go about their games, the Phantoms have proven in the past that they are capable.

“It’s a confident group in here and it doesn’t matter how many we’re down,” McDonald said. “It feels like we’re going to find a way to win. It’s a good feeling and there’s never any panic. Give a lot of credit to the guys here in the room.” 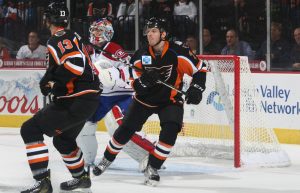 A two-point effort with a goal and assist would push Colin McDonald to a milestone 300 career points in the American Hockey League. The 32-year-old winger joined the circuit in 2007 with the Springfield Falcons and has enjoyed tours with Oklahoma City, Wilkes-Barre/Scranton, Bridgeport and Lehigh Valley encompassing 547 games in the AHL and 692 games in total as a professional.

An exciting, back-and-forth first period would stay scoreless until the closing seconds when Robert Hagg would join the rush and accept an entry-pass from Andy Miele. Hagg’s fifth of the season and second of the week on a blast in the low slot with just a few seconds remaining in the first gave the Phantoms a 1-0 lead at the first intermission.

St. John’s would surge back with a three-goal streak in a stretch of just under 5:00 early in the second period. Goals for Nikita Scherbak (11th) at 2:33, Chris Terry (16th) at 4:05 and Mark MacMillan (3rd) at 7:26 suddenly had the Phantoms on their heels as the IceCaps stormed in front to a 3-1 advantage.

Lehigh Valley would start the comeback efforts a few minutes later with Mark Zengerle chopping through a loose puck just in front of goalie Yann Danis. Zengerle’s 10th was confirmed after a brief conference by the officials debating the possibility of goaltender interference. And with 9:00 remaining in the middle frame the Phantoms were back to within a goal.

The Phantoms kept the pressure on for the third. Greg Carey and Travis Sanheim both had big opportunities that Danis was somehow able to thwart. The IceCaps barely clawed their way through a penalty kill later in the period as well but the Phantoms were still buzzing after the IceCaps were back to five skaters. Mark Zengerle settled the puck on the left boards and saucered a pass across to O’Neill at the bottom of the right circle who quickly pushed it right back across for McDonald on the backdoor. The captain’s 18th of the season would be buried past the outstretched right pad of Danis for a 3-3 tie with just 7:11 remaining.

But St. John’s would have one last response after Chris Terry used his body to secure the puck in the corner allowing him to nudge the puck along the end-boards to Nikita Scherbak whose quick drop to Hudon in the left slot would go between a couple of reaching sticks of the Phantoms and just over the left shoulder of Lyon for a bar-down game-winner with just 4:33 to go.

The Phantoms travel to first-place Wilkes-Barre/Scranton on Tuesday for a Valentine’s Day rivalry showdown against the Penguins. Tuesday’s game is also schedule to be the 700th AHL game for 33-year-old Chris Conner who had some of his best seasons in the Penguins organization.