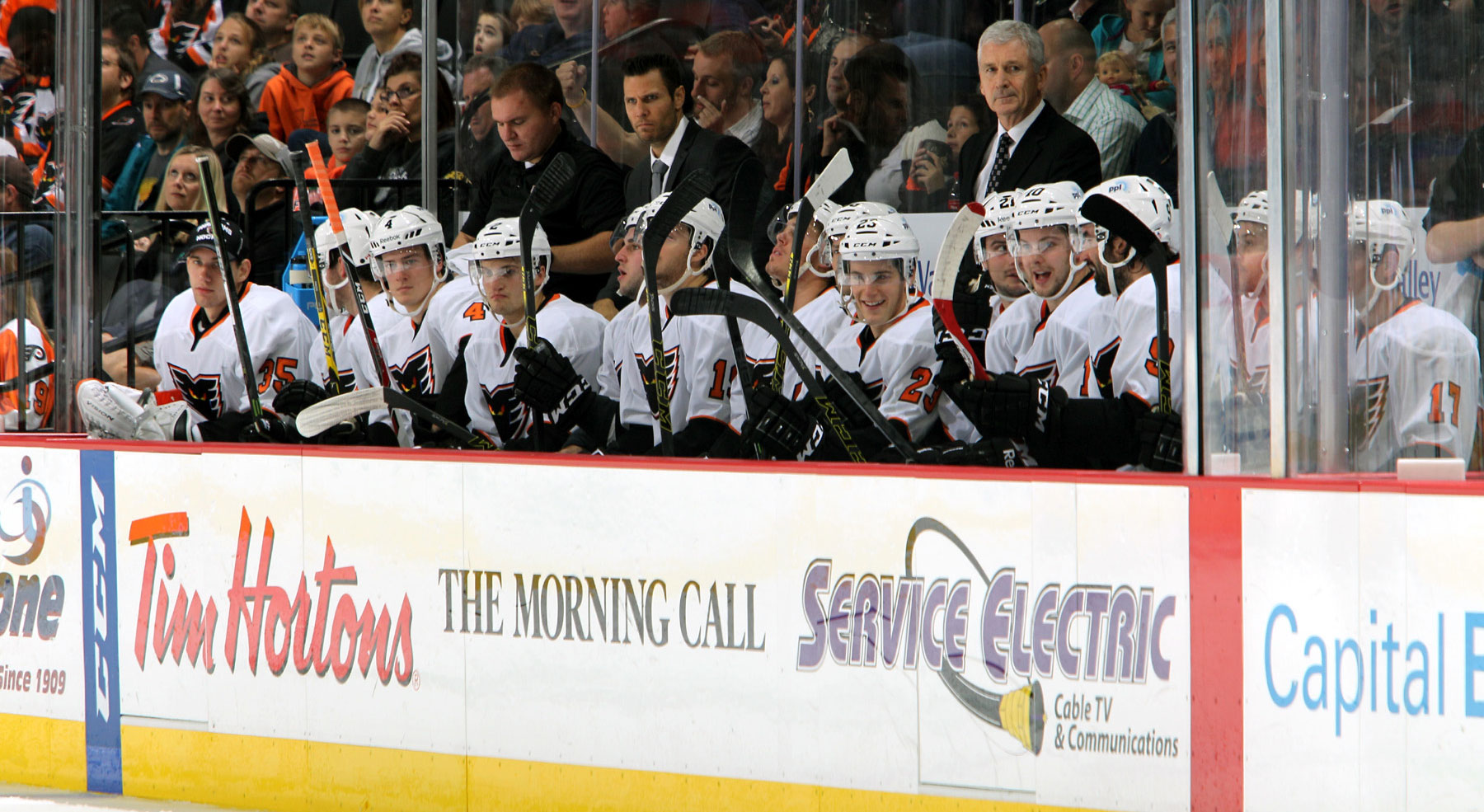 Wilkes-Barre, PA – The Lehigh Valley Phantoms’ official regular-season debut could not have gone any better. Chris VandeVelde scored twice and the Phantoms prevailed on the road at the rival Wilkes-Barre/Scranton Penguins 5-2. The first-ever game for a professional hockey team representing the Lehigh Valley featured a potent power-play attack which converted at a 3-for-5 clip.

VandeVelde scored the first and final goals for the Phantoms while Brandon Alderson, Mark Alt and Nick Cousins chipped in the others. 19-year-old rookie Robert Hagg contributed two assists from the blue-line while Alderson and Cousins also had single helpers to conclude with two-point nights.

33-year-old Rob Zepp made his first AHL start in goal in over a decade and recorded his second career win in this league in just his eighth ever game. Zepp has played in Europe for the past nine seasons including seven years with the Berlin Polar Bears in Germany. His last and only win in the AHL had come on March 30, 2003 for the Lowell Lock Monsters in a 46-save shutout against the Springfield Falcons in a 4-0 win. His second AHL win would come over 11 years later. He turned away 21 out of 23 Penguins’ drives in a steady performance between the pipes.

The first win ever for the Lehigh Valley Phantoms is also the 699th win all-time for the franchise who began as the Philadelphia Phantoms in 1996. The Phantoms now have an opportunity to achieve their milestone 700th victory next Friday night in their Opening Night Celebration at PPL Center against the Adirondack Flames in what could be a tremendous conclusion to a spectacular evening.

Tickets for the Home Opener game are on sale at PPLCenter.com or by calling 610-347-TIXX (8499) or at the Mealey’s Furniture Box Office at PPL Center. All fans in attendance will receive a commemorative Opening Night T-Shirt during the Phantoms Orange Out promotion.

This game to kick off the 2014-15 regular season was the first of 12 meetings in the renewed rivalry of the Phantoms and Penguins.

The historic first goal in Lehigh Valley Phantoms history came at 18:50 into the opening period when Chris VandeVelde converted past Penguins goalie Jeff Zatkoff on the power play after a scramble in the slot. VandeVelde is a fifth-year pro who is in his second season with the Phantoms. He had scored 10 goals for the team last year and also played in 18 games for the Philadelphia Flyers.

Lehigh Valley would boost their 1-0 lead all the way to 3-0 with back-to-back goals 81 seconds apart in the second period. Brandon Alderson intercepted an errant clearing try after some sustained Phantoms pressure in the Wilkes-Barre zone. He was able to quickly fire home his first of the season from the right circle on a rocket to the far-post blazing past Zatkoff’s blocker. The second-year pro now has seven goals in his last nine games dating back to the end of last year.

Then it was Nick Cousins trying to hit Zack Stortini in the middle but the puck ended up going through the slot and deflecting to Mark Alt instead. The former University of Minnesota defensive standout nudged the puck forward to the top of the right-circle where he was able to successfully convert on a powerful slapshot extending the lead to 3-0 and inducing Wilkes-Barre head coach John Hynes to use his timeout.

Bryan Rust barely scored for the Penguins at the end of the second period with almost no time remaining. Referee Jaime Koharski confirmed the goal via video review which was likely scored with just 0.1 seconds left in the period. The 3-1 score would remain for the bulk of the third period which included an important penalty kill for the Phantoms about midway through the frame.

Nick Cousins jumped on the rebound of his power-play drive that handcuffed Jeff Zatkoff off the shoulder successfully knocking the water bottle on his second effort to stretch the advantage to 4-1 with less than three minutes remaining.

Another power play a minute later would feature Alderson shooting from the left circle off the pads of Zatkoff to perfectly set up VandeVelde on the back-door for the rebound. With less than two minutes left, the Phantoms led 5-1.

Conor Shear of the Penguins closed the scoring with just under a minute remaining in the game for the 5-2 final margin.

Wilkes-Barre/Scranton out shot the Phantoms 23-20. Lehigh Valley was an impressive 3-for-5 on the power play while the Penguins were 0-for-2.

A few scuffles broke out at different times as both teams showed their interests in setting an early tone for a heavy-duty season-long rivalry. Lehigh Valley’s Darroll Powe dropped the gloves with Bobby Farnham in the first period. And two heavyweights squared off in the second period when the Phantoms’ Zack Stortini went at it with Wilkes-Barre’s Pierre-Luc Letourneau-Leblond. Stortini’s 299 penalty minutes with Norfolk last year led the league while Leblond was third in the AHL with 259.

Next up for the Phantoms are back-to-back games against the Adirondack Flames in a home-and-home series. Adirondack travels to PPL Center for Lehigh Valley’s Opening Night on Friday. Then the Phantoms visit their old home in Glens Falls, NY to take on the host Flames on Saturday.

The Phantoms played in Glens Falls, NY for the past five seasons as the Adirondack Phantoms while construction of PPL Center in Allentown was continuing. Their temporary stay in upstate New York was designed to give the small and loyal. old-school hockey community of the “North Country” the opportunity to prove their viability as a pro-hockey market. The arrival to Glens Falls of the new Adirondack Flames was due to the success of the Phantoms’ efforts in that community.

The Wilkes-Barre/Scranton Penguins will make their debut PPL Center appearance on Wednesday, October 29 which will be the first of six visits for them to downtown Allentown. The Phantoms next visit Mohegan Sun Arena in Wilkes-Barre on November 14.

Notes:
Taylor Leier and Jesper Pettersson both made their professional debuts. Both Phantoms newcomers are 20 years old.
Several others were making their Phantoms debuts including Rob Zepp, Andrew Gordon, Brett Hextall, Jay Rosehill and Zack Stortini.
The Phantoms are 14-5 all-time in season openers.
The Phantoms now have 699 wins all-time in the history of the franchise which is entering its 19th season.

Tickets for next Friday’s regular season home opener are on sale now. Tickets can be purchased in-person at the Mealey’s Furniture Box Office at PPL Center (7th & Hamilton), by calling 610-347-TIXX (8499) or online at pplcenter.com. The Phantoms will host an “Orange Out” next Friday where every fan in attendance will receive a free orange shirt.