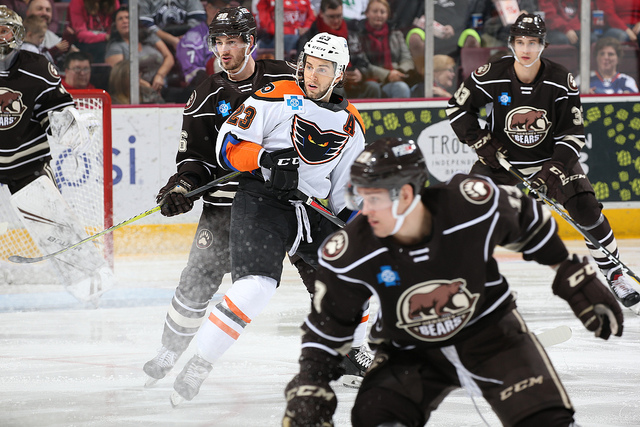 Hershey, PA – Taylor Leier (8th, 9th) scored a pair of goals and added a late assist in a three-point performance to pace the Lehigh Valley Phantoms offense but the host Hershey Bears successfully held off a late rally to emerge with a 5-4 victory on Sunday evening at Giant Center.

Connor Bunnaman (9th) and Mike Vecchione (9th) also scored for the Phantoms. Alex Lyon turned aside 18 out of 20 shots he faced after coming in as a relief-goalie just 6:36 in. Three of the four goals the Phantoms scored came from players who were missing in the lineup on Saturday night. Leier and Bunnaman both returned to action after recovering from the respective ailments. It was Taylor Leier’s second two-goal game this season, both of which have come at Giant Center. 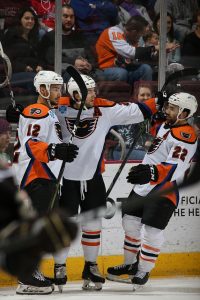 Lehigh Valley had dominated the season series 4 games to 1 and had outscored the Bears 18-3 in the previous four match-ups but an inspired Hershey squad bounced-back this weekend in the home-and-home series.

The Phantoms hit the midway mark of the season with a record of 20-15-3. The team has now played 38 games of its regular season and now has 38 more remaining beginning Wednesday night at PPL Center against the Springfield Thunderbirds.

Hershey raced out to a 2-0 lead in the opening seconds of the contest. Walker’s deflection goal of a Joey Leach shot eluded goalie Branden Komm. And then O’Brien’s shot from the corner just 1:19 in banked off the goalie’s leg and squeezed through. 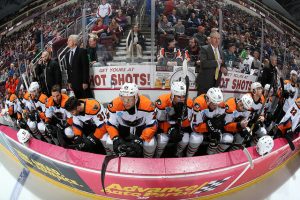 The Phantoms responded just a couple minutes later with Leier’s first of the night on the rebound of a Mark Friedman right-point shot. Leier was perfectly positioned just below the left-dot to offer his follow-up off the left leg of Vanecek. The score came just seconds after a Hershey player had returned to the ice following a Phantoms power play.

Mike Sgarbossa struck from inside the right dot off the left post to the stick-side of Komm for a 3-1 lead at 6:36 into the contest prompting interim head coach Kerry Huffman to turn to Alex Lyon.

Leier struck again for his second of the night on the rebound of a Greg Carey drive that had Leier flipping a backhander from his knees past Vanecek at 14:13 into the first thus pulling the Phantoms again to within a goal at 3-2. T.J. Brennan recorded assists on both Leier goals and continues to pace all AHL defensemen with 26 assists and 33 points.

Lyon responded well to some tough tests in the first period to keep the Phantoms within comeback distance of the Bears. His point-blank stops on Shane Gersich and Beck Malenstyn had them scratching their collective heads wondering how they didn’t snag another tally.

The Phantoms evened the score early in the second period on Connor Bunnaman’s deflection from the left of the goal-mouth following a high-slot shot-pass offer from Nicolas Aube-Kubel and less than 4:00 into the middle period it was a 3-3 tie.

Hershey re-took the lead at 14:29 into the second period with defenseman Connor Hobbs finding an open-alley up the far side to sneak over on the back-door for a perfect pass offered by Jussi Ikonen spinning from the left of the net. Hobbs’ one-timer put the Bears back in front at 4-3. 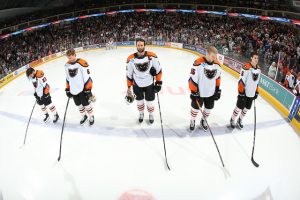 The Bears extended their lead in the third period with Brian Pinho following his own shot off the chest of Alex Lyon that he was able to tuck in behind the Phantoms goalie who attempted to stab the puck to the corner. That goal, less than two minutes into the third period, put Hershey back in front by a pair at 5-3.

Vecchione’s tally on a backhand from his knees from the left of the cage was assisted by Greg Carey and Leier with 1:26 remaining to pull the Phantoms back to within a goal at 5-4. But Lehigh Valley’s efforts for a second equalizer were thwarted by a handful of clears and blocks by Hershey’s defenders allowing the Bears to hang on.

Lehigh Valley leads the season series 4 games to 3 and the two teams will rematch on January 23rd at PPL Center in Allentown for the eighth game out of 12 in the rivalry series.

The Phantoms out shot Hershey 27-24. Lehigh Valley was 1-for-3 on the power play while holding Hershey to 0-for-2. The Phantoms penalty kill was a perfect 10-for-10 in the three games on the weekend.

The Lehigh Valley Phantoms return to action on Wednesday night against the Springfield Thunderbirds. The Phantoms will also play at home on Saturday against the Rochester Americans on Star Wars Night featuring Star Wars characters and a Star Wars themed Phantoms poster giveaway. Tickets are available at PPLCenter.com or by calling 610-224-GOAL (4625).