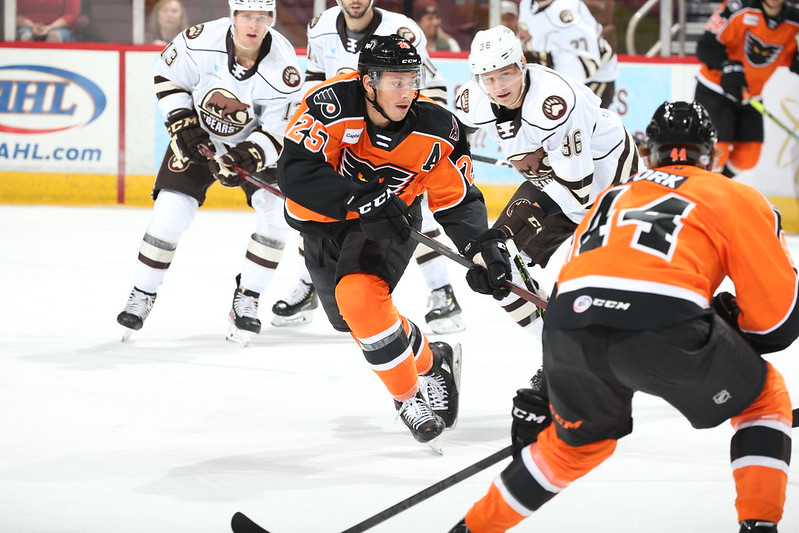 Hershey, PA – Lehigh Valley rallied late and had a chance to tie the game with a 6-on-3 attack in the last 1:20 but the Bears’ penalty kill, and goalie Zach Fucale, held tough and pushed through for a 2-1 win on Sunday evening at Giant Center. Tyson Foerster ripped a rocket from the left circle with 30 seconds left but Alex Alexeyev stepped in front of his goalie for a big block. 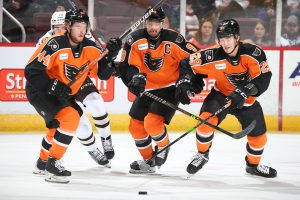 The game was a story of the Phantoms almost continously coming with one glorious chance after another. But an Isaac Ratcliffe breakaway, a Gerry Mayhew breakaway, a pass for Logan Day on the backdoor, and a Connor Bunnaman shot in the slot were not enough to get anything past Fucale in the Hershey crease. Those were just a few of the grade-A chances for the Phantoms who carried the better of the play for the bulk of the game.

The Phantoms were trailing 2-0 for much of the game on Hershey goals for Phantoms’ alum Mike Vecchione and Axel Jonsson-Fjallby. But with 2:30 left, Lehigh Valley finally got one past Fucale with Cam York dangling his way through the left circle and connecting with Mayhew on the back door who scored his first as a Phantom.

Back-to-back crosschecking and delay of game penalties provided the Phantoms the incredible opportunity to tie, or even win, the game with a rare 6-on-3 attack but the Bears penalty kill finished with a flourish in its 8-for-8 performance.

Sam Ersson made his North American pro debut and made a number of strong stops to give the Phantoms a chance to make the comeback.

Vecchione scored in the first period on the rebound of a Tobias Geisser shot that bounced off the left pad of Ersson to the popular former Phantom at the right of the net. 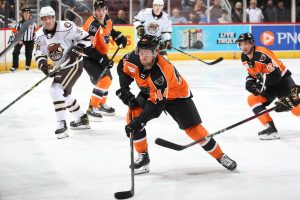 Jonsson-Fjallby scored a somewhat fluky goal midway through the second period when a drive from right-center point took a hard ricochet off the end-boards and straight back out to the right of the net where the Bears’ winger whacked at it in mid-air and through just a little gap on the short-side of Ersson. Hershey thought they had another goal right before the horn at the end of the second period on a shot by Brett Leasson that squeezed through Ersson but the ruling after video-review was that goal came after the clock hit 0:00.