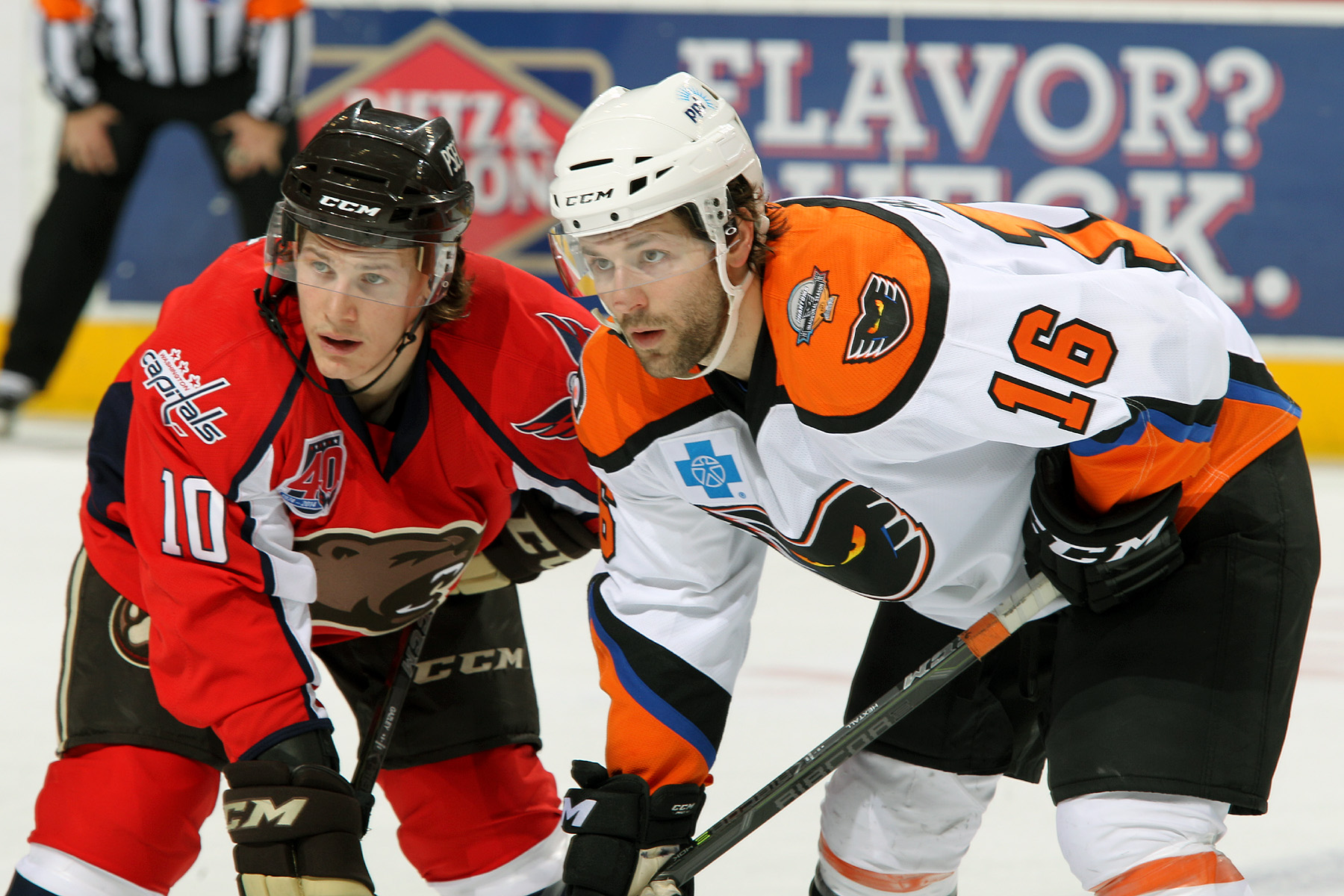 Hershey, PA – Any fan is well aware that hockey can be a funny game sometimes. The Lehigh Valley Phantoms weren’t laughing on Sunday at Giant Center when their strong, and sometimes dominating, performance led to a huge shots advantage of 37-16 but still resulted in a 2-0 loss to the Hershey Bears. Lehigh Valley outplayed the top team in the American Hockey League for much of the night but Bears goalie Philipp Grubauer stole the show, and the game, with a 37-save shutout performance.

The setback in ChocolateTown ends Lehigh Valley’s three-game road win-streak that actually began with the last time the team was in Hershey when they secured an overtime win on February 8. The Phantoms had not lost an away contest since February 7 at Binghamton. Lehigh Valley’s road record in 2015 is 8-4-0. 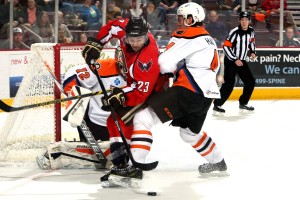 The Phantoms had 21 more shots than the Bears in the contest which is the team’s largest advantage of the season. The 16 shots allowed was easily a season-best for the Phantoms defense eclipsing their previous top mark by seven. The Phantoms had allowed 23 shots on three different occasions most recently last Saturday, February 21 vs. Hartford.

The Phantoms had not been shut out in a game since November 7 at Portland and this game was only the third blanking of the year against Lehigh Valley. Phoenix Copley of the Bears also shut out the Phantoms this season on October 26.

Some shutouts come in relatively routine situations in which the defense did their job and the goalie ended up not seeing too many dangerous situations. This would not be one of those nights. The Phantoms’ 37 shots came from all angles and included two breakaways and several other point-blank chances. Overall, it was a strong performance for Terry Murray’s team to close the weekend but somehow they just weren’t able to push any past Grubauer.

The Phantoms never backed down in this one despite the deficit and carried a huge 16-5 shot-advantage in the final period including a frenetic ending in which Grubauer made five quick-succession saves in the slot in a last-minute series of scrambles.

Phantoms veteran goalie Rob Zepp arrived back from Philadelphia in time for the game and started for Lehigh Valley for the first time since February 15 at Springfield. In the interim, Zepp had made three starts for the Flyers.

Right front the get-go, the Phantoms had a great opportunity to take control of the evening. Hershey took consecutive penalties that provided the visitors with back-to-back power plays which included 31 seconds of 5-on-3 time. But the Bears’ penalty kill is rated #1 in the league at 88.4% and came through once again with the first of six total shut-downs of Lehigh Valley’s man-advantages. 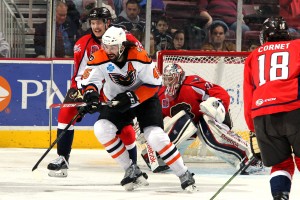 Dusitn Gazley (13th) and Stan Galiev (21st) scored the goals for the Bears who went about 18 minutes at one point (end of first period and beginning of second period) with only one shot on net. That shot appeared to be intended as a pass for Dustin Gazley way over in the right-wing corner from behind the line. But perhaps aiming for Kris Newbury on the other side in the left-circle, the fling across hit off the leg of Zepp and into the goal to give Hershey the lead at 8:24 of the second period. The Bears’ fortunate break came just as the Phantoms appeared to be on the verge of breaking Grubauer.

A turnover in the Lehigh Valley end during the opening minutes of the third led to Galiev’s tally on the backdoor on a big one-timer from the left circle after a very pretty cross-ice pass by Chris Conner.

Hershey is the top team in the league for a reason and in extending their current win streak to five games they improved to 19-2-2 since the calendar turned to 2015. The Phantoms aren’t the only team to have played a strong game at Hershey to still be denied the W at the end.

This was the tenth game of the season between the Keystone State rivals. The Bears make one appearance to PPL Center on April 14. The Phantoms last away game of the regular season will take place at Giant Center on April 18. This was the 194th meeting ever between the long-time rivals. In their 19-year history, the Phantoms have played more games against the Hershey Bears than any other team.

Lehigh Valley was 0-for-6 on the power play while limiting the Bears to 0-for-4. This was the 55th game of the season for Lehigh Valley who have just 21 games remaining on the 2014-15 docket. 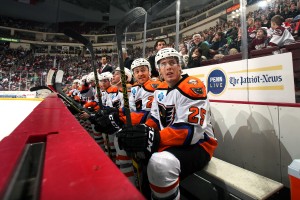 The Phantoms return to PPL Center for a pair of games next weekend. Lehigh Valley hosts the New York Islanders’ affiliate, the Bridgeport Sound Tigers, on Friday, March 6th on another Free Shirt Friday with all fans in attendance receiving a Military Appreciation Phantoms shirt. Then, Lehigh Valley welcomes the Portland Pirates, AHL affiliate of the Arizona Coyotes, on Saturday, March 7th. Saturday’s game is another Legends Night as all fans in attendance will receive a FREE Collector’s Edition Poster spotlighting 2005 Calder Cup Champion and AHL Hall of Fame defenseman John Slaney who is currently an assistant coach for Portland.