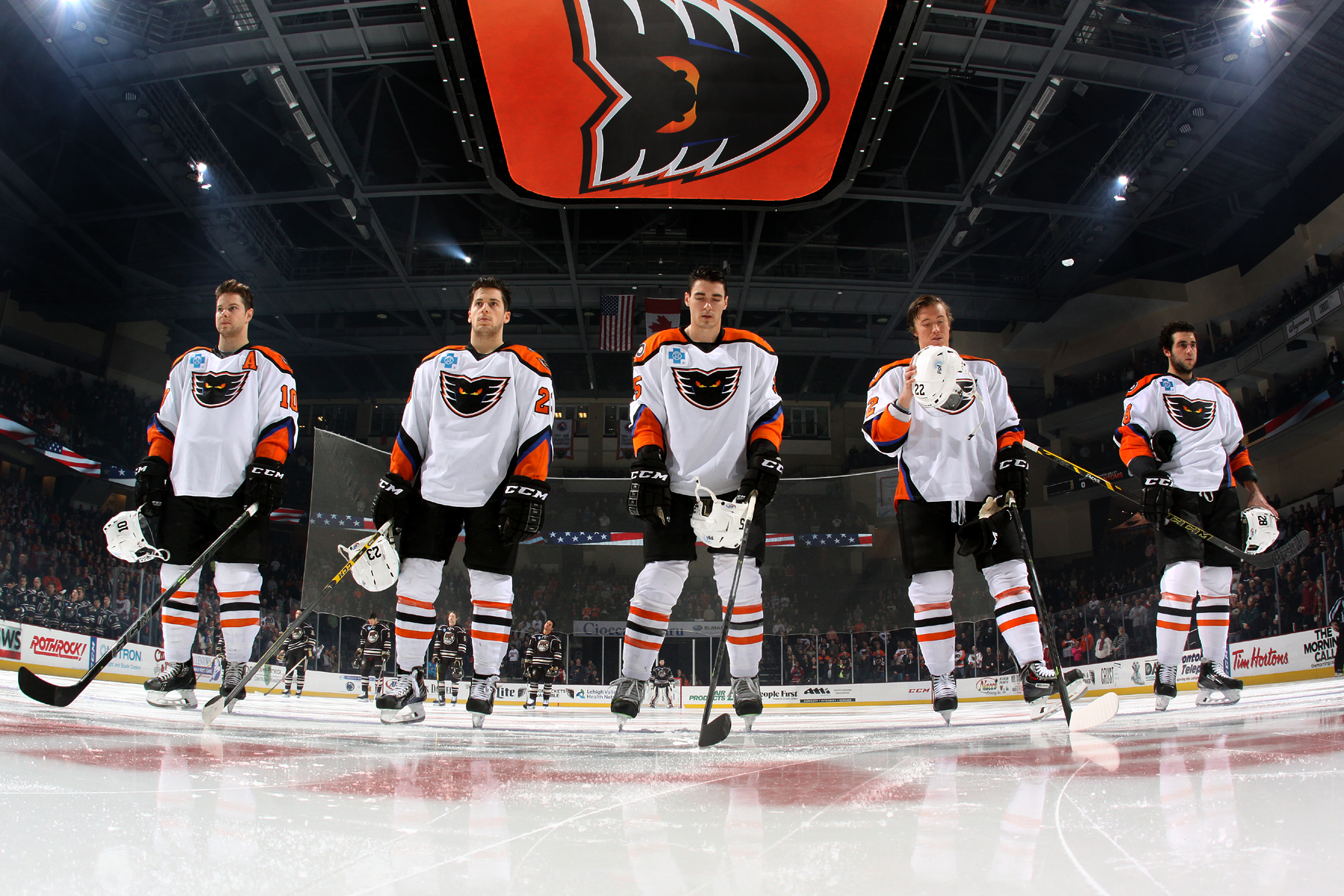 Phantoms Win Thriller Before Yet Another Sellout Crowd!

Lehigh Valley, PA – Blair Jones achieved the first-ever Gordie Howe Hat Trick in Lehigh Valley Phantoms history scoring two goals with one assist and one fight to lead a thrilling 4-3 victory over the Norfolk Admirals on Saturday night at PPL Center. 8,522 fans packed into the spectacular, new entertainment venue in Center City Allentown to mark the team’s fourth Standing Room Only Sellout in 10 home games as well as their sixth gathering of 8,000 or more.

The large and rambunctious crowds at PPL Center have provided an invaluable boost for the players who have lost in regulation only twice in 10 home contests. The Phantoms now boast an impressive mark of 6-2-2 in their new home. And in an ultra-busy stretch of six home games in the past 15 days (from November 15 through 29) the Phantoms were 4-1-1 thus defending their home ice by securing nine out of a possible 12 standings points. Lehigh Valley improved to 9-8-2 overall.

Brandon Manning contributed three straight assists on consecutive goals just 2:57 apart late in the second period to impressively extend his point-streak to eight games. Taylor scored a power-play goal for the third straight game to take the team lead in scoring with his seventh lamplighter of the season. And Anthony Stolarz made several tremendous stops to thwart the relentless Norfolk comeback efforts.

To top it off, the victory came against a goalie who previously patrolled the crease for the Phantoms a season ago. Veteran Yann Danis was teammates last year with Brandon Manning, Nick Cousins, Mark Alt and the rest of the returning Phantoms players.

For Zack Stortini and Blair Jones, the victory may have felt especially sweet; Both were previously skaters for the Norfolk Admirals.

“It’s huge. You know, we find a way to make it interesting,” Brandon Manning said of the heart-stopping victory. “But at the end of the night, the two points is all that matters. I think this is a big one for us with the week off (between games) and three-in-three next weekend.”

Saturday’s contest against the AHL affiliate of the Anaheim Ducks began with a tremendous pace and included a pair of glorious Lehigh Valley scoring opportunities right out of the gate. First, a right-wing slap shot in the opening minute produced a juicy rebound in the slot for Robert Hagg who was denied by an acrobatic pad by save by Norfolk netminder Yann Danis. Then, just half a minute later, the Phantoms persistence paid off as Austin Fyten won a battle for a loose puck on the rebound of his own shot before sending in his second goal of the season. Some fans were still settling into their seats as the crowd roared for a 1-0 lead just 66 seconds into the contest.

Jason Akeson earned the primary assist on the Fyten tally with a perfectly executed saucer pass from the left wing while Steven Delisle grabbed the secondary helper on the even strength strike netted just 1:06 into the contest. Akeson’s assist was his first point since re-joining the Lehigh Valley Phantoms and his 173rd all-time with the franchise which is tied for eighth all-time with Jon Matsumoto. Akeson’s 115th assist with the Phantoms rates seventh all-time.

Akeson joined the Phantoms on Friday evening after playing 12 games for the Philadelphia Flyers at the start of the season. The 24-year-old winger paced the Phantoms in scoring in each of the last three seasons.

Norfolk created its first quality scoring chance of the night a little over four minutes later when William Karlsson unleashed a heavy one-timer from the slot but Phantoms goaltender Anthony Stolarz was equal to the task by swallowing up the cannonating drive without allowing a rebound.

Less than nine minutes later, Karlsson and the Admirals had a similar opportunity while on the power play and were just able to solve Stolarz over his right shoulder. The man-advantage marker came 13:38 into the first period and was Karlsson’s first goal of the season. Max Friberg earned the only assist on the power play conversion.

Phantoms fans were back on their feet in no time as they were treated to a pair of fights less than a minute later. First, the AHL’s reigning penalty minute leader Zack Stortini (who had 299 penalty minutes with Norfolk last season) dropped the gloves with Norfolk’s Jared Nightingale only 11 seconds after the Admirals had leveled the score. Then, Jones tussled with Norfolk’s Chris Wagner who took exception to a jolt Jones had applied along the half boards.

The scoring resumed just under seven minutes into the second period when Norfolk would take a 2-1 lead on a Joseph Cramarossa goal following a John Kurtz steal of the puck from Stolarz behind the Phantoms net.

The Admirals’ advantage was short lived though as Lehigh Valley was able to even the game and re-establish its lead thanks to a three-goal outburst in less than three minutes.

Blair Jones cranked up a rising laser from the blue-line sneaking in just under the cross-bar for his first goal as a Phantom.

Just two minutes later, it was Taylor Leier scoring from the base of the right-circle during a 5-on-3 power-play with a little bit of lady luck on his side. His shot attempt was met stick-on-stick by Max Friburg but the puck fluttered in the air and tumbled perfectly over the goaltender and through the desperation swing of Dave Steckel in the crease.

“I’ve said this all along, every game I’ve felt more and more comfortable,” the 20-year-old rookie Leier said of his recent scoring surge. “The ball is just kind of rolling a bit I guess so it’s a good feeling to get some results.”

Jones assisted on the Leier goal to culminate the Gordie Howe Hat Trick having already notched the goal and fight earlier. Leier was pleased to help Jones achieve the milestone.

“Yeah, we did (know). We gave him a couple taps.” Leier said. “That’s pretty impressive. Not a lot of guys can do that so you got to give him credit.”

Following Leier’s goal it was just another 49 seconds later for the Phantoms to extend their advantage to 4-2 witha valuable insurance goal with Blair Jones this time blasting a one-timer from the left circle on a fine give across by Brandon Manning. Jones’ drive also appeared to hit off a shoulder or chest of a Norfolk defenseman before finding its way through Danis.

Manning had assisted on all three of the Lehigh Valley goals in the second period and the Phantoms took a 4-2 advantage to the second intermission.

After 15 shots cranked up in the second period by the visiting Admirals, Stolarz would face 13 more quality drives in the third. The only one sneaking past him was on a steal of the puck in the Phantoms zone by Brandon Yip with William Karlsson on the backdoor successfully burying his second goal of the game. The tally at 5:48 of the third had narrowed the Phantoms’ advantage to 4-3 and from there it was a breathless excitement all the way to the finish with Stolarz cutting off each Admirals’ effort.

Lehigh Valley was not without their chances to extend their lead in the third period. Nick Cousins and Brandon Manning both had breakaways in the third period that were denied off the right-leg of their former teammate, Yann Danis.

Lehigh Valley and Norfolk are East Division rivals and will meet seven more times this season including another holiday weekend engagement at PPL Center when Norfolk returns on December 27.

The Phantoms are back in action next Friday evening when the team heads to Wilkes-Barre/Scranton for its fourth showdown of the year with the Penguins. Lehigh Valley is 1-1-1 in three prior tilts against the Baby Pens.

The Phantoms return to PPL Center next Saturday, December 6th when the Phantoms host the Bridgeport Sound Tigers, the AHL affiliate of the New York Islanders, for the first time this season. History will be made next Saturday when the Phantoms host their first Teddy Bear Toss in the Lehigh Valley. Fans are encouraged to bring new or gently used teddy bears to the game and throw them onto the ice when the Phantoms score their first goal. All bears will then be donated to Valley Youth House. It will also be Legends Night at PPL Center as two-time Stanley Cup champion and the first head coach in Phantoms history Bill Barber will be on hand to meet fans and sign autographs. All fans in attendance next Saturday will receive a FREE Collector’s Edition Poster spotlighting Barber.

Tickets for next Saturday’s contest are available now at the Mealey’s Furniture Box Office at PPL Center (701 Hamilton), by calling 610-347-TIXX (8499) or online at pplcenter.com.