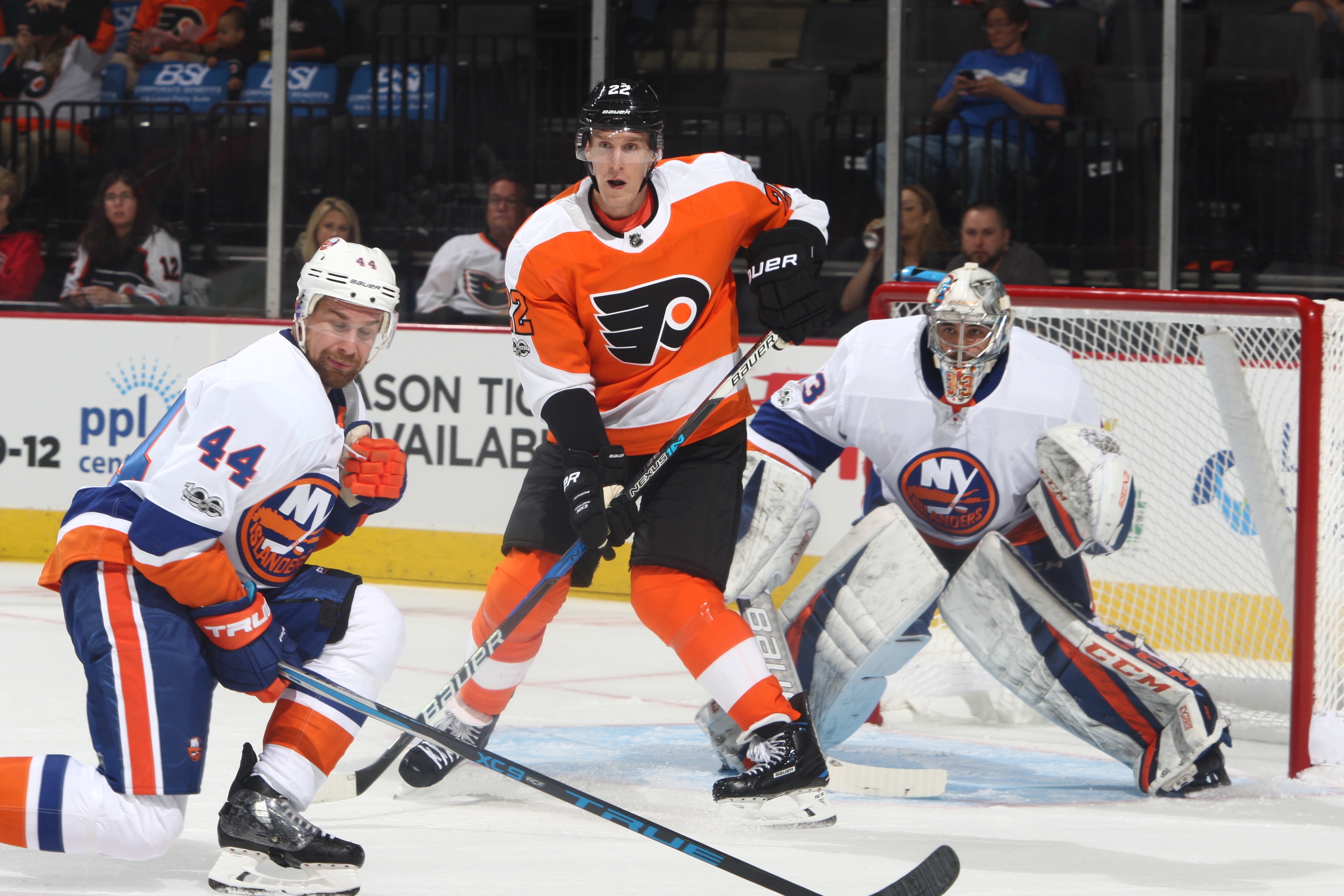 Taylor Leier Scores Twice in “Flyers in the Valley” Victory

Lehigh Valley, PA – The return of “Flyers in the Valley” was a triumph once again. Taylor Leier struck twice on the power play in the second period and Shayne Gostisbehere scored the overtime winner as the Flyers prevailed over the visiting New York Islanders 3-2 on Wednesday night before an exuberant crowd welcoming the beginning of hockey season at the state-of-the-art PPL Center.

Gostisbehere’s backdoor conversion on a cross-ice pass from highly touted rookie Nolan Patrick just 53 seconds into the 3-on-3 session capped an exciting night of NHL action in Center City Allentown. It was The Ghost’s second-ever goal at PPL Center. The Union College product scored his first career professional goal as a member of the Lehigh Valley Phantoms on October 28, 2015 against the St. John’s IceCaps. This was Gostisbehere’s first game back at PPL Center since his call-up to the Flyers in November, 2015.

“Weise back-checked hard on Ho-Sang there in the corner,” Gostisbehere said of the winning play. “And he poked it up to Nolan and he made an NHL pass there. That was unbelievable. I mean he kind of faked me out too. Thankfully I got it and it went in.”

While Nolan Patrick was complimented by Gostisbehere, the #2 overall selection in last summer’s draft was slightly more critical and humble of his own play.

“I actually got caught a little long there. I was trying to make a change,” said the 19-year-old Patrick in his first game since his birthday 24 hours earlier. “But my guy kind of curled to the far end of the rink so I had to stay out. They just made a turnover and then Ghost jumped up and I saw him and it was a great finish by him.” 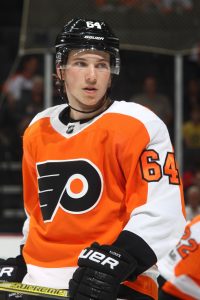 Taylor Leier has been one of the most popular players for the Lehigh Valley Phantoms in the first three seasons of the franchise in downtown Allentown and he displayed his comfort level in the building he knows so well even if he was wearing a different jersey number than his better known 23. But Leier didn’t seem bothered by his orange uniform that sported his preseason 58 assignment and actually seemed to thrive with it.

In what has now become an annual tradition, hockey fans from all across the community arrived en masse at PPL Center for the season’s kickoff event. It is the third season for the Lehigh Valley to host an NHL game and the Philadelphia Flyers improved their record to 3-0 in their Allentown engagements. PPL Center is one of only three American Hockey League arenas to host an NHL game this year (Bridgeport and Tucson are the others).

It’s a special opportunity for the area fans to see the best of the best. And naturally many of the prospects and young talents who will don the Phantoms sweater in the upcoming days will arrive to Allentown with hopes of joining the 19 other players who have made the advancement from Lehigh Valley to Philadelphia in the first three seasons of the American Hockey League in this building.

Leland Irving recorded the win after entering the game in the third period. Michal Neuvirth started and played the first 40 minutes for Philadelphia. Christopher Gibson went the distance for the Islanders and was tagged with the overtime loss. 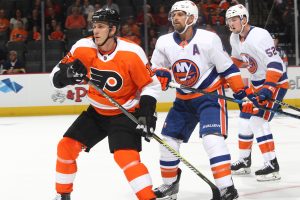 The game featured an enjoyable mix of veterans as well as highly hyped prospects such as Nolan Patrick, German Rubtsov and Oskar Lindblom while also showcasing some familiar faces to Phantoms fans in the form of young talents Samuel Morin, Robert Hagg, Travis Sanheim and Taylor Leier among others.

A disjointed first period saw more odd-man hockey than even-strength as the officials jumped right in to enforce the league’s directive of more strictly enforced slashing and face-off violation penalties. The Islanders had four power plays in the first period while the Flyers had three.

Young talent Mathew Barzal opened the scoring for the Islanders in the opening minutes of the game following consecutive slashing infractions against the Flyers. His 5-on-3 tally at 2:24 on the backdoor at the base of the left-circle was a perfect sharp-angle strike and was assisted by fellow first-rounders Josh Ho-Sang and Ryan Pulock. The Islanders had the edge in play in the opening frame and the Flyers were a bit sluggish to find their stride after the initial penalty difficulties.

Taylor Leier has played 192 career games with the Lehigh Valley Phantoms in his three professional seasons and looked to make a statement to win a spot on the Flyers Opening Night roster with a pair of middle-stanza lamplighters.

“Last year I felt it when I was up,” Leier said in referencing his 10 games in the NHL with the Flyers a season ago. “I felt like a belonged. So this year I’m coming in even more confident. I’m willing to accept any role and any challenge and I want to help the Flyers win a Stanley Cup.”

His first goal came in the opening seconds of the frame when he and Dale Weise hooked up on the power-play rush. Leier buried the backdoor feed at 36 ticks into the second to even the score at 1-1.

Leier almost did it again just a minute later on a long, stretch-pass by Travis Sanheim that connected for an opportunity up the left wing. Leier was just inside the left dot when he saw daylight over the near shoulder of Christopher Gibson but his shot just missed the mark on his attempt to score a second goal less than two minutes into the second period. 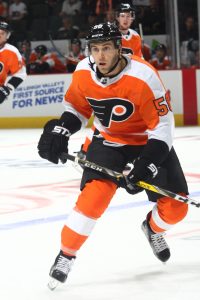 He wouldn’t be denied later on though. His more traditional style power play goal came on a normal looking set up with the Flyers firmly established in the zone and moving the puck around quickly. Oskar Lindblom’s nifty touch pass back to Gostisbehere was subsequently slid over to Leier who paused for a tick before snapping a wrister from the top of the right circle directly over the left shoulder of the screened Gibson. Dale Weise assisted on two of the Phantoms goals on the evening and practically did on this one as well with his traffic in front helping create the opportunity for his teammate.

The Flyers appeared as though they were going to emerge with a regulation victory but the Islanders surged back after pulling Gibson for an extra attacker. Brock Nelson on the left wing found Anders Lee speeding towards the middle on a timing play where the Islanders leading goal scorer from a year ago was successful in notching the backhander past the right leg of Irving in the one-on-one look.

Irving made a save early in overtime and the Islanders appeared to have the puck again but Weise worked hard on the back-check to force the puck free and send Patrick flying up the left-wing with Gostisbehere on the back door for the game-winner.

Nolan Patrick was the second overall selection in the 2017 NHL Draft. Patrick is coming off an impressive career with the Brandon Wheat Kings of the Western Hockey League (WHL) where he compiled 92 goals, 113 assists and 205 total points in just 163 total games. He finished tied for third among all WHL skaters in assists (61) and was fifth in overall scoring (102 points) during the 2015-16 season and averaged an impressive 1.39 points per-game last year (46 points in 33 games). 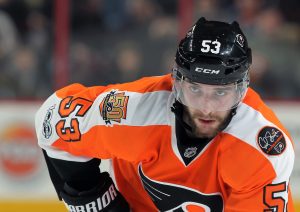