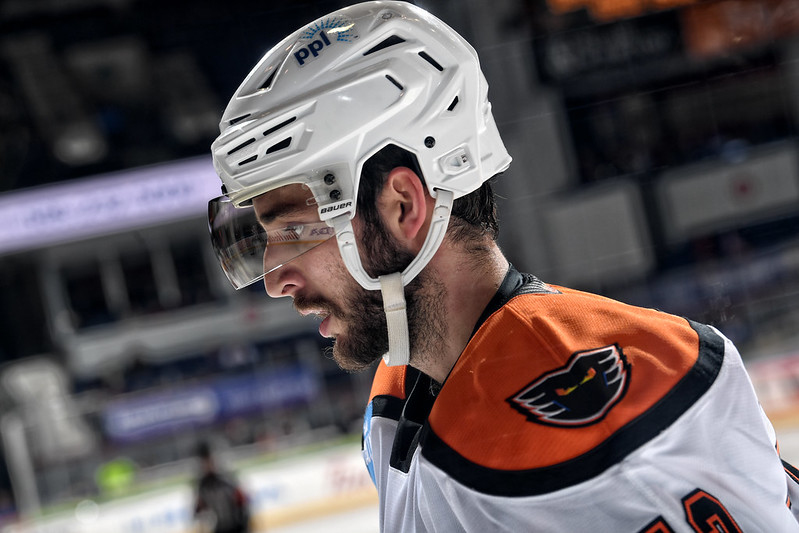 Rochester, N.Y. – Flyers defenseman Shayne Gostisbehere suited up for Phantoms for the first time in over four years joining the team on a conditioning loan while Lehigh Valley battled back from a late deficit to force overtime in a 3-2 loss at the Rochester Americans on Friday night. Lehigh Valley earned a standings point in taking just their second overtime loss of the year.

Misha Vorobyev (11th) scored an extra-attacker with just 32 seconds remaining to knot the game at 2-2 just 20 seconds after the Amerks had taken a 2-1 lead on Sean Malone’s conversion with just 51.1 seconds remaining. Gostisbehere never got a chance to score an overtime winner as Rochester finished the game in the opening minute of the extra period on a close-range goal by defenseman Jaycob Bryson (2nd) that capped a wild finish. 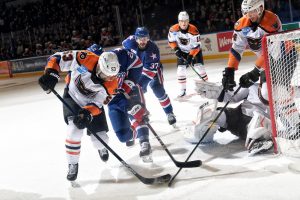 “Ghost” had not played for the Phantoms since November 13, 2015 when he and teammate Taylor Leier were recalled to the Philadelphia Flyers together. Coincidentally and incredibly, Gostisbehere’s return to the Phantoms came against former Phantoms fan-favorite Taylor Leier who is now with Rochester. It was the 22nd career game in a Phantoms sweater for Gostisbehere who has played over 300 games for the Flyers with 199 career points. In the Phantoms inaugural Opening Night on October 17, 2014, Gostisbehere assisted on the winning overtime goal at PPL Center in the first official professional hockey game ever played in Allentown.

Rochester (30-17-7) opened the scoring less than four minutes into the contest on C.J. Smith’s backdoor blast on the power play that barely squeaked through Alex Lyon who initially appeared to have made a spectacular save sprawling to his left.

Moments later, Maksim Sushko was robbed on the backdoor on a 3-on-2 rush when Americans’ goalie Andrew Hammond pulled the splits and came up with a fantastic left pad save to deny the Phantoms rookie winger who had been set-up nicely by Morgan Frost.

The Phantoms picked up their play in the second period but were still unable to break through against Hammond. 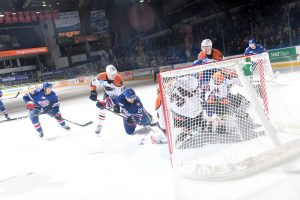 Greg Carey cranked a power-play shot off the post early in the third on a set-up by Gostisehere.

A couple minutes later Kurtis Gabriel (4th) buried his opportunity from the slot after former Rochester American, Kyle Criscuolo, raced all the way down ice and successfully retrieved his own chip to the end-boards on a very strong and determined effort for the assist.

Lehigh Valley (23-24-8) had back-to-back power plays in the third that included 35 seconds of a 5-on-3 but Rochester barely held on to keep the game tied. Morgan Frost had induced Hammond down to the ice but his shot from the right of the cage found the glove of Hammond who tossed up his arm while laying on his hip.

The wild, back-and-forth finish saw three goals in just over a minute beginning with Malone’s goal that gave Rochester a 2-1 lead with just 51.1 seconds left in regulation followed by Vorobyev’s strike from the left of the cage set up by Andy Andreoff and Morgan Frost with only 32 seconds remaining to tie the game yet again at 2-2. Jaycob Bryson’s winning goal, set up by Casey Mittlestadt, came just 35 seconds into overtime.

The Phantoms are 5-2 in overtimes this year. Lehigh Valley has points in four of its last five away games at 3-1-1 and also in seven of its last nine contests overall at 5-2-2. 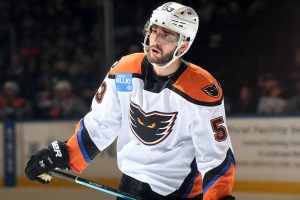 Rochester out shot the Phantoms 35-31. Lehigh Valley was 0-for-5 on the power play while the Americans were 1-for-3.

The Phantoms conclude their four-game road-trip on Saturday night at the Syracuse Crunch. The Phantoms return to PPL Center next weekend for a pair of games against the Charlotte Checkers on “Miracle on Ice” Weekend featuring a tribute to the 40th Anniversary of the USA Olympic triumph at Lake Placid. Tickets are available for both games for $19.80.

NEXT TIME OUT: The Phantoms conclude their four-game road trip at Syracuse on Saturday night. They will return home on February 28 for a weekend series against the Charlotte Checkers as the team celebrates the 40th Anniversary of the 1980 Miracle on Ice.