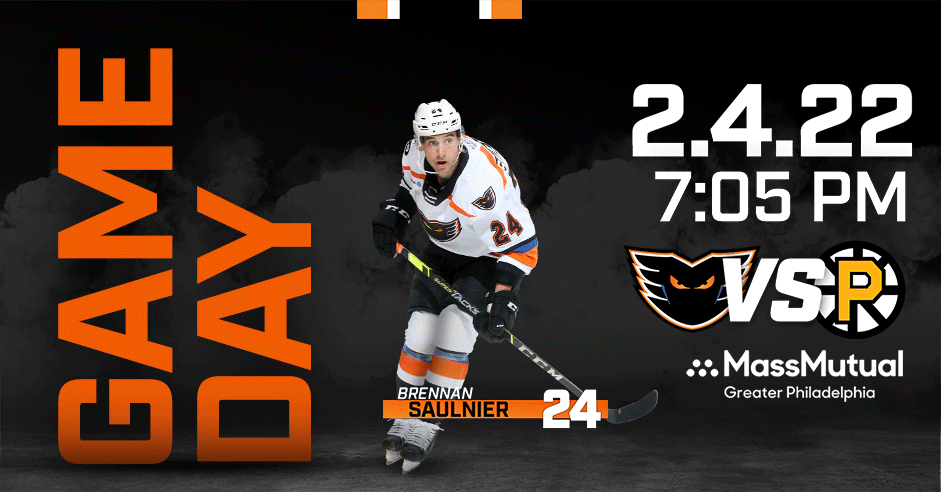 TONIGHT:
It’s a GAMEDAY at PPL Center presented by MassMutual as the Lehigh Valley Phantoms play host to the Providene Bruins, AHL affiliate of the Boston Bruins. Lehigh Valley (14-15-8) looks to climb back to the .500 mark. The Phantoms have points in 14 of their last 18 games at 11-4-3. The P-Bruins (17-11-6) have gone winless in three straight and have dipped to fourth in the Atlantic Division.

LAST TIME:
Nick Lappin scored his third of the season and the fourth-liners drove the Phantoms’ attack but Lehigh Valley came up short in a morning game at the Bridgeport Islanders in a 4-1 loss on Wednesday.

WELCOME BACK!
Morgan Frost, Isaac Ratcliffe and Cam York have been returned to the Phantoms as the Philadelphia Flyers have hit the NHL All-Star Break. Frost’s last game with the Phantoms was November 20. He was leading the team in scoring (3-12-15) at the time of his recall. Ratcliffe is coming off his NHL deut this past Saturday in an overtime win for the Flyers against the Los Angeles Kings. Cam York’s most recent game with the Phantoms was December 21. He scored his first NHL goal on January 15 against the New York Rangers.

PROVIDENCE BRUINS:
Former Hartford Wolf Pack Steven Fogarty (8-15-23) leads the Bruins in scoring. Zach Senyshyn (11-9-20) had a hat trick against the Phantoms in November. Veteran goalie Troy Grosenick (8-2-1, 2.28, .917) is fifth in the AHL in GAA. Lehigh Valley lost at Providence 6-3 in November in the only previous matchup. This is Game 2 out of 6 in the season series.

NEWS AND NOTES:
– Cal O’Reilly’s two shorthanded goals on Sunday tied a franchise record. The only other player to accomplish the feat was Jason Akeson who scored two shorthanded goals for the Adirondack Phantoms on March 21, 2014 at the Utica Comets.
– Lehigh Valley has gone 11-4-3 in its last 18 games after a beginning that saw just three wins in the first 19 games at 3-11-5.
– The Phantoms have points in 7 of their last 8 home games going 5-1-2 in that stretch.
– Linus Sandin had his three-game point streak (1-3-4) snapped on Wednesday at Bridgeport.
– Cal O’Reilly has 15 points (5-10-15) in his last 12 games including five multi-point games in that stretch.
– Defenseman Adam Clendening has 12 points (2-10-12) in his last 13 games including four multi-point games in the last nine.
– 11 Phantoms players this season have also suited up for the Philadelphia Flyers: Wade Allison, Connor Bunnaman, Jackson Cates, Morgan Frost, Gerry Mayhew, Isaac Ratcliffe, Linus Sandin, Felix Sandstrom, Max Willman, Cam York, Egor Zamula

UP NEXT:
The Phantoms travel to Hartford (21-12-5) for a rematch against the first-place Wolf Pack on Saturday at 5:00 p.m.
The Phantoms return to PPL Center on Tuesday, February 8 hosting the Belleville Senators