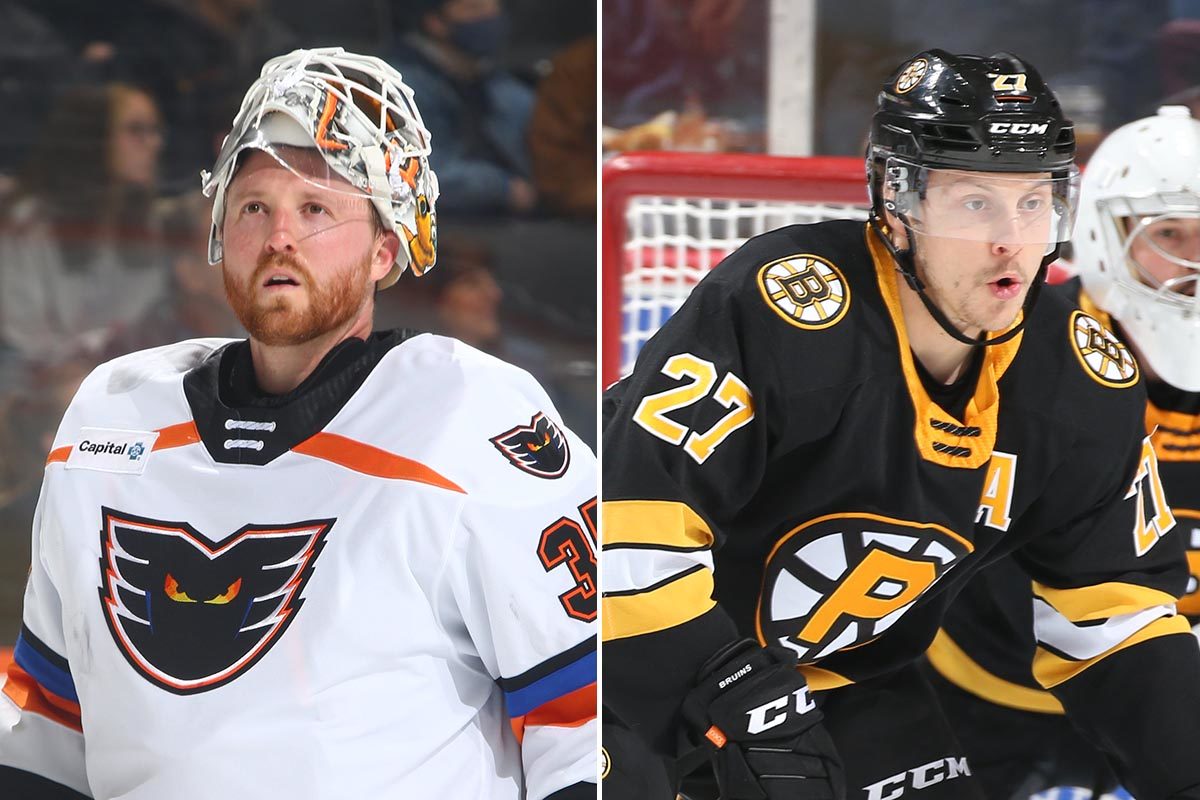 The unchecked excitement from a pair of American Hockey League’s newest Olympians came through loud and clear in separate interviews this week.

AHL fans know what goaltender Pat Nagle and defenseman Aaron Ness can do. Soon the rest of the U.S. hockey fan base can see Nagle and Ness when the two represent the United States at the 2022 Winter Olympics in Beijing. The 17-day event begins this Friday with the Opening Ceremony at Beijing National Stadium; the men’s hockey tournament opens Feb. 9.

“I don’t think anything prepares you for the actual phone call, just the excitement, the butterflies, you name it,” Nagle said of being notified of his selection to the U.S. club.

Said Ness, “[It was a] crazy call to get. It was a lot of emotions. I think you’re so excited, but it’s more of a shock. I think right away you don’t really understand the gravity of the situation ― you’re going to go play in the Olympics. So it was an incredible call to get, and [I am] just super excited to be part of it.”

Before Nagle and Ness head off to Los Angeles for a short orientation period with Team USA this week, they each put together strong going-away performances for AHL fans.

Nagle earned the AHL shutout of his 13-year pro career on Saturday night when took the Lehigh Valley Phantoms into the XL Center and shut down the Hartford Wolf Pack, 4-0, making 26 saves. Nagle has gone 7-0-3 for the resurgent Phantoms this season and has a 2.37 goals-against average and a .911 save percentage working in a support role for Philadelphia Flyers prospect Felix Sandstrom.

Ness, who has nine assists in 31 appearances for the Providence Bruins this season, logged another typically steady performance in his final game before the Olympics this past Tuesday, anchoring the left side of a pairing with rookie partner Andrew Peski in a road loss to the Utica Comets.

Ness put together a career season in 2018-19 with the Hershey Bears, leading all league defensemen in assists (50) and points (55) to earn a spot on the AHL Second All-Star Team and help engineer a midseason turnaround that eventually carried Hershey to the second round of the Calder Cup Playoffs. Last season Ness spent most of the season in the NHL on taxi-squad duty with the Arizona Coyotes before signing an AHL deal with Providence in training camp.

Team USA head coach David Quinn, who guided the AHL’s Lake Erie Monsters for three seasons between 2009 and 2012, and his staff will count heavily on Ness to guide a young American blue line that includes four collegians along with two other former P-Bruins in Steven Kampfer and David Warsofsky to offset some of that youth.

While Ness has worn American colors at the IIHF World Under-18 Championship in Russia as a 17-year-old, Nagle’s trip to the Olympics will be his first international selection. But both players grew up in strong U.S. hockey environments: Nagle comes from Bloomfield Township, Mich., and played four NCAA seasons at Ferris State, while Ness, born in Bemidji, Minn., grew up in the classically Minnesota hockey hotbed of Roseau, often sleeping – and playing shinny – overnights with teammates at the rink.

Team USA opens Feb. 10 against host China, followed two days later by a showdown with Canada followed by a meeting with Germany on Feb. 13 to end the round-robin portion of the tournament. Team Canada will feature Utica Comets defenseman Tyler Wotherspoon along with forwards Adam Cracknell (Bakersfield Condors), Josh Ho-Sang (Toronto Marlies), and long-time NHL center Eric Staal, who had a three-game run with the Iowa Wild earlier this month. Both North American clubs will also feature a deep pool of AHL alumni now playing in Europe.

“It’s the Olympics, right?” Ness asked aloud. “It’s a big stage. So I think the whole team’s expecting big things, and we’re going over there to win a medal. I think that’s obviously the mindset, and it’s going to be really exciting.

“A stage that big, I don’t think you can really put your mind around it until you really get over there, really start to experience it, get on the ice, start playing with the guys.”

Below Nagle and Ness provide insight on their Olympic preparation so far and much more:

ON HOW THE SELECTION PROCESS UNFOLDED

Nagle: “Initially, there were just some reports. They started mentioning guys and stuff like that, but I didn’t really think much of it, to be honest. And then… all of a sudden, your name starts to get thrown around a little bit. I still was just kind of like, ‘Oh, wow, that’s a nice compliment just to be in a long list of names. Okay, who knows.’

“Once our staff here spoke to me a couple times and gave me a little intuition that they had received some phone calls and that some people had been watching and checking in on me, that it actually might be a possibility, then I still was just, I guess, maybe a little naive about it, because you just don’t really think much into it.

“It happened pretty quick from going and just kind of being in the dark and not hearing much really. Most of it stayed behind the scenes, to be honest, which was nice [so] that I can focus on hockey here and not really have too much outside noise.”

Ness: “It was pretty fast-paced. I got a call from USA Hockey. I called my family right away. I told my wife [Samantha]. She’s with me, and I don’t think either of us really understood the gravity of the situation.

“I called my family, told all of them, and [it was] kind of the same thing. Everyone was very excited, but I don’t think [one can] understand — it’s the Olympics.

“So it took a couple days to sink in.”

ON BEING AWAY FROM THE AHL TEAM

Nagle: “I talked to our head coach [Ian Laperriere]. They were just excited that I might have the opportunity. They were great about it, which was awesome, because you’re leaving your team for a couple of weeks, which is never easy. We’ve really been playing well here in the last month or two, so it’s been a lot of fun.

“But they were great.”

ON WEARING THE US COLORS

Nagle: “It’s awesome. It’ll be very special to wear the jersey. Once you get the opportunity to put that on, that’ll be incredible, so I’m really looking forward to that. Even just getting settled, getting to meet the guys, getting to be with the group, getting some practices and getting your feet wet again, and getting going will be a lot of fun.”

ON THE RESPONSE FROM THE HOCKEY WORLD

Nagle: “It’s been incredible [and] really makes you feel special. I’ve been fortunate enough to play in so many great places, obviously. I’ve been around, seen some different organizations over the years, and for that many people to really reach out was really special.

“You just meet so many good people in the hockey community. And just calls from guys, teams you play with [growing up], juniors, college pro, you name it. It was really neat.”

Ness: “It’s been great. It’s obviously big to the guys [in Providence]. You get really close to your team really fast, and I think these guys just [provide] a lot of support.

“I know they’re all going to be watching and cheering from back here, no matter what country they’re from. So it’s pretty cool. I mean, to know that they’re watching back here and cheering along, and just [the] great support from everyone, the staff, the players, the coaches, the organization, it’s been second to none.”

ON WHAT THIS SELECTION MEANS CAREER-WISE

Nagle: “I’ve had my ups and downs and had some pretty tough days in hockey at times. You really have to look in the mirror and try to keep going. I’ve been lucky to have some good bounces over the years and be in some places at the right time, and this has to be one of them.

“A lot of one-year deals! It’s just honestly, it’s a lot of fun. You meet so many good people. As tough as it can be, you can feel so far away some days, obviously, and so close other days, but it’s just being around the guys. The road trips, the fun, the stuff on the bus, the locker room, those are the things that I think I’ll miss most once things are said and done.”

Ness: “I think [challenges are] part of it, and that’s the journey and the path that have led me here, and [I am] lucky enough to go represent our country and go play in the Olympics.

“To me, everything happens for a reason, everything worked out, and I’m super excited to get over there and get started.”

Ness: “I think the American League is an incredible league. I think there [are] a lot of incredible players and guys [who] are just kind of scratching at the NHL.

“It’s always done a great job of developing players and getting guys ready for the next stage. I think the league keeps getting deeper and deeper, and everyone’s getting better every year. So, I think to be a part of this league for this long has been awesome.”

ON WHAT IS MOST ANTICIPATED

Nagle: “For me, to generalize, I guess everything from that aspect of you grew up watching the Olympics. It’s so special, just all the events, how many talented athletes are out there in the world. It’s the entire world competing at the top of their game and all these different competitions, and so I think that’ll be really special just to meet and see other athletes, all these people from around the world.

“Hopefully we’ll get some time to see some other competitions. I’m really looking forward to that. I think that should be pretty neat.”

Ness: “[The] Opening Ceremony, which is going to be another incredible experience. Really looking forward to that side of it, too.”