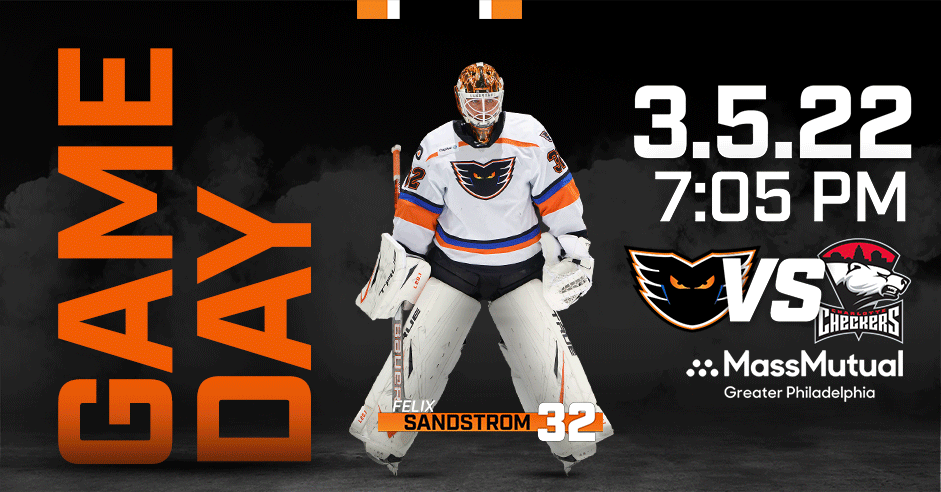 TONIGHT
It’s a GAMEDAY presented by MassMutual as the Phantoms continued their 25th Anniversary Celebration Weekend. The Lehigh Valley Phantoms host the Charlotte Checkers in the finale of a two-game series.
Lehigh Valley (18-22-10) is striving to snag a victory in the final game of the three-game homestand. Charlotte (28-21-3) has moved up to fourth place in the Atlantic Division. The Checkers are the AHL affiliate of the Florida Panthers and Seattle Kraken. This is game 51 of the season for the Phantoms. There are 25 games remaining including tonight.

LAST TIME
Matt Strome struck for a pair of goals, the first multi-goal game of his career, but five different Charlotte Checkers lit the lamp in a 5-2 decision on Friday night at PPL Center.Issac Ratcliffe returned to Lehigh Valley from the Flyers and notched a pair of assists on the Strome lamplighters. Trailing 2-1 in the second period, Connor Bunnaman had a blast off the crossbar that would have tied the game and just seconds later Henry Bowlby of Charlotte knifed into the slot and beat Felix Sandstrom with a key goal. The game had gone from “almost 2-2” straight to a 31 deficit in just seconds. Charlie Gerard momentarily thought he had scored in the third period on a great back-door find by Egor Zamula that would have pulled the Phantoms to within 4-3 with 12:30 remaining but the goal was immediatedly waived off for goalie interference on contact by Cal O’Reilly with Checkers’ netminder Spencer Knight.

WADE RETURNS
High-energy winger Wade Allison has been activated from injured reserve in Philadelphia and loaned to the Lehigh Valley Phantoms. The second-rounder out of Western Michigan University has played just seven games with the Phantoms and one game with the Flyers in a season with limited action due to three different injuries. Allison has three goals and one assist in his seven games with the Phantoms that al came in December and January.

SUSPENDED
Forward Hayden Hodgson has been suspended for three games as a result of an elbowing incident in Wednesday’s game against Providence. Hodgson will miss Lehigh Valley’s games on Mar. 4 and Mar. 5 vs. Charlotte, and also Tuesday (Mar. 8) at Hershey.

CHARLOTTE CHECKERS
Charlotte (28-21-3), the AHL affiliate of the Florida Panthers AND Seattle Kraken, is one of the highest scoring teams in the AHL at 3.38 goals-per-game placing them 6th in the league and 3rd in the conference. The Phantoms are 2-5-0 against Charlotte.
Kole Lind has 16-17-33 and has returned to the Checkers from Seattle. The Vancouver second-rounder in 2017 and former Utica Comet was snagged by the Kraken in the 2021 expansion draft.
Florida third-rounder Logan Hutsko, out of Boston College, is having a great rookie season and now leads the team in scoring with 11-24-34 including a goal and an assist on Friday against Lehigh Valley. He has scored four of his goals against the Phantoms.
32-year-old captain Zac Dalpe has 154 games of NHL experience including stays with Carolina, Buffalo, Vacnouver, Minnesota and Columbus. Dalpe leads the Checkers with 21 goals, five of which have come against the Phantoms.
20-year-old goalie and highly touted Boston College product Spencer Knight is down from Florida and has gone 7-3-0, 2.55, .917 with Charlotte. The Panthers’ 2019 first-rounder was taken #13 overall but this season had some meidocre numbers in the NHL going 9-6-2, 3.22, .898.

WORLD JUNIORS REUNION
Cam York of the Phantoms captained the USA World Juniors team to a 2-0 victory over Canada for the Gold Medal on January 6, 2021 in Edmonton. Charlotte goaltender Spencer Knight posted a 34-save shutout in the stunning upset.

News and Notes
– Friday was Cal O’Reilly’s 800th game in the American Hockey League. He will become the 41st player to play in 800 career games in the AHL. The 35-year-old captain is 9th in AHL history with 524 career assists.
– Cal O’Reilly has played in 991 professional games including the AHL, NHL and KHL. He is projected to reach his 1,000th pro game on March 25 at Laval.
– The Phantoms have played 50 games and have 25 remaining with less than two months to go in the 2021-22 regular season.
– Matt Strome has three goals in his last two games. All five of his goals this season have come since January 23.
– Hayden Hodgson leads the Phantoms with 16 goals and has four goals in the last seven games as well as 10 goals in the last 18 games.
– The Phantoms are tied for the second-most overtime games in the AHL with 14. The Phantoms have gone to overtime in three of their last five games.