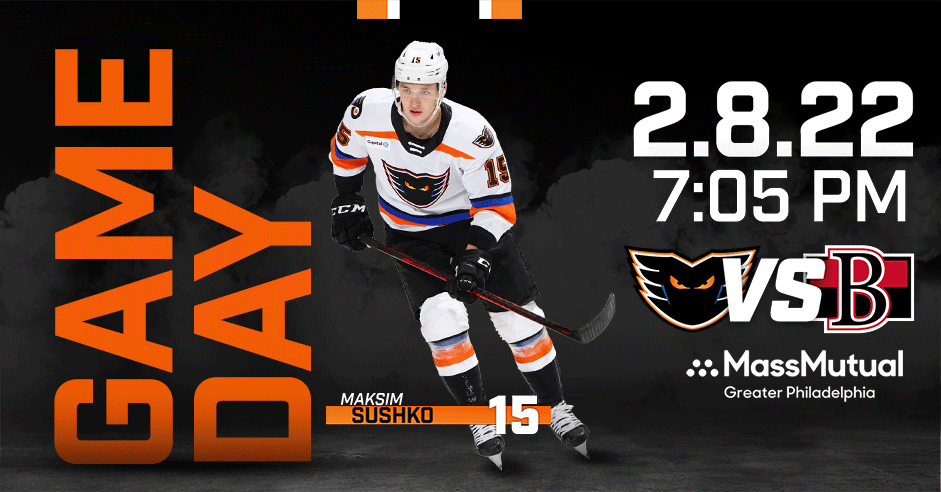 TONIGHT:
It’s a GAMEDAY at PPL Center presented by MassMutual as the Lehigh Valley Phantoms play host to the Belleville Senators, AHL affiliate of the Ottawa Senators. Lehigh Valley (15-16-8) has points in eight of it last nine home games (7-1-1). Belleville (17-18-0) is making its lone PPL Center visit of the season in a makeup engagement from a postponed game on December 15. Tonight is the first game of a six-game homestand for the Phantoms.

LAST TIME:
Lehigh Valley struck early for a 2-0 lead on goals by Hayden Hodgson and Charlie Gerard but the Hartford Wolf Pack rebounded with five goals in the second period and never looked back in a 6-4 win against the Phantoms on Saturday night at XL Center in Hartford. Wyatte Wylie scored for a second straight game while Isaac Ratcliffe contributed a goal and an assist.

WELCOME BACK!
Morgan Frost, Isaac Ratcliffe and Cam York have been returned to the Phantoms. Frost scored a goal and had an assist in his return to the Phantoms in Friday’s 5-1 win vs. Providence. Frost’s last game with the Phantoms had been November 20. He was leading the team in scoring (3-12-15) at the time of his recall. Ratcliffe is coming off his NHL deut this past Saturday in an overtime win for the Flyers against the Los Angeles Kings. Cam York’s most recent game with the Phantoms had been December 21 prior to his return this past Friday. He scored his first NHL goal on January 15 against the New York Rangers.

News and Notes:
– Lehigh Valley has gone 12-5-3 in its last 20 games after a beginning that saw just three wins in the first 19 games at 3-11-5.
-Adam Clendening is projected to play his 500th pro game on Saturday.
– Hayden Hodgson scored three goals last weekend to take the team lead with 12. He has scored two goals in a game three times this season.
– The Phantoms have points in 8 of their last 9 home games (6-1-2)
– Lehigh Valley’s six-game homestand is their longest stretch of consecutive home games this season.
– 11 Phantoms players this season have also suited up for the Philadelphia Flyers: Wade Allison, Connor Bunnaman, Jackson Cates, Morgan Frost, Gerry Mayhew, Isaac Ratcliffe, Linus Sandin, Felix Sandstrom, Max Willman, Cam York, Egor Zamula

UP NEXT:
The Phantoms play three home games this weekend beginning Friday night against the Hershey Bears on GO FOR GOLD weekend.