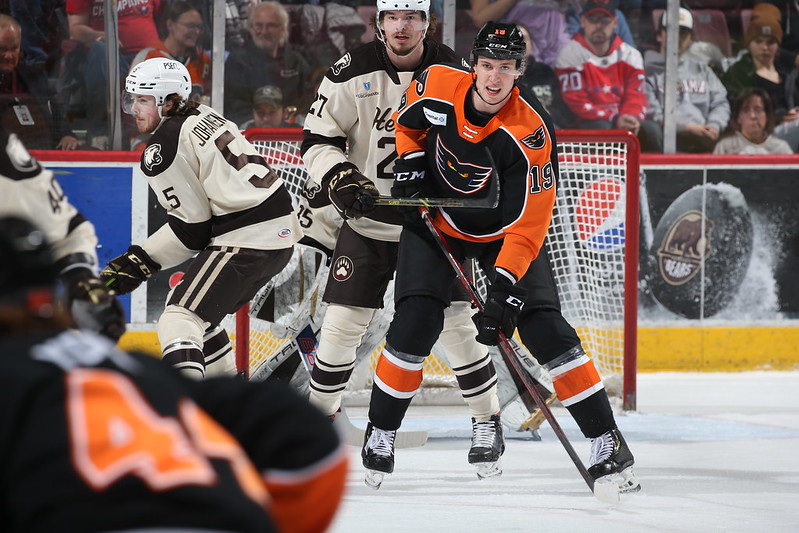 TONIGHT
It’s a GAMEDAY presented by MassMutual as the Lehigh Valley Phantoms once again travel to Chocolatetown for a 5:00 p.m. clash against the rival Hershey Bears.
Lehigh Valley (20-24-10) is looking to finish a perfect weekend after back-to-back wins at home on Friday and Saturday.  The Phantoms are 5-2-1 against Hershey entering Game 9 out of 14 in the season series. This is Game 55 of the 2021-22 season. There are 22 games remaining
Tonight’s game is the first of six straight on the road for Lehigh Valley. The Phantoms don’t return to PPL Center until April 1.

LAST TIME
The Comeback Phantoms did it again. Lehigh Valley rallied from a two-goal deficit for the second night in a row this time shooting past the Hartford Wolf Pack 6-5 in a wild, see-saw game at PPL Center. Logan Day had a Gordie Howe Hat Trick with a goal, assist and fight in the same game. He scored the game winner with 4:07 left to break a 5-5 tie. Hayden Hodgson (17th, 18th) scored two goals in the rally and Cal O’Reilly (15th, 16th) had a pair of goals in the first period while Tanner Laczynski scored his second.
Felix Sandstrom entered in relief and made 22 saves on 23 shots to backstup the thrilling win. The Phantoms killed a 6-on-4 late in the game while protecting their one goal lead. Adam Clendening had a huge blocked shot from right on top of him as part of a lengthy shift that helped get the Phantoms to the finish line.
It was tied for the highest scoring of the season for Lehigh Valley.

HERSHEY BEARS
Hershey (28-21-7) is coming off a 2-1 win at Bridgeport on Friday with Beck Malenstyn scoring his third goal of the week. Hershey did not play on Saturday.
The Bears defeated the Phantoms 4-0 last Tuesday at Giant Center for only their second regulation win in eight tries against Lehigh Valley this year and aso only the second time the Phantoms have been shutout this year.
Leading scorer Joe Snively (15-23-38) has more recently been thriving with the Washington Capitals. Phantoms alum Mike Vecchione (12-24-36) is the team’s active leading scorer. Zach Fucale (9-8-4, 2.72, .890) found his form with a 26-save shutout of the Phantoms on Tuesday. Scott Allen is the first-year head coach of the Bears who had dropped four in a row before their current two-game win streak.

News and Notes
– Cal O’Reilly has scored 5 of his 16 goals this season against Hershey including 3 shorthanded goals. The 35-year-old veteran is fast approaching his all-time career-best of 18 goals in a season which he set as a 20-yea-rookie rookie in 2006-07 with the Milwaukee Admirals.
– Cal O’Reilly has played in 995 professional games including the AHL, NHL and KHL. He is projected to reach his 1,000th pro game on March 25 at Laval. On March 4, he became the 41st player to reach 800 AHL games.
– Hard-shooting Wade Allison is on a four-game goal streak with lamplights in his most recent four games dating back to January. Allison’s goals came on January 14, January 15, January 16 and March 11. Allison missed Saturday’s game with an injury.
– The Phantoms have played 54 games and have 22 remaining.
– Hayden Hodgson leads the Phantoms with 18 goals and has six goals in the last nine games as well as 12 goals in the last 21 games. Hodgson leads the Phantoms with FOUR multi-goal games. He had two goals in each of the Phantoms’ high-scoring 6-5 comeback wins this season on December 31 at Utica and March 12 vs. Hartford.
– Hershey is just 2/28 (7.1%) against the Phantoms on the power play. Lehigh Valley is 3/28 (10.7%) against the Bears.