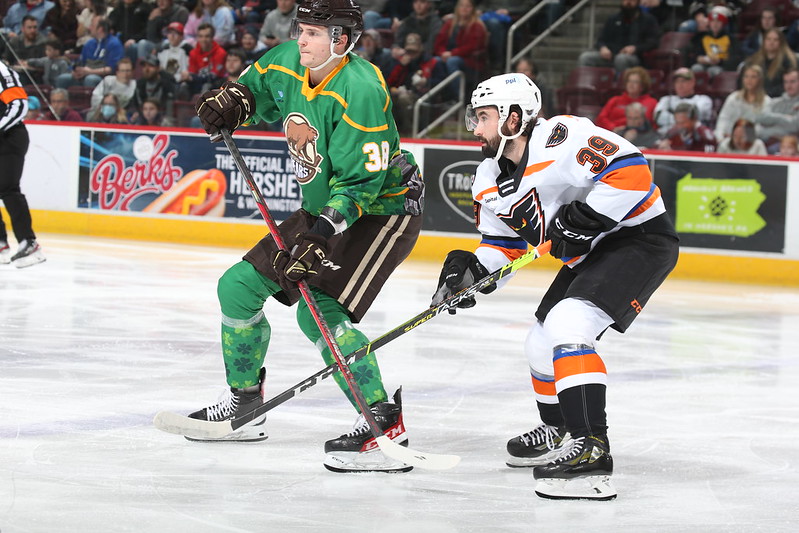 Hershey, PA – A great goaltenders’ battle in Hershey saw Felix Sandstrom and Zach Fucale practically match each other save for save on Sunday evening with the Hershey Bears ultimately breaking through and finding the back of the net in a 2-0 nailbiter against the rival Lehigh Valley Phantoms at Giant Center.

Marcus Vela tipped a point-shot with 4:08 left in the second period to break the scoreless deadlock on what was the only goal either netminder would allow. Mike Sgarbossa sealed the win with an ice-length empty-netter at the end.

Fucale recorded his third consecutive shutout as well as his second against the Phantoms this week with a 29-save performance that saw several challenging stops and close-range chances for Lehigh Valley.

Sandstrom was terrific as well in a perofmrnace that included first-period denials on a Brett Leason breakaway and a Marcus Vela backdoor try on a 4-on-2 with just eight seconds left in the opening frame. That left-pad save for Sandstrom at the end of the first easily rates among his most spectacular stops of the season.

Some of Lehigh Valley’s best chances included a Cal O’Reilly shorthanded breakaway in the first period, a Garrett Wilson shot on the rush, an O’Reilly tip from close range, and a Max Willman try on the rebound of a sharp-angle Isaac Ratclfife shot on the rush in the third period. Willman was contacted from behind and called for charging on the play. O’Reilly was well beyond the defense and in the clear on his first-period rush but the 35-year-old captain, who has already scored three shorties and five totals goals against Hershey this season, was stuffed by the left pad of Fucale.

Adam Clendening had a chance to score on the backdoor in the third period as he stepped up to join the rush. He was horse-collared off the puck from behind and just missed burying the equalizer. Logan Day stepped up with the attack as well for a chance to score in his third consecutive game.

But Fucale stopped them all on his way to 29 saves in total. The Phantoms, who had scored 10 total goals in the previous two games of the weekend, were unable to break through against the talented Hershey backstop.

Lehigh Valley (20-25-10) stayed close partly due to some strong penalty kill work as well. The Phantoms held Hershey to 0-for-6 on the power play which included a 5-on-3 kill early in the second period.

The Phantoms appeared to AGAIN be on the verge of equalizing in the last three minutes of the game after a late penalty-kill following Adam Johnson’s hook that prevented a breakaway. But the Bears hung on through that late push as well and a deflected puck into the slot found the stick of Sgarbossa who rifled a bullseye straight into the middle of the net on the other side of the ice mere seconds after Sandstrom had bolted for the bench for the extra attacker.

The Phantoms are 5-3-1 against Hershey this season. The two rivals will meet again for Game 10 out of 14 when the Phantoms return to Giant Center on March 23.

Next up for Lehigh Valley’s six-game road swing will be a pair of games at the first-place Springfield Thunderbirds on Friday, March 18 and Saturday, March 19.