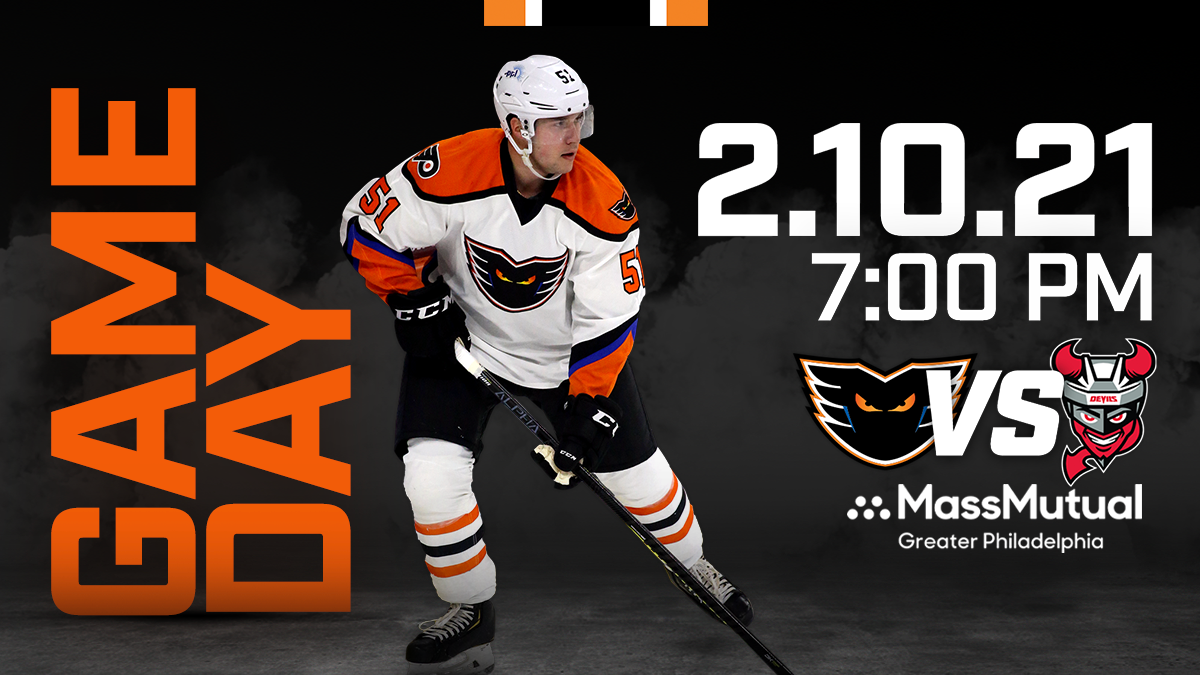 Tonight’s Game – The Lehigh Valley Phantoms travel to the RWJBarnabas Health Hockey House in Newark, N.J. to take on the Binghamton Devils at 7:00 p.m. It is the first of 10 meetings between the Phantoms and Devils this season. Lehigh Valley will play a home-and-home set next weekend with the Devils returning to Newark on Friday, February 19 and then hosting the Devils at PPL Center for the Phantoms home opener on Saturday, February 20. This is the Phantoms’ first game in the Garden State since December 14, 2014 when Lehigh Valley took on the Albany Devils at Boardwalk Hall in Atlantic City.

What a comeback – The Lehigh Valley Phantoms rallied from behind in their season opener on Saturday afternoon at Hershey. It took over 59 minutes for the team to score its first goal of the season on Scott Gordon’s birthday but rookie defenseman Wyatte Wylie finally came through with just 44.7 seconds remaining with a big slapshot to forge a 1-1 tie. Former Providence Bruin Ryan Fitzgerald made the most of his Phantoms debut rifling home the winner in overtime. Zane McIntyre was tremendous with 34 saves on 35 shots to keep the Phantoms within striking distance and give the team the chance for the big comeback.

Hey, We Know You! – One of the newest members of the Binghamton Devils this season is popular Phantoms alum Danick Martel. The speedy winger played in 199 games for the Lehigh Valley Phantoms from 2015-18 and rates third in Lehigh Valley history with 68 goals and sixth 120 points. Martel was twice named as the team’s Man of the Year for his work in the community with youth programs and the Polar Bears Special Hockey team of the Lehigh Valley. Martel scored 20 goals with Syracuse and Springfield last year and scored a goal against the Phantoms on January 15, 2020 in his emotional first game back at PPL Center.

Scouting the Devils – Binghamton picked up a similar win to Lehigh Valley in its season opener rallying from a third-period deficit on the road to post an overtime triumph.  The Devils trailed 3-1 in the third period at Wilkes-Barre on Monday night but Danick Martel and Ryan Schmelzer scored back-to-back to force extra hockey thus setting up Harvard product Reilly Walsh to score the overtime winner in his pro debut.
Brett Seney returns after leading the Devils in scoring last year with 19-25-44.
20-year-old Nolan Foote scored in his pro debut. He had been a Tampa Bay first-rounder in 2019 and is the brother of Tampa Bay 2017 first-rounder Cal Foote and also the son of two-time Stanley Cup Champion Adam Foote of Colorado.
Jeremy Brodeur, son of Hall of Famer Martin Brodeur, is one of Binghamton’s goalies.

Family Ties – Saturday’s overtime goal-scorer for the Phantoms, Ryan Fitzgerald, is facing his Dad’s organization when the Phantoms play in Newark on Wednesday. Tom Fitzgerald is the General Manager of the New Jersey Devils.  Tom Fitzgerald played in 1,097 NHL games primarily for the New York Islanders, Nashville, Toronto and Boston and is also known for having scored some key goals in the Stanley Cup Playoffs.
Ryan had played the previous three seasons with the Providence Bruins before the Boston College product joined the Phantoms this year. He is cousins with Kevin Hayes of the Philadelphia Flyers and both players wear #13. Fitzgerald is also cousins with Brady Tkachuk of Ottawa and Matthew Tkachuk of Calgary.

First Goals of the Season for Lehigh Valley:
Rookie defenseman Wyatte Wylie joined an elite group when he scored the first goal of the season in the last minute of regulation on Saturday at Hershey. Wylie is the first-ever Lehigh Valley rookie to score the team’s first goal of the year.
2014 – Chris VandeVelde
2015 – Aaron Palushaj
2016 – Mark Zengerle
2017 – Danick Martel
2018 – Greg Carey
2019 – Kurtis Gabriel
2021 – Wyatte Wylie

Wisdom in Youth – Zayde Wisdom became the youngest player in Phantoms franchise history if he plays in today’s game. The fourth-round selection of the Flyers in 2020 from the Kingston Frontenacs is 18 years and 6 months and 30 days old. That makes him 20 days younger than Derek Mathers when he debuted for the Adirondack Phantoms in March, 2012. He became the fourth 18-year-old in Phantoms franchise history (Derek Mathers, Nick Cousins and Scott Laughton) and the first-ever with Lehigh Valley.

Teen Sensations – The Lehigh Valley Phantoms have previously had five players debut for the team as teenagers. Four of them are now with the Flyers. Robert Hagg, Nicolas Aube-Kubel, Oskar Lindblom, Isaac Ratcliffe, Joel Farabee are members of that select group. Ratcliffe is currently the youngest with Lehigh Valley having debuted at 19 years, 1 month and 29 days in April, 2018. Two more teenagers joined this select group when Tyson Foerster, 19, and Zayde Wisdom, 18, made their pro debuts on February 6, 2021 at Hershey.

Upcoming – The Phantoms return to Hershey next Sunday for a 1:00 Valentine’s showdown against the Bears. Lehigh Valley’s home opener is Saturday, February 20 at 7:05 p.m. against the Binghamton Devils at PPL Center.