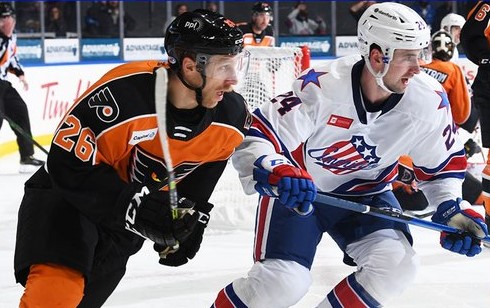 Rochester, NY – Morgan Frost led the way with a goal and two assists and the Lehigh Valley Phantoms overcame two deficits in a wild, see-saw contest but the Rochester Americans ultimately prevailed in a 5-4 shootout decision. Gerry Mayhew (7th) had tied the game with just 1:27 remaining while Connor Bunnaman (1st) and Garrett Wilson (3rd) also scored for the Phantoms.

Brett Murray led the Americans with two goals and J.J. Peterka gave the Amerks the lead with under 4:00 left and also scored the shootout winner in the third round.

The Phantoms spotted the host Amerks with a 2-0 lead in the opening eight minutes of the game on goals by Brett Murray and then a breakaway by Linus Weissbach before finding their stride.

Garett Wilson scored just over 10 minutes into the game on a set up by Morgan Frost from behind the goal.

The Phantoms built momentum for the remainder of the first and then carried that into a dominating performance in the second period in which they out shot Rochester 19-4 to establish a new season high for most shots in a period.

Morgan Frost sniped from the left circle on the power play just over four minutes into the middle frame for his second goal of the season to even the count at 2-2 assisted by Cooper Zech and Logan Day. Just 12 seconds later it was Connor Bunnaman on the rebound off the right pad of Michael Houser after a right-point shot from Adam Clendening handcuffed the Rochester goaltender. Bunnaman’s first of the season put the Phantoms in front at 3-2.

Felix Sandstrom made a sparkling save lunging to his left for a glove denial on Mark Jankowski on the back-door of a 2-on-1 but otherwise the Phantoms largely dominated the second period and were on the verge of extending their 3-2 lead on several occasions. Bunnaman almost made it a two-goal game for him on multiple good looks in the period.

Rochester pushed back in the third and the Phantoms were hanging on but eventually Brett Murray’s second goal of the game with just 7:03 left pulled the Americans back to even at 3-3. Rochester then took the lead on J.J. Peterka’s goal from the side of the net perhaps caromed off the back of Sandstrom with just 3:26 to go for a 4-3 lead.

Both teams lost players to penalties and the Phantoms pulled goalie Felix Sandstrom to set up a 5-on-4 extra attacker situation. Frost’s shot off Houser bounded out to Mayhew who elevated the equalizing goal top shelf with just 1:27 left to force a 4-4 tie.

Rochester had the first crack in overtime but Sandstrom made a pair of big stops. Lehigh Valley had a power play with just 2:05 left in the overtime but their opportunities were either deflected by defense or just missed. Frost had a look at a corner with about 15 seconds remaining but the shot whistled wide of the net.

First-rounder Jack Quinn and J.J. Peterka scored in the shootout while the Phantoms were unable to find the back of the net in their first shootout of the season.

The Lehigh Valley Phantoms’ road-trip continues Saturday at 4:00 p.m. at the Toronto Marlies.