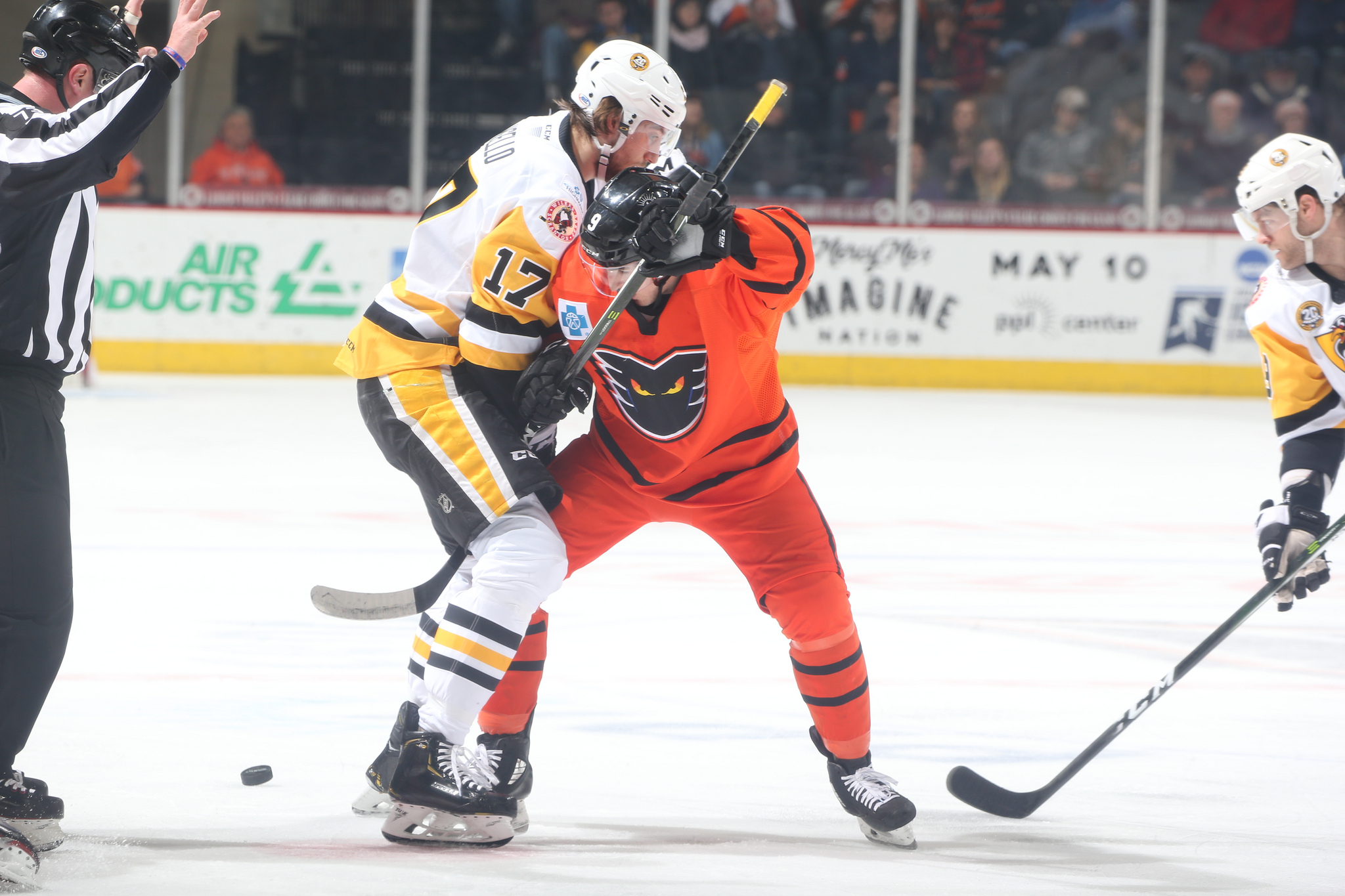 Lehigh Valley, Pa. – The Lehigh Valley Phantoms (30-26-3-3) fell 4-1 in a Wednesday rivalry game against the Wilkes-Barre/Scranton Penguins inside PPL Center. Byron Froese scored his second goal with the Phantoms, both goals have now come against the Penguins. Froese’s first goal at home also came just a day after his 28th birthday. The loss is just the second Wednesday night contest the Phantoms have dropped all season, moving to 7-2 in mid-week showdowns.

Wilkes-Barre/Scranton took an early lead as Jimmy Hayes scored his 12th goal of the season just 1:53 into tonight’s contest. Joseph Cramarossa carried the puck into the middle of the zone and flipped a backhand shot on Alex Lyon, who was able to make the leg-pad save. Unfortunately, the rebound caromed right to Jimmy Hayes who was able to give the Penguins a 1-0 lead.

For the second straight game, the Phantoms’ best chance at a goal came off the stick of Zach Palmquist. Palmquist got space in the middle of the zone and ripped a shot wide of the boards but the rebound bounced right back to him with an open net. Palmquist got a stick on the puck but Jarry was able to dive across the crease enough to knock it away and keep it out of the net.

Both goalies were sensational for their respective teams during the second period. Fast-paced action with no penalties from either team, also saw no goals thanks to Alex Lyon and Tristian Jarry each making double digit saves during the middle frame. Jarry made 10 saves for the Penguins, while Lyon stopped 12 shots for the Phantoms.

After the second period featured no goals, the third period had one in the first 19 seconds. Ryan Haggerty skated down the left side off the opening faceoff and fired a laser up and over the glove of Alex Lyon to make it 2-0. The goal marks Haggerty’s 16th of the season and fourth against the Phantoms.

Jimmy Hayes scored his second goal of the game with 11 minutes remaining. Hayes got behind the defense and was able to put a shot across his body up into the top corner over Lyon to make it 3-0.

Lehigh Valley got on the board with exactly nine minutes left in the game thanks to Byron Froese’s 18th of the season and second with the Phantoms. One day after his 28th birthday, Froese wrapped around the net and threw a shot on net that ricocheted of Penguins’ defender and in to make it a 3-1 game.

With the Phantoms’ net empty, Jimmy Hayes was able to complete the hat trick with 36 seconds remaining to seal the 4-1 win for Wilkes-Barre/Scranton.

NEXT TIME OUT: Lehigh Valley will continue the busy week and home stretch as they will be right back on the PPL Center on Friday as they take on the Providence Bruins for the final time in Allentown. The Phantoms are 2-2 against Providence this year and currently chasing the Bruins for a playoff spot.