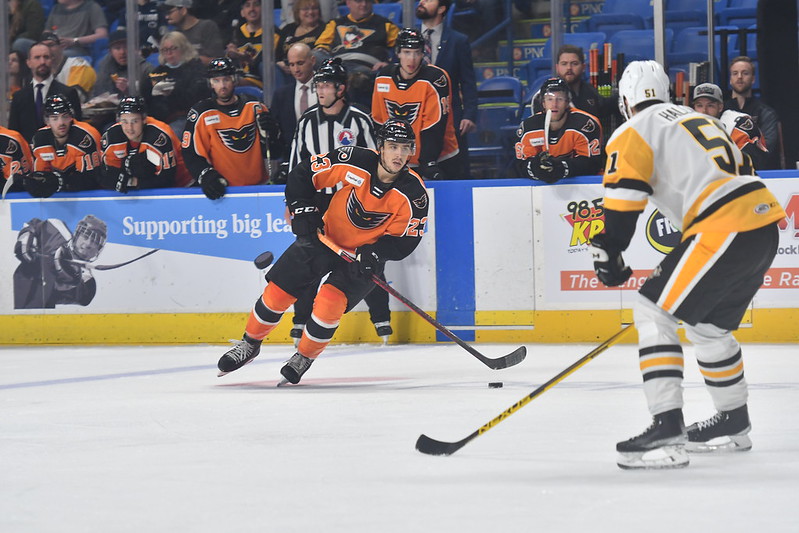 Wilkes-Barre, PA – Tyson Foerster scored the Phantoms’ first goal of the season on a power-play rush with Cam York and Linus Sandin but the Wilkes-Barre/Scranton Penguins broke a 1-1 tie early in the third on a goal by Niklas Almari to snag a 2-1 season-opening win on Saturday night in northeast Pennsylvania. 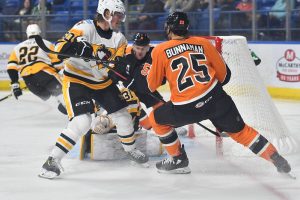 Penguins’ newcomer Filip Lindberg was sensational in his pro debut with 30 saves on 31 shots. 14 of those stops came in the first period when Lehigh Valley largely dominated play and held a 14-6 shots advantage but the host Penguins came up with some big penalty kill stops and emerged with a 1-0 lead after one on a goal by rookie Valtteri Puustinen.

The Phantoms came close to tying the game late in the third period on a nice chance by Jackson Cates from the right circle with about 5:00 left but Lindberg made a strong denial off the right pad. Connor Bunnaman was denied right on top of Lindberg on the sequence as well.

Felix Sandstrom was solid on the Lehigh Valley side with 21 denials on 23 shots faced.

The game marked the head coaching debut of Ian Laperriere but the new bench boss will have to wait another day to acquire his first win.

Foerster had missed on a couple big opportunities from the right circle earlier in the period. But with 2:59 left in the second, Foerster with York and Sandin sped up the ice on the rush with just a few seconds remaining on the power play. Sandin gave to York at the left boards who offered a perfect pass across to Foerster in the right circle who buried it.

Brennan Saulnier dropped the gloves in the first period with Jamie Devane in response to a boarding on Mason Millman in the team’s first fight of the season.

The Penguins welcomed a raucous and enthusiastic crowd of 5,785 celebrating the return of hockey in northeast Pennsylvania helping to raise the energy level of the rivalry again. 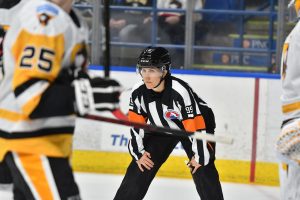 The night was also historic as it marked the first-ever AHL game with a woman referee. Katie Guay dropped the puck for the opening center faceoff to begin the 2021-22 season in the landmark moment.

Lehigh Valley is now 5-3-0 in season-openers and the Phantoms franchise is now 18-8 all-time since the beginning of the Philadelphia Phantoms in 1996. Foerster joiins a select group of first-goal scorers that includes Chris VandeVelde, Aaron Palushaj, Mark Zengerle, Danick Martel, Greg Carey, Kurtis Gabriel and Wyatte Wylie.

The Phantoms travel to Hershey for Game 2 of the season on Sunday at 3:00 p.m. Broadcast coverage commences at 2:30 with the pregame show on the Phantoms 365 app and 1470-WSAN. Phantoms can also listen on their smart speakers: “Play Phantoms Radio 24/7.” Fans can also watch Sunday’s game for free as part of the weekend preview on AHL.TV