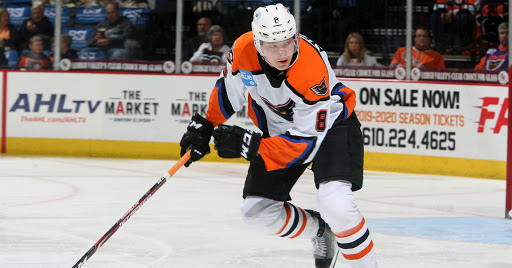 Lehigh Valley, PA – The Philadelphia Flyers have announced that forward Matt Strome has been recalled from the Lehigh Valley Phantoms and added to the Flyers taxi squad. Additionally, several recent Phantoms from this year and last season to the Flyers roster from the taxi squad including Andy Andreoff, David Kase, Samuel Morin and Maksim Sushko.

Strome has scored one goal in two games with the Phantoms this season after a campaign with two goals with the Phantoms in 19 games last year. He also scored nine goals and 11 assists with the Reading Royals in the ECHL in 20 games. The fourth-round selection of the Flyers in the 2017 NHL Entry Draft was formerly a captain with the Hamilton Bulldogs. He won an OHL championship on the team in the 2017-18 season.

Kase and Sushko have both played in all three games so far this season with the Phantoms and also played in Europe this past fall before returning to North America. Kase had a three-point effort at Hershey last Sunday including an overtime winning goal. Morin played in the first game of the season on February 6 at Hershey which was his 171st all-time in a Lehigh Valley sweater over the past six seasons.

The Lehigh Valley Phantoms are ready for the seventh home opener at PPL Center on Saturday night against the Binghamton Devils.