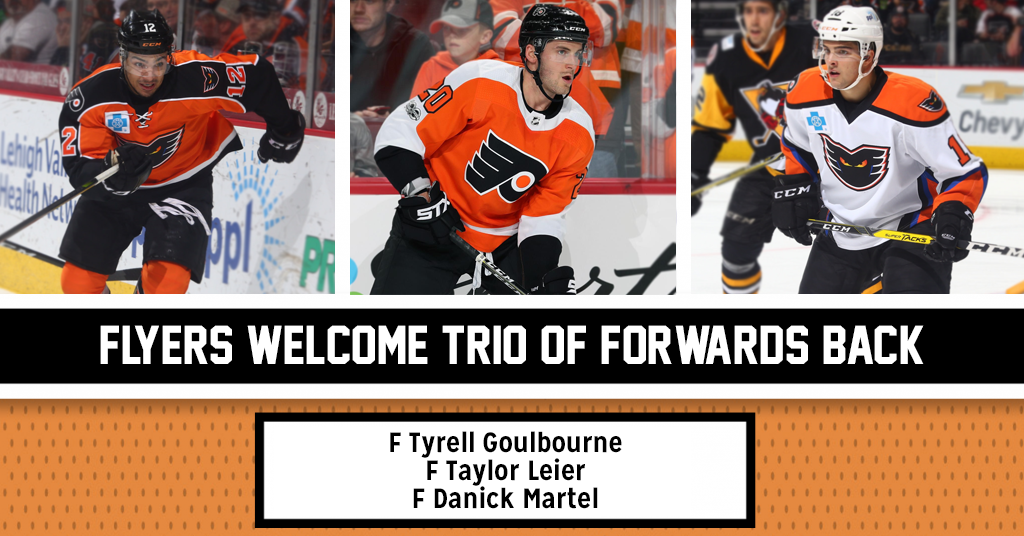 The Philadelphia Flyers, parent club of the Lehigh Valley Phantoms, announced today that they have re-signed forwards Tyrell Goulbourne and Taylor Leier to one-year contracts and that forward Danick Martel has accepted his Qualifying Offer on a one-year contract.

A third-round selection (72 overall) of the Flyers in the 2013 NHL Entry Draft, Goulbourne is coming off of a third professional season that saw a number of milestones.  The hard-nosed winger put up career highs in goals (8), assists (11), points (19), penalty minutes (79) and plus-minus rating (+15) over the course of 63 games with the Phantoms.  He also received his first NHL call up on January 12, 2018, in which he played in 9 contests for the Flyers.

A former AHL All-Star with the Phantoms during the 2016-17 season, Leier recently completed his first full season at the NHL level.  The former Phantom forward totaled 46 goals and 71 assists for 117 points across 192 total games with Lehigh Valley.  This past season, Leier played 39 games with the Flyers with five points (1G-4A).

Martel, a 24-year-old winger out of Drummondville, Quebec, will be entering into his fifth professional season. As the current active leader in most games played in a Lehigh Valley Phantoms uniform, Martel has amassed 68 goals and 52 assists for 120 points in 199 total games at the AHL level.  Most recently, he is coming off a season where he tied his career high total of 40 points by potting 25 goals and tallying 15 assists.

The 5-foot-8-inch speedy winger was second on the Phantoms in goals scored (25) and finished the season tied for first in the league with the longest goal streak at 6 games (7G-2A).  Martel was also named a 2017-18 AHL All-Star, but was unable to appear in the All-Star Classic due to an injury.  He made his NHL debut with the Flyers on November 22 against the New York Islanders and appeared in three additional games with Philadelphia this past season.