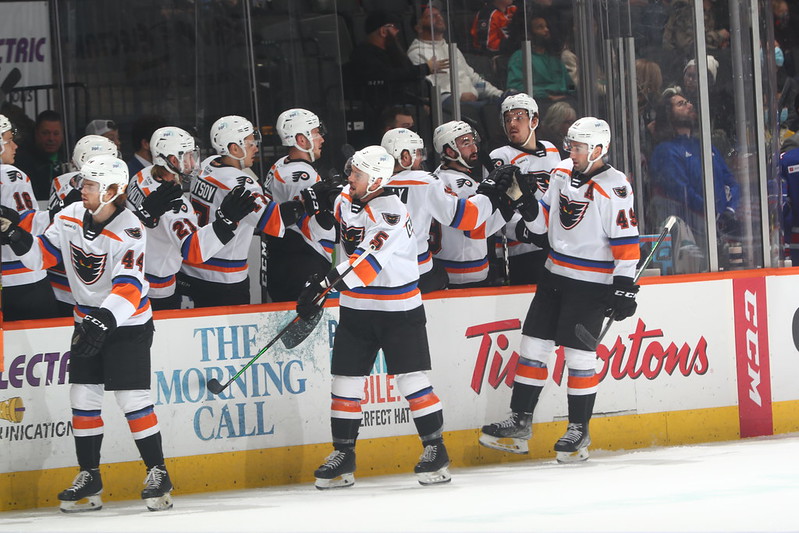 It was most certainly not the way Ian Laperrière thought his new career would begin as head coach of the Lehigh Valley Phantoms.

Three wins in the first 19 games, including winless streaks of seven and eight.

But “Lappy” knew he had a solid team that was much better than its record. “Stay with the structure” was his mantra that he hammered to his players over and over. They knew it would get turned around eventually. They didn’t know the recovery would be so dramatic though. 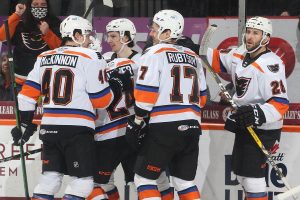 Right after an eight-game winless streak came a nine-game points streak ― the longest since the team moved to Lehigh Valley in 2014 ― with a 7-0-1-1 mark from Dec. 11 to Jan. 14. The wins and the success came rapidly. Pucks that were missing the net or finding posts were now going in. The Phantoms’ confidence that had been slumping for the first quarter of the season was now surging and the team put together monumental comebacks in games in which they trailed by four goals and three goals.

Overall, it was the longest points streak for the franchise since the Philadelphia Phantoms compiled a then-AHL-record 17-game win streak in 2004-05. That Phantoms team went on to win the Calder Cup. And with the results this team has compiled in the last six weeks, it wouldn’t surprise anyone to see Lehigh Valley playing more hockey in May and June.

From a 3-11-4-1 to start to a more recent stretch of 8-1-2-1. One could say that this Phantoms team had suddenly “figured it out” but that wouldn’t really be accurate. The team kept doing many of the same things. They simply did them more consistently while reducing the number of costly mistakes.

“The struggles we had at the beginning, we learned from it,” Laperrière said. “We’re becoming a better team as a result. Those guys are a confident group. They work for one another. They care for one another. That’s why we are getting these results now.”

The ability to stay together and not panic was most evident in the team’s New Year’s Eve game at the Utica Comets, who at that point had only one regulation loss in 21 games. Playing against the top team in the league in front of a loud and boisterous crowd, the Phantoms found themselves trailing 4-0 and 5-1. Instead of folding up the tent, they went to work and forged perhaps the unlikeliest of comebacks, resulting in a 6-5 overtime victory.

In order to receive that kind of push when the games were not going their way, Laperriere needed his leadership group.

“For me being a first year head coach. Having veterans like (Cal) O’Reilly and (Garrett) Wilson and (Adam) Clendening and (Gerry) Mayhew when he’s here, I’m fortunate. I need guys like that. They’re pushing with me. They make the right plays at the right time. They don’t panic. They push everybody in the right direction. I feel fortunate to have those guys on my team.”

But that first quarter of the season was tough. On everyone. For captain O’Reilly, it was zero points in October. Pretty surprising and unusual for a guy who is used to being among the team leaders in scoring everywhere he has played. He has 519 career assists to rank ninth all-time in the American Hockey League, but the highly regarded leader ― who is wearing the “C” for his fourth different team ― admitted it was a trying time for him.

“Hardest struggles I’ve had in my career,” O’Reilly said. “Me as a captain and a guy who plays a lot of minutes and is counted on… it was hard on me. It was a tough stretch especially when you’re not winning it really plays in your head. And not just me, I think our whole team offensively. It was in our head. We were squeezing the sticks.”

But all it took were a few bounces, more consistent play, continued work and improvement on the structure, and finally some success to get things rolling. The momentum has shown little sign of slowing down.

“As you’ve seen, our whole team is playing with a lot more confidence,” O’Reilly said. “We’re making more plays. And we’re scoring more. And that raises my confidence and everyone else’s. And we’re getting our game, myself included, to where it should be. That’s how you win games. Guys playing with confidence… in each other and in themselves.”

The Phantoms still reference that incredible comeback at Utica as an indication of what this team is truly capable of. The ability to battle back has become a hallmark of the Phantoms, especially when compared to the early-season struggle.

“The start of the season, I don’t think we were seeing a lot of that,” forward Isaac Ratcliffe said. “As of late, we’ve seen a lot more positives than negatives. We look back to New Year’s Eve when we played against Utica. We were down 5-1 there and we were able to come back and win that in overtime. We’re definitely proud of our resilience especially coming off (different season disruptions).”

Ratcliffe says the victories and goals and point streak have all been no accident. It’s been a result of driving forward with the same ideas even when the results weren’t going their way.

As is common in the American Hockey League, it’s been a “next man up” mentality. When various players have gone down with injuries or have been recalled to the Philadelphia Flyers, sometimes that involves relying on players you barely knew or had not even heard of a few days earlier or at the beginning of the season. 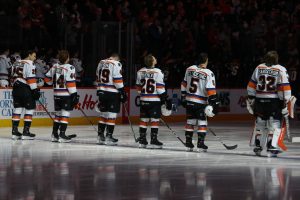 Hayden Hodgson arrived at Phantoms training camp on a tryout contract and impressed so much that he quickly earned an AHL deal with the club. He has developed into one of the team’s top players. Having spent most of his career in the ECHL, and with zero AHL games in the last three years, Hodgson has been one of several nice surprises to help drive this team’s recovery. During the incredible comeback at Utica, Hodgson scored two goals in the third period, including the equalizer with 35.1 seconds left. He then proceeded to steal the puck in overtime to set up O’Reilly for the game winner.

How was this talented player overlooked at the AHL level for so long?

“I asked him the same question!” Laperrière exclaimed. “I asked him, ‘What am I missing here? Am I missing something?!’ He missed some time with some injuries and that’s tough. I got to give him credit, he’s coachable. He’s been our biggest surprise. I feel like he came out of nowhere. I didn’t know about him. Nobody here knew about him. I was wondering, ‘Who is this kid?’ and he came on the ice and I saw what he can do. What I like about him is he does everything hard and it starts in practice. And you see the results. The sky’s the limit. I wouldn’t be surprised if in the next couple years he plays at the next level.”

“I think it’s just making the most of it and finding somebody who believes in you,” said Hodgson of his impressive season. “Whether it’s the team or the coach… there’s a lot of good players who just need a chance and have someone believe in them. I think I’m just one of those guys. I was given an opportunity. I just put my head down and work as hard as I can and that’s what I try to do and what my parents have told me ever since I’ve been young. Every single day is a day to work as hard as I can.

“I haven’t been in this league since I was with Cleveland (four years ago). Every single day I just can’t take it for granted. I’m putting in the effort and the work and I’m making it known that I’m here and I’m here to stay.”

The Phantoms, with their surging confidence, are similarly making it known to the rest of the Atlantic Division that they’re here in the thick of the playoff race and are putting in the work and that they’re here to stay.