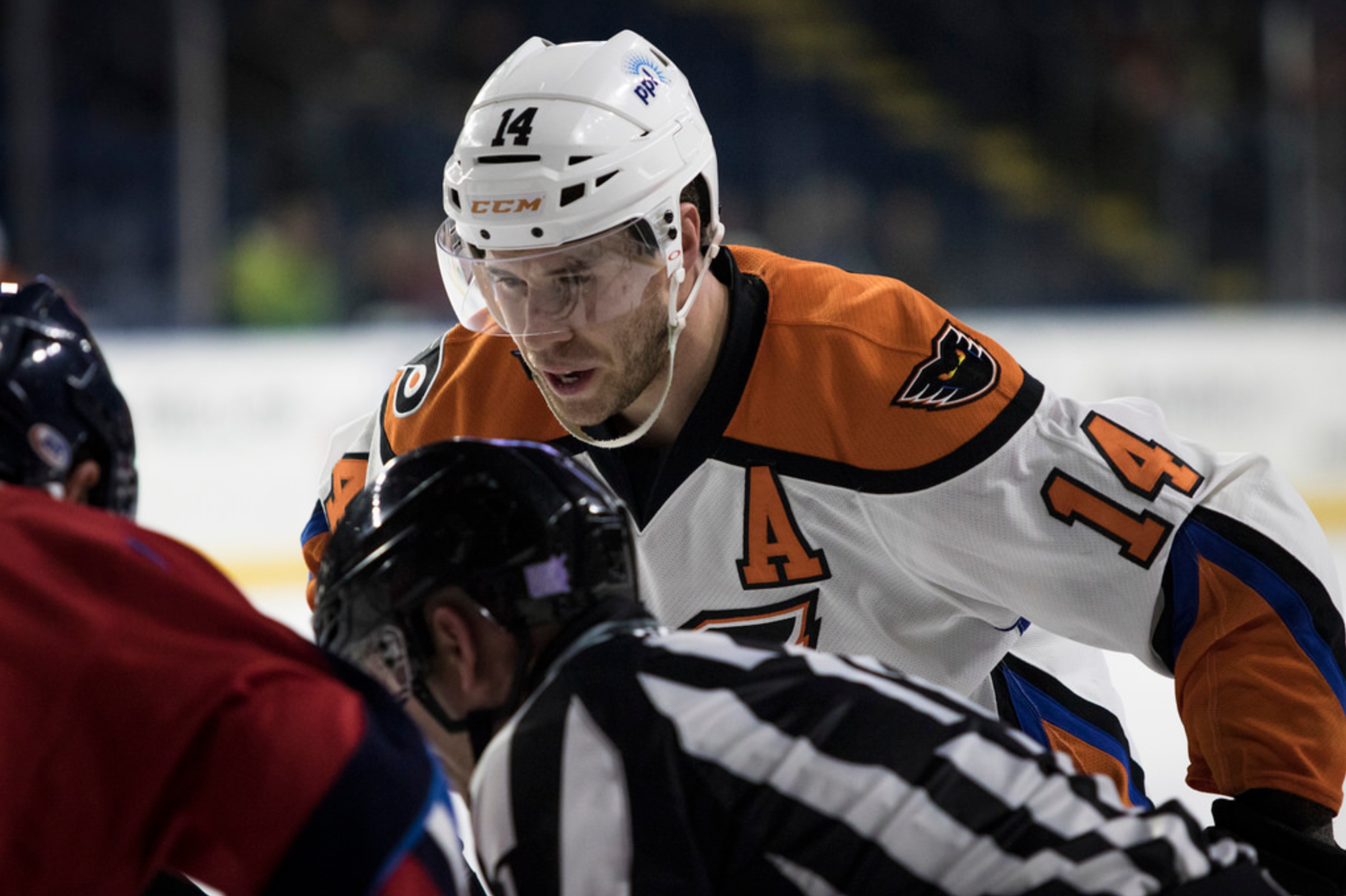 Springfield, MA – Lehigh Valley tied a team record with eight goals in a game and equaled an all-time franchise record for most goals on the road in an 8-2 blowout win at the Springfield Thunderbirds on Friday night. The Phantoms pushed their win streak to five straight while their 32nd win of the season came in just their 52nd game. The Phantoms also vaulted into the top spot in the Atlantic Division via points percentage as well as total points via their victory combined with a loss by the Wilkes-Barre/Scranton Penguins at Rochester.

Corban Knight (10th, 11th, 12th) received credit for a bizarre hat trick when the Springfield Thunderbirds inadvertently passed the puck into their own net with the goalie pulled on a delayed penalty. Danick Martel (18th, 19th) returned to the Phantoms lineup for the first time in a month since his broken jaw injury on January 13 and quickly jumped back into the action scoring the first two goals of the game. Greg Carey and Cole Bardreau each notched three assists apiece. Oskar Lindblom (14th), Phil Varone (12th) and Nic Aube-Kubel (15th) also joined the scoring party.

The offensive production equaled the most ever for the team since arriving to the Lehigh Valley tying the record first set on December 14, 2016 in an 8-6 win over Bridgeport.

Eight goals in an away game is the most ever for Lehigh Valley and ties the most in Phantoms franchise history previously accomplished on November 18, 2000 when the Philadelphia Phantoms won 8-2 at Norfolk.

John Muse turned aside 36 out of 38 Springfield shots in an extremely strong goaltending performance that was somewhat overshadowed by the Phantoms potent offensive attack.

Springfield stormed out of the gates to a 12-1 shots advantage before the Phantoms would kick it into gear. But Muse made some fine stops to prevent the Thunderbirds from establishing an early tone. 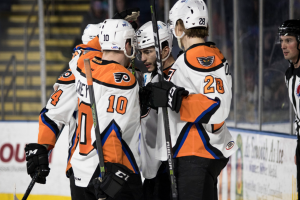 Danick Martel had a little poke and bank on the puck after Springfield starting goalie Sam Montembeault and his defensive teammate were careless and lacking urgency in their zone. With his back turned, Montembeault suddenly found that his former teammate from Major Juniors, Martel, had streaked in for the bizarre opening goal.

Martel would convert again a couple minutes later but somewhat more traditionally when Knight, from behind the net, would find Martel stationed on the doorstep to slam through his 19th of the season and second of the night.

Later it was Corban Knight out in front on a feed from Tyrell Goulbourne that was also assisted by Bardreau for the second consecutive goal and suddenly the Phantoms were up 3-0 and Montembeault was headed for the bench to make way for relief netminder Evan Cowley.

Springfield thought they had scored early in the second period but the goal was waived off due to goaltender interference with Jayce Hawrlyuk contacting John Muse.

Lehigh Valley pushed the lead to 4-0 a few minutes later while Bobby Farnham was sitting out a slashing call. At the eight-minute mark of the second period the Phantoms notched the man-advantage marker that also received a helpful bounce along the way. Greg Carey’s pass from the right wing looking for Matt Read on the backdoor instead hit off the leg of a Springfield player and bounced back to Varone on the right of the cage for the tap-in. Varone’s two-point night with a goal and assist now puts him at 49 points on the season, good for second in the AHL.

Springfield broke through at 10:19 of the second period with Chase Balisy quickly finding a puck on the left of the cage after a hard slapshot careened back out off the end-boards. His 11th of the season cut the Phantoms margin to 4-1.

The Phantoms beat Cowley again on the power play in the closing seconds of the middle frame. Phil Varone shook off a harsh check into the boards and popped right back up to find an open Oskar Lindblom on the backdoor at the right side of the crease for the tap-in with 35 seconds left in the second for a 5-1 lead.

Then the Phantoms struck for three straight to open the third and put the game out of reach.

Brennan connected on a shot-pass that was deflected in by Corban Knight just 24 seconds into the final period for a 6-1 lead.

Then the Phantoms rushed into the zone and Travis Sanheim found Aube-Kubel open in the right circle for the nifty chip to make it 7-1 at 3:10 into the third. The assist was Sanheim’s ninth in 10 games with the Phantoms and was also good for his tenth point.

Dryden Hunt of Springfield deflected a Tim Erixon slapper less than a minute later to provide for the 8-2 final margin.

Lehigh Valley went 2-for-5 on the power play and now has six power-play goals in its last four games. Springfield finished 1-for-6 on the man advantage. The Thunderbirds out shot the Phantoms 38-25.

The Phantoms fell one goal shy of the all-time franchise record of nine last accomplished by the Adirondack Phantoms on April 1, 2011 in a 9-5 win over the Albany Devils.

The Phantoms seek their sixth consecutive win when they return to PPL Center this Saturday at 7:05 p.m. against the Hartford Wolf Pack. The Phantoms are also at home this Sunday at 5:05 p.m. against the Wilkes-Barre/Scranton Penguins. Saturday is Go For Gold Night featuring the debut of specialty gold-style jerseys that will be available via auction immediately after the weekend finale. Sunday’s game is meLVin’s Birthday featuring all of his favorite mascot friends joining him in a massive mascot celebration for the ages! Tickets for upcoming Phantoms games are available at PPLCenter.com or by calling 610-347-TIXX [8499]