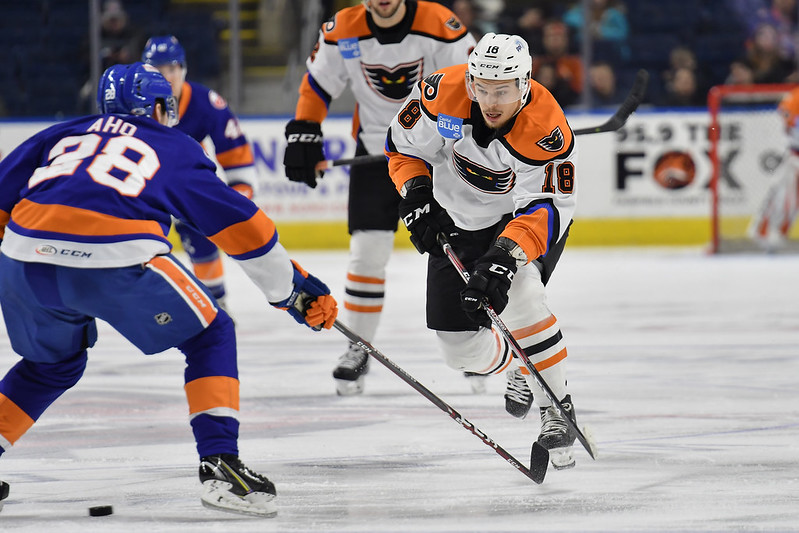 Bridgeport, Conn. – The Lehigh Valley Phantoms cranked up a season-high eight goals in a wild win at the Bridgeport Sound Tigers on Wednesday night, 8-5.

Greg Carey (14th, 15th) and Carsen Twarynski (3rd, 4th) paced the attack as both notched two-goal games. Twarynski almost had a hat trick with a shot earlier in the game that hit off the post.

Morgan Frost (11th) picked off an errant pass at center and buried his blast on the rush to the left circle to extend his goal-scoring streak to three games since his return from the Philadelphia Flyers last week.

Seven Phantoms registered multi-point nights including Andy Welinski who had a goal and an assist and four others with two assists each; James de Haas, Cal O’Reilly, Reece Willcox, Kyle Criscuolo. Welinski’s goal with just 4:22 left came with the Phantoms protecting a narrow 6-5 lead. Andy Andreoff (8th) sealed the win a couple minutes later with a long empty-netter. 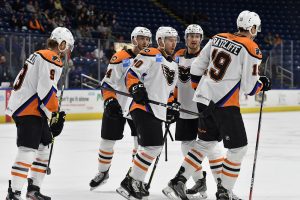 Seven Phantoms goals came 5-on-5 before the empty-netter at the end. Lehigh Valley had no power play in the fast-paced track-meet style game in which both teams traded chances rushing back and forth.

J-F Berube entered in relief in place of Alex Lyon when the Phantoms trailed 2-1 just four minutes into the game. Berube turned aside 32 of 35 Bridgeport efforts for a quality win. The Sound Tigers also changed goalies with Jared Coreau entering in place of Christopher Gibson early in the second period when Frost’s goal game the Phantoms a 3-2 advantage at the time.

The Phantoms are 3-1-0 in their last four away games and are 5-2-1 overall in their last eight. Lehigh Valley is 3-1-0 against the New York Islanders’ farm club.

Lehigh Valley sparked the combined 13-goal explosion on David Kase’s 6th of the season driving from the left corner straight to the net and pushing a backhander through Gibson for a 1-0 lead at 1:18.

But Bridgeport would score goals just 19 seconds apart to take its only lead of the night. Otto Kouvula (9th) on the power play after a speedy entry into the zone was followed in cloe succession by Grant Hutton’s flip past Lyon for a 2-1 Sound Tigers’ lead.

Lehigh Valley equalized at 8:38 into the game with James de Haas at the left point spotting Cal O’Reilly open at the bottom of the right circle. The veteran center waited a tick while Carey made his move to the crease and O’Reilly’s connection was on the money for Carey’s deflection at the net-front to forge a 2-2 deadlock less than nine minutes in.

Carsen Twarynski almost broke the tie with 3:00 left in the period on a nice give by Kyle Criscuolo but his big shot hit off the post and stayed out.

Morgan Frost picked off an errant cross-ice attempt and took one stride before unloading at the top of the left circle for his 11th of the year. Frost has scored three goals and one assist in his three games with the Phantoms since his most recent return from the Flyers.

Carsen Twarynski scored back-to-back just over four minutes apart to stretch the lead to 5-2. Criscuolo had a pick-off to set up Twarynski to the left of the cage for a 4-2 lead at 10:45 into the second. Then Twarynski rushed up the left wing and pushed a puck that deflected of a diving Bridgeport defender and through Jared Coreau for a 5-2 advantage.

Bridgeport would score consecutive goals again late in the period to cut the Phantoms’ margin to one. The tallies 70 seconds apart from Robert Carpenter (2nd) on a shot from behind the net that somehow banked into the goal off the skate of Berube and then Travis St. Denis on a rebound to the left of the net that made it 5-4.

But Reece Willcox at the right point spotted Cal O’Reilly on the left of the crease. O’Reilly was initially denied but the loose puck laid in the right side of the blue paint with Carey spotting the opportunity and arriving first for the tap-in and his team-leading 15th goal of the season with just 30.1 seconds left in the middle frame.

The Phantoms held on to their 6-4 advantage until the midway mark of the third when Jeff Kubiak found a way down low with a backhander flipped top shelf.

Berube came up with a huge save on Parker Wotherspoon’s blast from the slot by waving his glove and barely deflecting away the potential tying goal.

Andy Welinski moved up from the left point and saw daylight on the stick side to beat a possibly screened Coreau for a key breathing-room tally with just 4:22 remaining for a 7-5 advantage. And Andreoff finished the crazy scoring stretch with his long empty-netter with 2:15 left to clinch an 8-5 win.

Defenseman Mark Friedman was recalled to the Philadelphia Flyers hours before game-time. Eric Knodel was recalled from the Reading Royals of the ECHL and made it to Bridgeport in time to help on the team’s blue line.

Lehigh Valley (23-24-7) continues its four-game road-trip on Friday at the Rochester Americans and Saturday at the Syracuse Crunch.

NEXT TIME OUT: The Phantoms conclude their four-game road trip at Rochester (February 21) and Syracuse (February 22). They will return home on February 28 for a weekend series against the Charlotte Checkers as the team celebrates the 40th Anniversary of the 1980 Miracle on Ice.