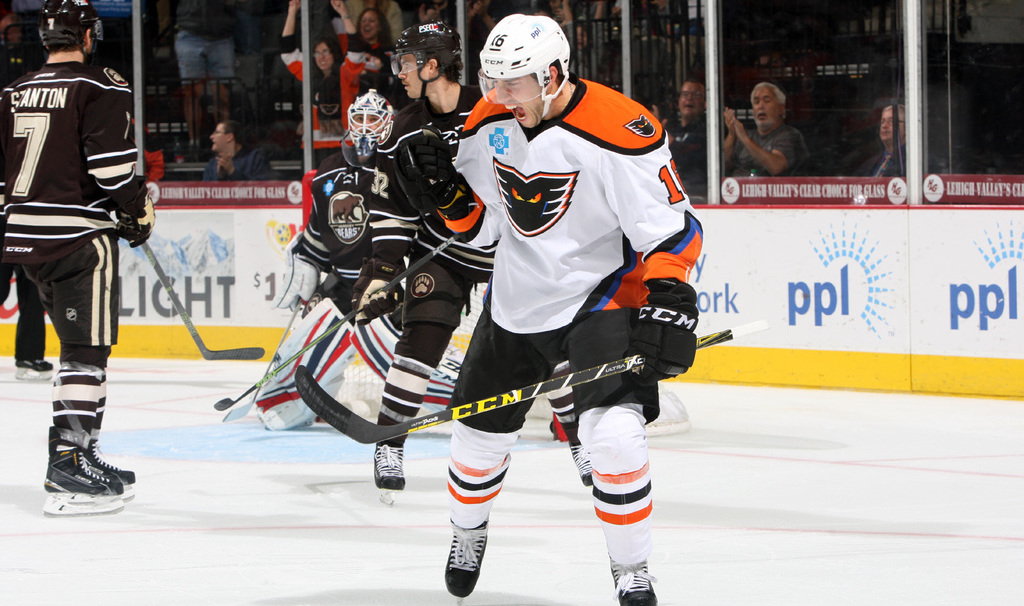 Lehigh Valley, PA – After falling behind 2-0 through two periods Wednesday evening, the Lehigh Valley Phantoms refused to pack it in. In fact, they did quite the opposite.

Goals from Petr Straka and Danick Martel in the third period forced overtime with the Phantoms’ rivals, the Hershey Bears, and Nick Cousins converted the game-clinching score to give the resilient Phantoms a 3-2 victory at PPL Center.

The victory pushed the Phantoms to 12-12-1-0 for the season as the team moves closer to the top of the Atlantic Division standings by the day. Lehigh Valley currently occupies the fourth position in the Atlantic Division standings with the top four teams in each division set to qualify for the 2016 Calder Cup Playoffs. Meanwhile, Hershey (12-6-1-5) was served its first overtime loss of the season. The two Pennsylvania rivals have traded victories in their first five meetings of the season, with Lehigh Valley once again grabbing the edge in the season series, 3-2. All three of the Phantoms’ victories have included bonus hockey; their first two wins happened in thrilling shootout fashion in November.

Leading the Phantoms with two points apiece, Taylor Leier notched two assists while Martel tallied an assist to go with his game-tying goal. Goalie Anthony Stolarz earned his 10th win of the season by turning aside 19 of Hershey’s 21 total shots.

The Phantoms took no time launching a relentless offensive attack, taking eight of their 11 first-period shots in the first ten minutes of the game. However, it was Hershey that landed the first blow. At the 6:09 mark of the period, right after a cross-checking penalty on Samuel Morin put the Phantoms down a man, the Bears pulled off a series of one-touch passes resulting in Connor Carrick’s sixth goal of the year from the top of the left faceoff circle, assisted by Chris Bourque and Riley Barber.

At 9:06 in the second, while each team had a man in the penalty box, Bears center Travis Boyd skated around the Phantoms defense and found defenseman Mike Moore near the net. Moore put away the one-timer for his second goal of the year. Madison Bowey tallied the secondary helper.

Straka cut the Bears’ lead in half 11:22 into the third when he skated down the left wing and sent a shot right past Hershey goalie Dan Ellis. He extended his team-leading mark to 15 goals and once again tied the Texas Stars’ Devin Shore for tops in the AHL. Colin McDonald and Martel assisted the goal, McDonald’s fourth and Martel’s fifth helpers of the season.

With under three minutes to play and the Phantoms pressing, Leier then brought the puck to the left side of the Hershey blue line and placed a pass precisely in front of Martel, who brought it home for his ninth goal of the year. Morin tallied the secondary assist.

Many fans were on their feet as the game continued into overtime. Leier sent another perfect pass at 3:45 into the three-on-three session, this time forward to a breaking Cousins, who buried it to end the game.

The Phantoms’ energy was evident throughout their comeback, as they outshot the Bears 16-6 across the third period and overtime. They also posed a stiff penalty kill, holding Hershey to one power play goal in six opportunities. Lehigh Valley’s penalty kill has now surrendered just four power play goals over the team’s last 10 games going an impressive 40-for-44 during that stretch.

The Bears will be back in Allentown again next Friday, Dec. 18, to continue the teams’ heated competition.

The Phantoms continue their five-game home stand at PPL Center with a pair of games this weekend. First, on Friday, December 11, the Wilkes-Barre/Scranton Penguins visit downtown Allentown for the first time this year in a game presented by The Morning Call. Friday’s game features a t-shirt giveaway where the first 8,500 fans in attendance will receive a free Ugly Holiday Sweater Phantoms shirt.

Then, on Saturday, December 12, it’s the annual Teddy Bear Toss presented by Dan’s Camera City when the Springfield Falcons come to PPL Center for a 7:05 p.m. showdown. Fans are encouraged to bring new teddy bears or stuffed animals to the game and throw them on the ice when the Phantoms score their first goal. All bears and stuffed animals will then be donated to Valley Youth House to be distributed to children across the Lehigh Valley. Fans are then encouraged to stick around after the game for a Post-Game Skate with Phantoms players presented by Big Woody’s Sports Bar & Restaurant.

Tickets for both games this weekend, along with each of the Phantoms’ 26 remaining home games, are available now at pplcenter.com, by calling 610-347-TIXX [8499] or by visiting the Mealey’s Furniture Box Office at PPL Center [701 Hamilton Street].