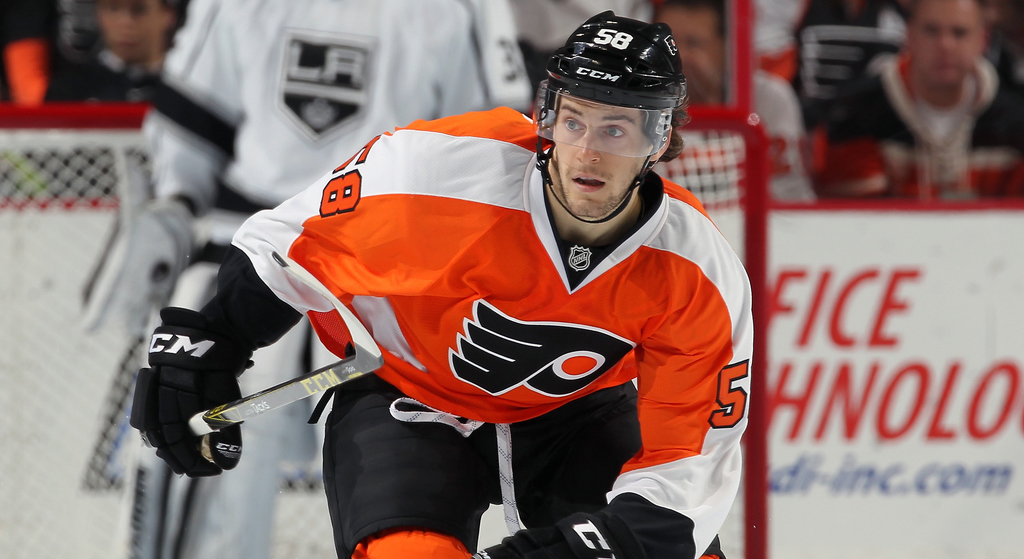 They say anticipation is better than the real thing. That really depends on who you’re talking to.

“Everyone says the show is the best hockey league in the world for a reason,” said Lehigh Valley Phantoms forward Taylor Leier with an ear-to-ear smile. “It was one thing to hear about it, but it’s another to live it. It was surreal. It was unbelievable.”

The show, of course, is the National Hockey League, and Leier’s excitement comes from recalling a nearly two-week stint he enjoyed at the game’s highest level in mid-November.

In the midst of back-to-back games at PPL Center in downtown Allentown, Leier and his teammates were coming off a convincing 7-1 victory over the Rochester Americans when dream became reality for the 21-year-old native of Saskatoon, Saskatchewan.

“I was in the weight room, which is directly across the hallway from the coaches’ offices and where management is,” Leier recalled. “I was just riding the bike when Barry Hanrahan [Philadelphia’s Assistant GM] came across and approached me and told me Mr. [Ron] Hextall wanted to see me. I didn’t really know what to expect and what was going on, and then he told me the news.”

It isn’t hard to guess what Leier did next.

“I was so excited. I ran outside and called my home phone and my dad answered,” Leier remembered. “I asked him to put mom on the other line so I could tell them both at the same time. I think my mom almost started to cry and my dad was kind of speechless. He didn’t really know what to say. They were just super surprised right after a game. It was awesome.”

And from there, the whirlwind really began.

A drive from Allentown to Philadelphia. A 6:30 a.m. wake-up call. A 9:00 a.m. flight from the City of Brotherly Love to Raleigh-Durham International Airport in North Carolina. Lunch. A nap. And then his first career NHL game.

“I was so excited,” Leier recalled with a bounce in his step similar to the one he incorporated into his very first shift. “Probably had two or three hours of sleep and then maybe a half an hour nap so it was straight adrenaline. I felt really good too, it was weird. It was all adrenaline for sure.”

Leier recorded nearly seven and a half minutes of ice time that evening as the Flyers earned a 3-2 overtime victory over the Carolina Hurricanes. He didn’t record a point and produced just one shot on goal, but it’s an evening he won’t soon forget.

“I don’t know why but I wasn’t as nervous as I thought I was going to be before the game,” Leier said of his NHL debut. “I’ll never forget that. It was surreal.”

In all, Leier appeared in six games during his first NHL call-up. He averaged nearly eight minutes of ice time per night and recorded just three shots on goal, but the value of his two-week experience goes far beyond any statistical outcome.

“I felt confident and comfortable. I had a couple chances in a few of the games. The guys up there were really comforting. They made me feel like a part of the team right away, which helped a lot.”

And it’s no surprise to hear the kind of impact his first dose of NHL action had on Leier’s outlook for the future.